Catherine O’Leary: Felt in the Soul

Catherine O’Leary is one of Australia’s leading felt makers. Fibre Arts Take Two had the fortune to talk to Catherine about her dynamic and sculptural art.

Catherine’s Friday Feature Artist Interview can be found at the bottom of this page.

With formal training in Fine Arts, Catherine O’Leary’s portfolio spans thirty years. Crafting wool felt since the 1990s, Catherine is a master of form and substance. Her three-dimensional forms, whether wearable or not, are all strikingly sculptural. She uses mostly recycled fabrics to create her garments which she styles into elegant, evocative designs. Artist, author, mother, grandmother, teacher, and now even filmmaker, Catherine took time out of her busy schedule to talk with Fibre Arts Take Two.

Catherine began her artistic career in fine arts. “I studied fine arts in the early 80s, majoring in drawing. I was drawing for four years, which is a good foundation. It’s developing an eye, it’s being able to see things, break things down to basic shapes. It was a good basis but I always enjoyed stitching, embroidering, knitting and textiles in general during my downtime. That was my happy place. I suddenly realised one day; why can’t I just be doing this? I decided to just do what I love and see where it would take me.” 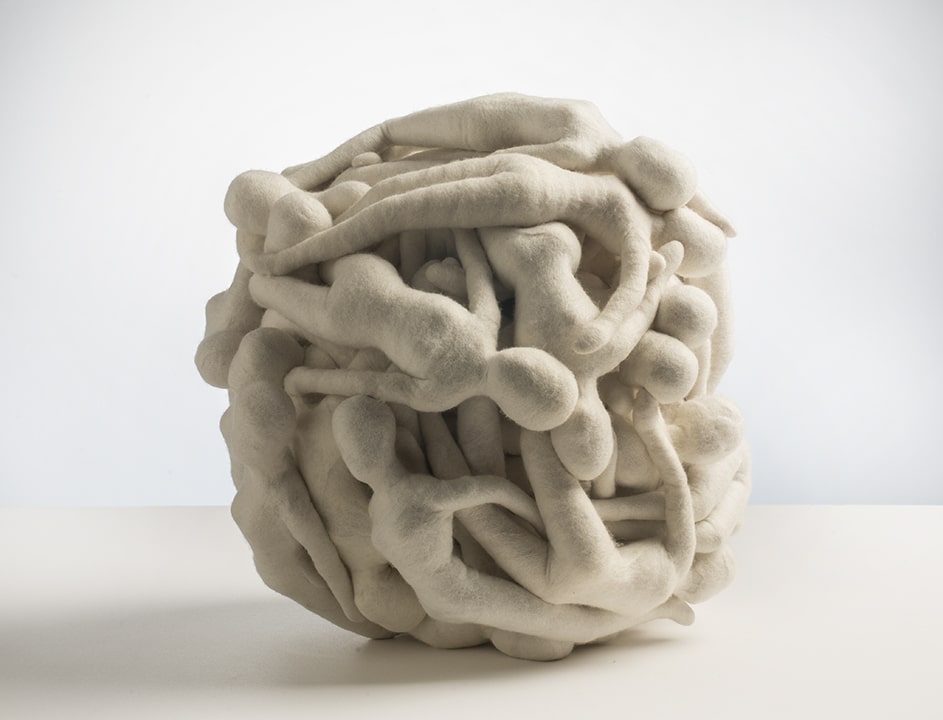 A feel for felt

As it happens, textiles went a long way for Catherine. ”I didn’t really know a lot of technical skills. I just did what I thought was an idea so in some ways that made my work quite original.” Eventually, Catherine found her medium in wool felt. “I came across felt making in a book, and I thought it looked so interesting. I wanted a cloth to embroider that was soft on the hands. And so I just pretty much made awful felt for about five years trying to work out how to do it well.”

Catherine honed her skills and found a support base in Australia and abroad. “In the early 90s, different groups started up. We brought tutors in from overseas, and European tutors who felt making is part of their culture. We got hothoused in Australia in feltmaking and we could just jump ahead creatively independently and individually.”

Catherine has applied her feltmaking skills to clothing and sculpture but doesn’t see much difference between the two. “I see clothing as wearable sculpture. Clothes have to be 3D, and have to sit around an organic form, the body. So I find whether you wear it or whether you just have it sitting as a sculpture, it’s still a 3D, beautiful shape. A lot of my work involves looking at shapes, patterns.”

Clothing workshops that are so much more

Catherine’s highly successful clothing workshops break down the barriers between fashion and art. “People often come in thinking they’re going to be making just a garment, they don’t realise that it’s really like a painting. I don’t advertise it as that because sometimes people get a bit intimidated by the idea that ‘I’m gonna have to be designing’ because I know that they’ll do a wonderful design anyway. So I like them to just work more instinctively and do surface design.”

Catherine lets her workshops expand each student’s concept of their own artistic capabilities. “I don’t know what happens to people when they become adults! They lose that sense of adventure or they get a bit too stereotyped into fashion. Or set in their ways about which two colours go together. But I think anything goes really if you want it to you just make it happen.” 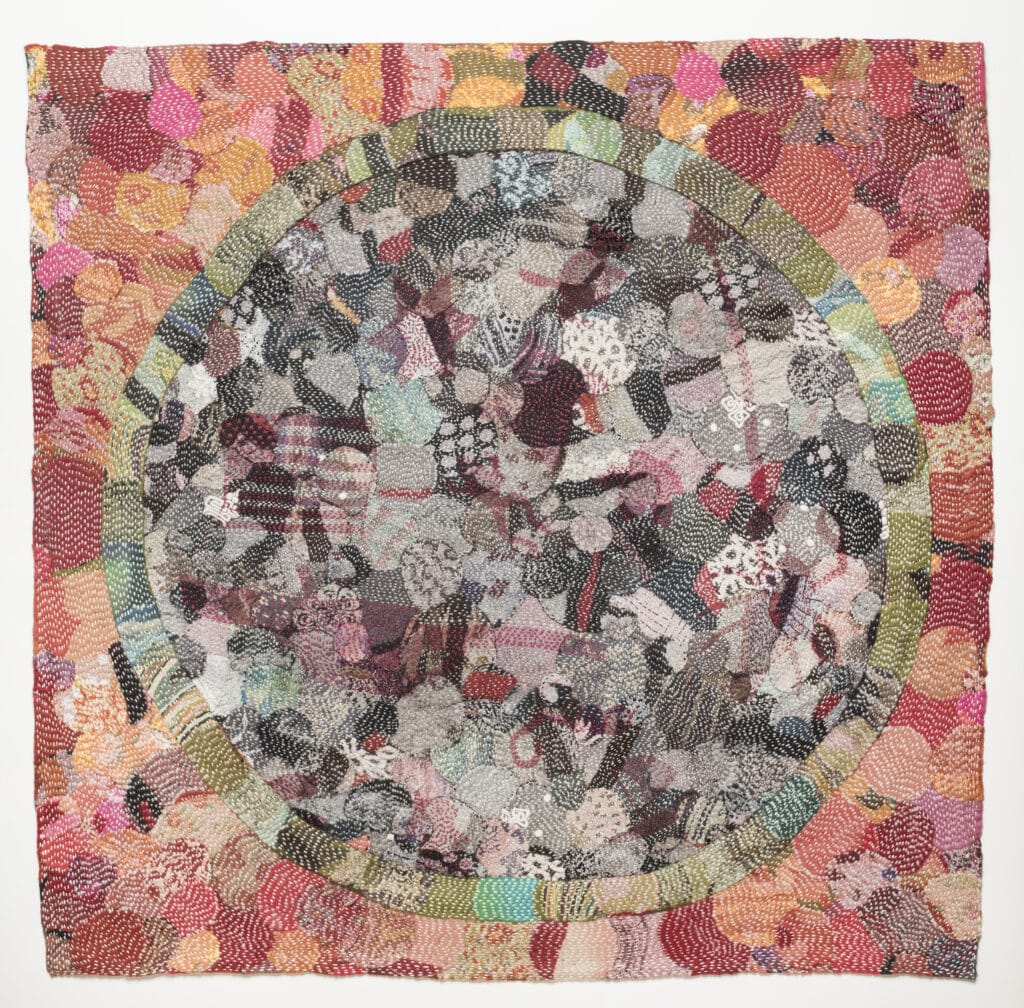 One of Catherine’s most fascinating pieces is called Refugees. “It’s about two metres in length from the top and it’s very lightweight. So if you just walk past it, it sort of moves, just even breathing on it makes it move. It has these hollow forms inside it, which are like little babies that are belted over a baby doll. And then I’ve extracted the doll, and then it’s all been heavily stitched. So they are hollow but they don’t look alike. They look heavy, and they’re all entwined and sort of trapped. At the time, there was a lot of refugee political talk and I just felt so sorry for the children. So I made the sculpture as my comment on it.”

Catherine enjoys adding an air of mystery to works like Refugees. “I like making things that people can’t work out how I did it. It’s fun to make things that are hard to understand, that other feltmakers can’t work out.” At the same time, this playfulness can even surprise Catherine at times. “I always work instinctively and I don’t ever plan anything, I just let it grow. When it feels right to finish, I finish. But it’s only looking back that I sort of understand why I have done it in lots of ways.”

Recently, Catherine has made the foray into filmmaking. “I’ve been making it with my partner Patrick. He’s been filming and we’ve been working together. It’s trying to capture the idea of male beauty. It’s quite striking what you can capture with photographic equipment. To have the cloth moving around with the body. Trying to break down those barriers of stereotype, that’s what the film is really about, just a celebration of beautiful cloth on beautiful bodies, not traditionally beautiful, but they’re beautiful anyway.”

Art has always been with Catherine and always will be. “It’s for the soul, you do it for your health, you do it because that’s what you need to do. And you’ve got to get as much made and created in that short life that we have. And I just feel really strongly about that. Everything is creative with me and my brain never stops. I’ve been very lucky to be able to do that.” 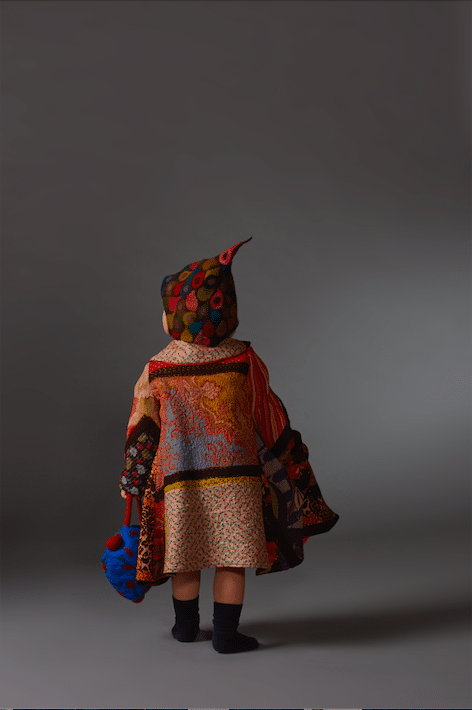 Catherine O’Leary is an Australian Artist, based in Melbourne who works primarily in the Textile Arts. With formal training in Fine Arts, Catherine’s portfolio spans thirty years. Crafting wool felt by hand is a technique that Catherine has been exploring since the 1990s.

She has mastered the art of feltmaking and utilises it as a vehicle for the creation of three-dimensional forms. These forms consist of wearable garments such as jackets, dresses, skirts and innovative sculptures.

Garments are constructed from very few pattern pieces, styled into elegant, evocative designs. Most of the fabric used has been recycled, making her practice sustainable and environmentally conscious. 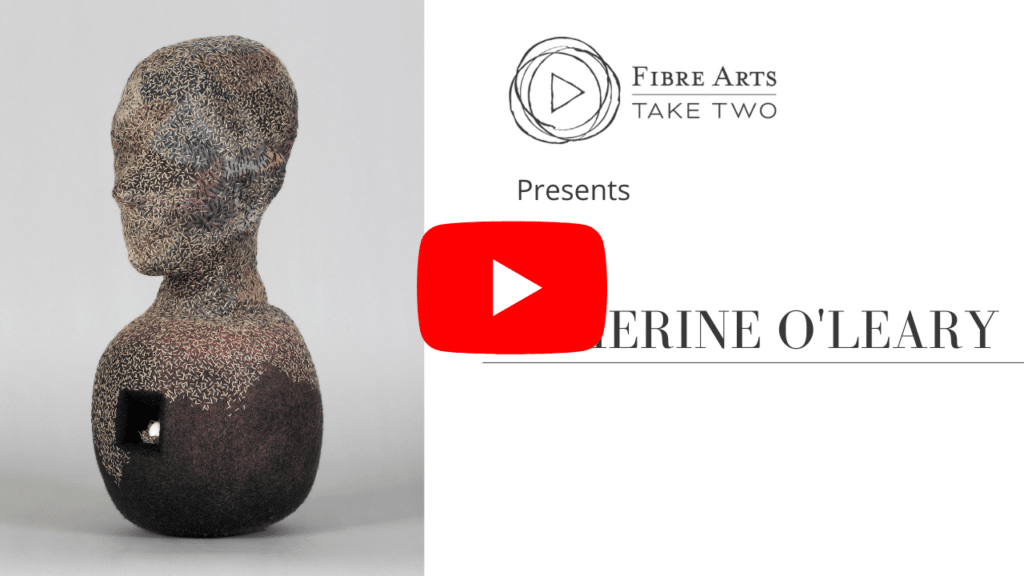