Beverly Ayling-Smith: The Fabric of her Being

Beverly Ayling-Smith makes art from the fascinating subject of pain. She shared with Fibre Arts Take Two how mourning and fabric can come together.

Beverly’s Friday Feature Artist Interview can be found at the bottom of this page.

As a textile artist and researcher, Beverly Ayling-Smith examines the emotional states of mourning and melancholia. She focuses on the emotions of grief, loss and absence, using techniques such as the mending and staining of cloth. Her work explores how she can imbue cloth with emotion and make a connection with the viewer to allow reflection and consideration of the losses we have all experienced.

Fibre Arts Take Two was privileged to talk to Beverly about the concept of art and mourning.

Art was not Beverly’s first calling. In fact, she held a long and successful science career before making the switch, “When I left school and went to university,” Beverly says, “I studied microbiology and ended up working in antibiotic research. Then later, I worked in the field of hospital-acquired infections. We would test if many people had the same infection on a ward; it was all to do with infection control.” 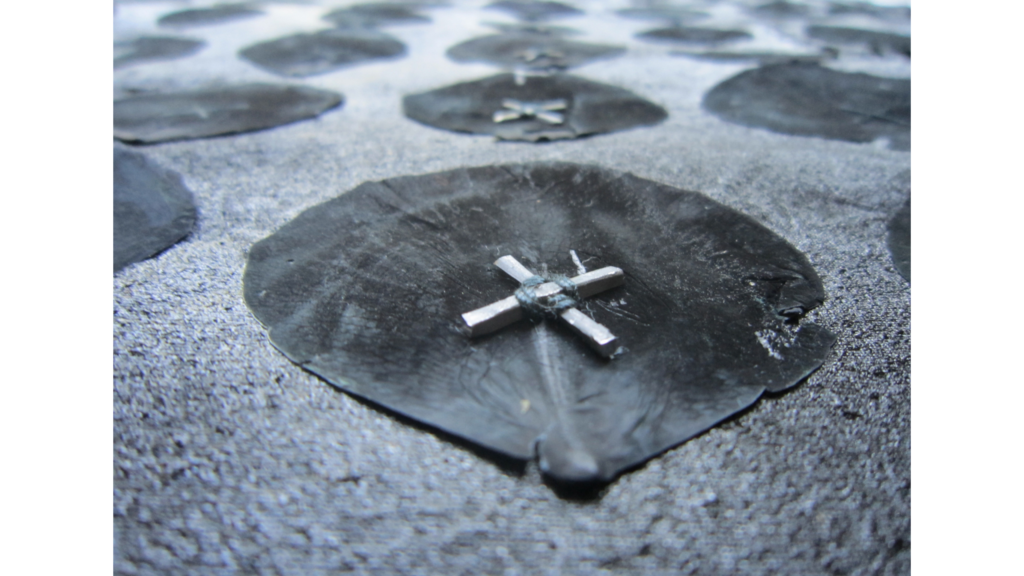 It was inevitable that science would have an impact on Beverly’s work in fibre arts, “I do credit my science background with the way I work because my sketchbooks resemble experiment books. I create samples, have ideas, put them in my book, and then write comments on what to try next. Sometimes I find myself completing a series of experimental pieces, not because they’re any better than the ones I did before, but because they’re on my list.”

The scientific method has also become part of Beverly’s artistic process, “I was doing some work recently,” she says, “Where there was a certain process that was new to me, and I couldn’t quite make it work. I was screen printing and adding things on top of that. In the end, I went, ‘Right, I’ll do one for five minutes, one for six minutes, one for seven minutes’, so that I could pinpoint exactly the right amount of time I needed.”

Beverly discovered Freud while studying, and his work permanently impacted her. “He said that when someone dies,” Beverly says, “you mentally hold up these memories and images of the person, and that enables you to come to terms with the fact that they’re not there. You think about them and say, ‘okay, they’re not here anymore’. It’s this constant, remembering, repeating and working through memories that means you can detach your libido and lifeforce from the person. And then you can move on.”

Beverly has worked hard to embody Freud’s theories in her work, “I started using quite a lot of waxed fabric, like the waxed cloth that was put over the face in the Middle Ages. One piece was bought by somebody who bought it for her therapist because, for her, it showed what she felt like when she was bipolar. And she thought that really showed how she felt when she was in her depression phase.”

Cultural differences in mourning, like the western use of black and the eastern use of white, also fascinate Beverly, “I went to India a few years ago,” she says, “and I was talking to some women there about mourning. They took me to a sari shop and pointed out to me all the different ones that were used for women to wear when they were widowed. They gave me some, and I did actually make a piece of work. It was a sort of a cone standing on its point, and it was made from strips from the sari. The strips are about a centimetre wide. I machine-stitched them together and made a sort of wire framework. Then, as you reach the point, the white was stained until its bottom was completely black.” 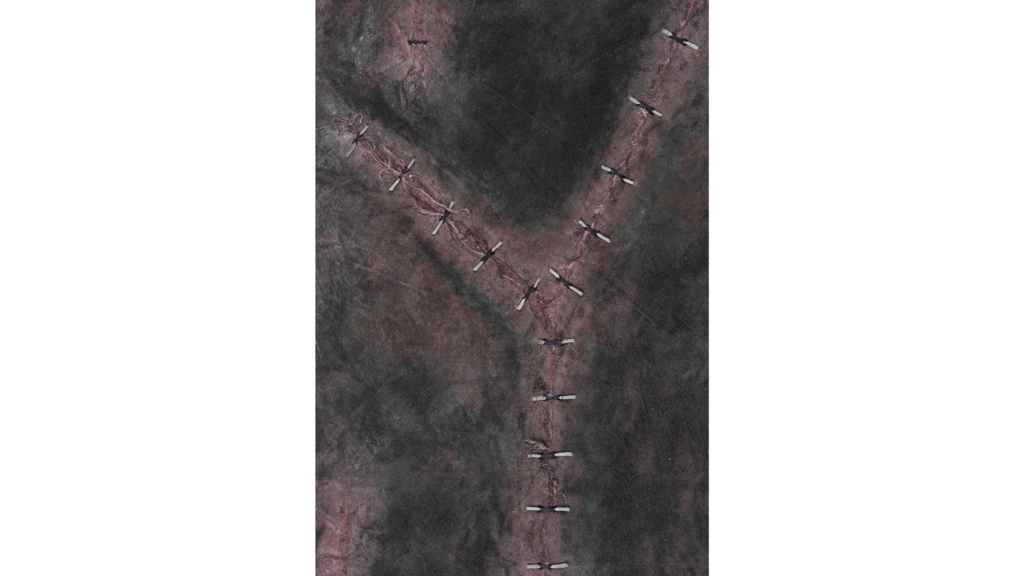 As an artist, Beverly understands the frustration of having her work misinterpreted. “It is difficult,” she says, “it’s your creation, and you’ve made it for a reason. And then you put it on the wall in a gallery, and people misinterpret it or don’t understand it. To a certain extent, you have to let that go because, you know, you can’t be standing over everyone saying, ‘This is what it means’. It is a bit difficult when people don’t know.”

Beverly has certainly had experience with the issues of interpretation. “I made a series of works with a child’s dress in it that’s called the Resonance of Loss,” Beverly explains, “I was thinking about the loss of childhood because I was thinking about children leaving home and that kind of thing. And several people asked me if I’d had a miscarriage, which I hadn’t, and I didn’t want to give that impression. It specifically said that I was thinking about the loss of childhood, but people don’t always read the information, so they take away their own interpretation. In the end, I decided not to use the child’s dress anymore because it was misleading. And despite what I had written and said, some people just didn’t believe me. But I didn’t want to give a false impression. It’s interesting when you are there, and people misinterpret. What can you do? You can only put the information on the wall and hope people read it.”

Fabric is crucial to Beverly’s worldview. “Fabric is our second skin. That’s how people describe clothing,” she says, “But to me, this whole cloth thing is skin. The reason I tear and mend is to do with our experience of life events; it’s like, ‘This is the fabric of my being’. Things happen in life; they make a mark on you internally and externally, and this represents that.” 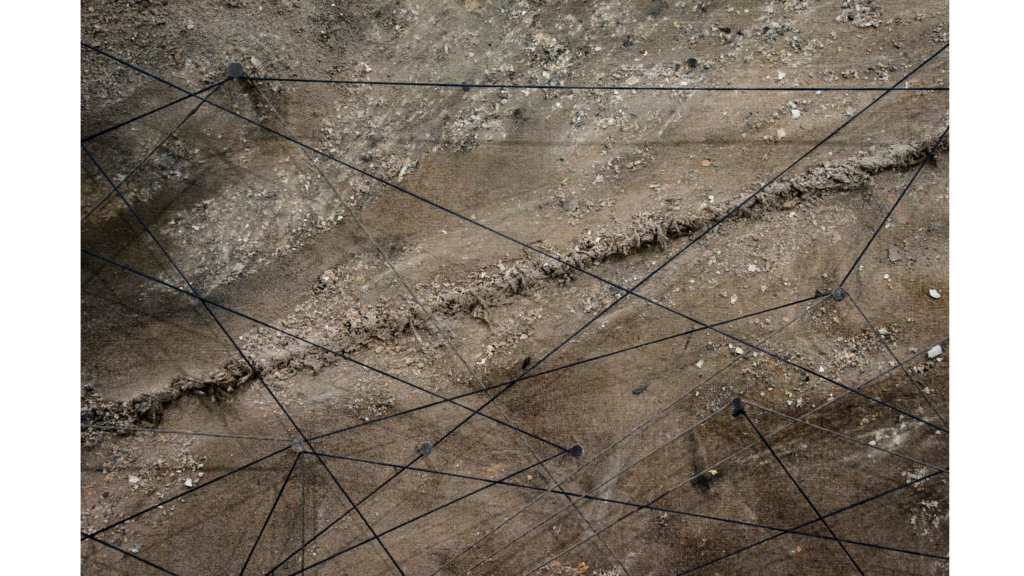 Beverly Ayling-Smith’s work focuses on the emotional dimensions of the words loss, absence and grief.

Beverly uses textiles in her work as we experience them in all aspects of our everyday lives and has built up a vocabulary, not only of words but of feelings and memories which we associate with them. We touch, handle, see, wear and use them. This experience allows us to consider their involvement in containing the history of our lives, emotions and memories.

Beverly often uses bed sheets as the main fabric in her work, either whole or as fragments.  Bedsheets act as silent witnesses to many natural processes in life, such as birth, puberty, pleasure, disease, decay and death. They bear witness to passions spent before sleep and dreams forgotten on waking. Although we endlessly strive to clean and launder them, they remain keepers of our memories, dreams and tears.

Beverly has a PhD, an MA in contemporary crafts, and a BA in embroidered textiles, and is a member of the Society of designer craftsmen. She has had solo shows and exhibitions across the UK, Europe, Canada, the US and Japan and has presented her research to conferences around the globe on the topic of cloth loss and memory and the language of grief in textile art practice. 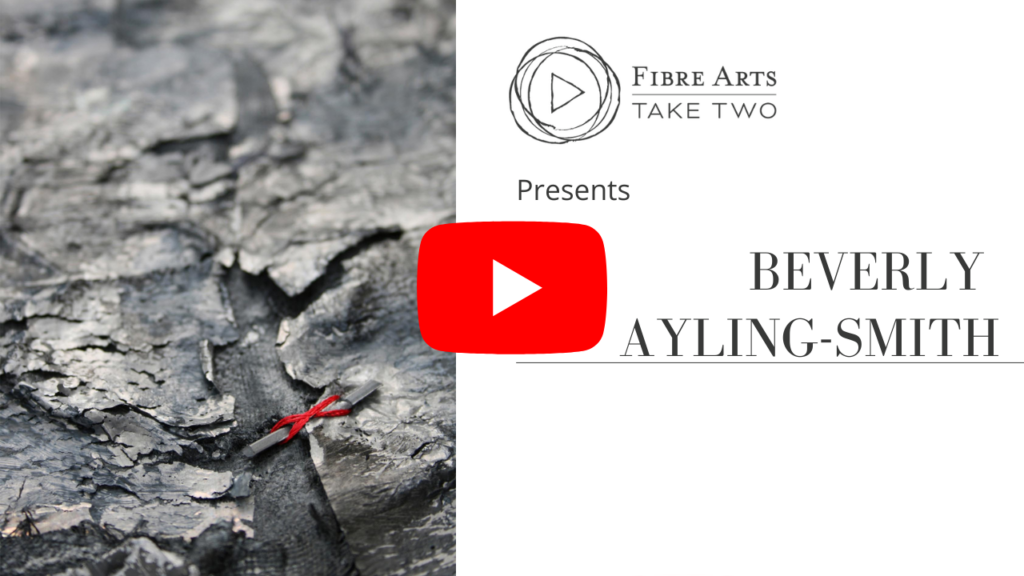