Kinga Földi is a Hungarian textile artist who uses an origami-based technique called pin-tuck. Fibre Arts Take Two had some one on one time with Kinga.

Kinga’s Friday Feature Artist Interview can be found at the bottom of this page.

After years as a bespoke fashion designer and costume and stage designer for renowned theatres and choreographers, Hungarian textile artist Kinga Földi decided to move into freestanding sculptures to slow down and express herself as a fine artist.

Kinga uses a technique called pin tuck to fold and sew every fold in the fabric. Kinga’s resume for both fashion and costume design is long and impressive after only a few short years of developing her craft as a fine artist.

Fibre Arts Take Two was honoured to spend time with Kinga to discuss her work and career.

Kinga’s time at university was integral to her development as an artist. “The university had five textile departments. One of them was woven textile design, and there was also industrial textile design and something more related to craft. And that’s what I really enjoyed. We learned a lot of techniques, and I could later incorporate some of them into my works.”

Even Kinga’s distinctive origami style has its origins in her university days. “There was a special work,” she says,  “When we had the task to create surfaces to manipulate the fabric. There was a theme. We had to create a series of works by basis, between matte and shiny. I worked with some synthetic fabric, but the interesting part was when I folded the fabric and sewed it, it really changed the shine. I can use the matte and shiny surfaces, and I learned where to cut and to mix them.”

Years later, Kinga put her skills to work as she solidified her unique style. “I came across a special branch of origami which is called tessellation when you don’t fold animals or plants, but you fold surfaces, and I started working with silk. I had to figure out how these creases would remain in the textile. I had to iron them, but I also glued another textile on the backside of the fabric, so it became more crispy and paper-like.” 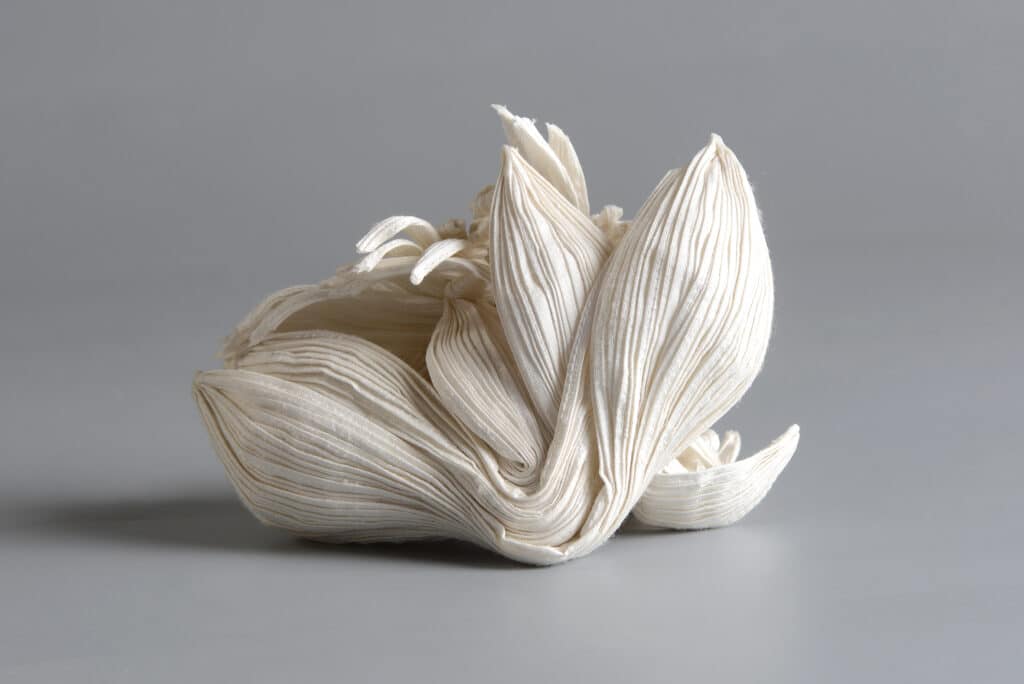 Not so fast fashion

“I learned fashion design, but I didn’t exactly study fashion design at the university,” Kinga says of her foray into the fashion world. “We had a Rococo-style competition, and it caught my attention. It took me a whole summer to make and then put it on the corset. It was really enjoyable work, and I thought, ‘I could make this forever’. That’s why I decided to create dresses, but not be a fashion designer. Because fashion was something different, too fast. And that, for me, there was very little art in fashion design.”

Kinga’s skill was in demand, and she had her own fashion label for a time. “I didn’t want to sell what I was making! They are my own children. So I worked for a commission and was really open to creating dresses. It turned out that everyone liked what I made but they wanted something more simple. And with less work. So it was cheaper but not so enjoyable. So that’s why I lost interest in dressmaking.”

While it may have seemed like an obvious next step with her elaborate designs, Kinga came to theatrical work through the back door. “Costume design came by accident,” she says.

“One of my old neighbours was a dancer and choreographer. At that time, he was thinking about making theatre pieces, and he heard that I wanted to design costumes for theatres because I didn’t find a place for my dresses. They were not so functional. He asked me to create costumes for his first piece in Hungary. And then other works came after that.”

Theatre brought new and different challenges for Kinga. “I created some origami dresses, and the director was very happy with it. But then they said, ‘Okay, but how will we wash it?’ I said you can’t wash it. Take it to the dry cleaner. ‘We won’t take it to the dry cleaner. We have to wash it in this theatre.’ So we had to figure out how these origami parts could be moved from the basic dresses to wash them.” 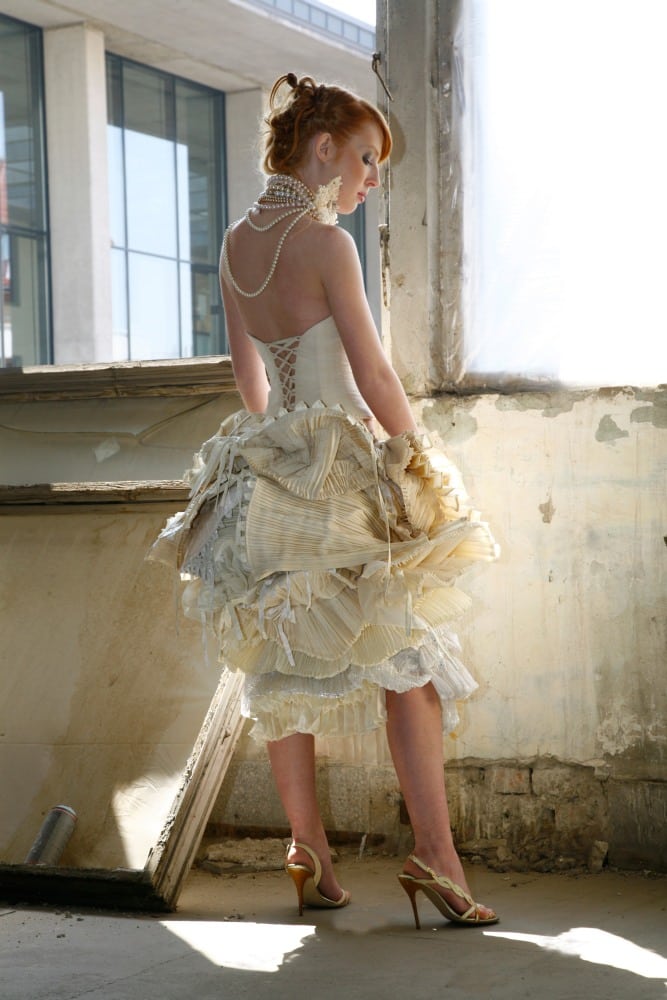 Sculpture and the end of deadlines

Always moving forward, Kinga has most recently been working with sculpture. “It was always very hard to focus on function in my work. That pushed me towards sculptures through the functionality. And the other thing I found challenging with my work was time. With costumes, you always have deadlines!”

Sculpture offered Kinga more time and flexibility.  “With the sculptures, it’s something different. I work with them, put it away, put it aside, begin another one, then I take the old one again and look at it and have new ideas again, and continue working.”

As an artist, Kinga hopes to leave a physical legacy of her time on Earth. “I hope to make objects that are worthy of being observed slowly and in great detail. By observing nature, a little universe of living sculptures is forming before my eyes. I want to leave something here. When I leave this world, something remains after me, some objects. I think that’s the greatest thing that someone can hope for.” 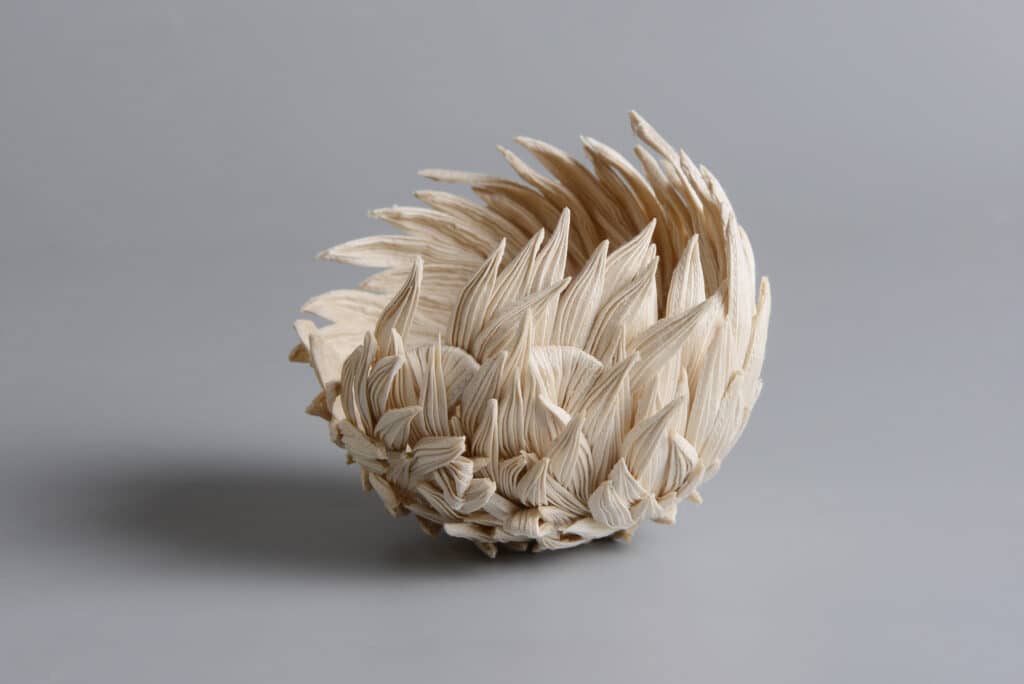 Kinga Földi is a Hungarian textile artist who first spent years working as a bespoke fashion designer and costume and stage designer for renowned theatres and choreographers.

She has now moved into freestanding sculptures to slow down and express herself as a fine artist. Kinga’s inspiration comes mainly from nature, and her beautiful silk sculptures resemble floral and animal forms. She allows the shapes, scents, and colours to flow through her veins and into the tips of her fingers to build up her own unique universe of plant and animal-like sculpture.

Kinga’s aim is to create objects worthy of being observed long and slowly. Living in an accelerated modern world among overstimulating devices, never having the chance to rest our eyes and souls, Kinga believes that this might be the greatest challenge for humans to conquer in the near future. She hopes that her sculptures could be such soul-resting objects. 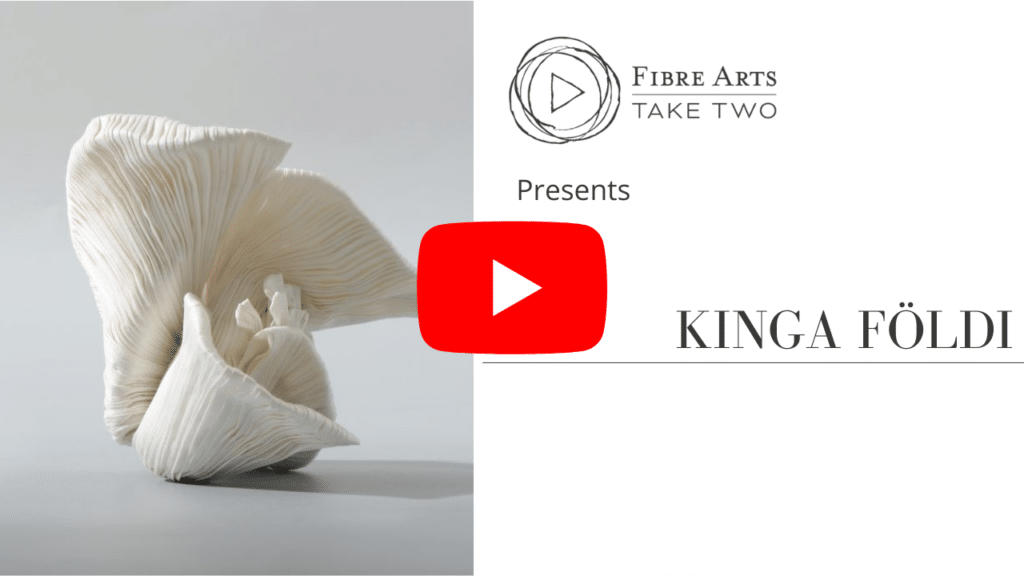