Minka’s Friday Feature Artist Interview can be found at the bottom of this page.

Minka Gillian’s woven sculptures have been examining the connection between the organic and the synthetic for decades, choosing polyester monofilament as her material of choice for its translucent glass light quality, which allows the viewer to catch glimpses of the often complex internal structure through the thin transparent shells.

Minka is living proof that both motherhood and a professional art practice can coexist. But in the pursuit to prove herself, the tight deadline for the first solo exhibition after childbirth almost took her life. Facing the reality of immortality at a young age had a profound impact on Minka’s works that examine the nature of our bodies. Our relation to the synthetic and organic world around us, both physical and mental. Minka’s practice ultimately involves a mix of conceptual issues around the relationship of the human body to the world and aesthetic concerns that arise from these formal relationships.

Minka has been a practising artist for over 20 years, already with nine solo exhibitions and a swag of group exhibitions to her name, and there’s still lots more to do and create. Fibre Arts Take Two had the good fortune to spend some time with the artist from her home on the central coast of New South Wales. 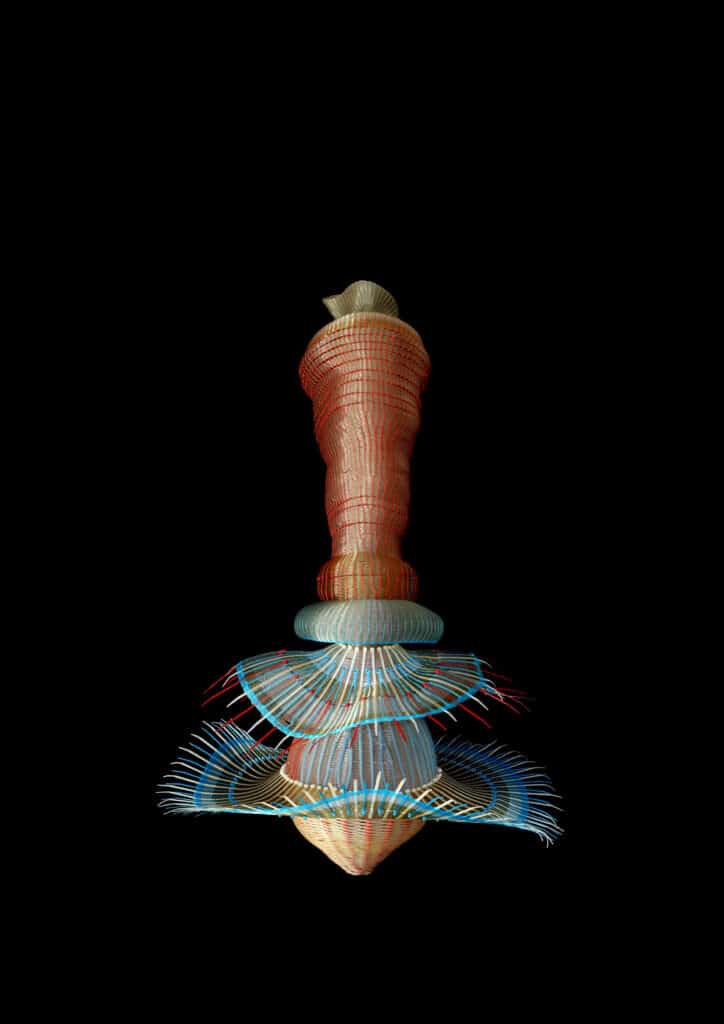 Minka comes from a legacy of weaving and basket making.

“When I was little, they used to have basket-making gatherings at our house. I think the first ever basket I made was a pine needle basket which I think I then kept cinnamon sticks in as logs for my Barbie. My dad is known in the basket weaving world as the Willow Man. He had an interest in basket making for a long time. When I was about 17 he enrolled me in a class,  jewellery making with basket making techniques. He did it with me as a sort of bonding exercise, which I was reluctant to do but, in the end, loved it. And then we both joined the basketmakers of Tasmania.”

As she progressed as an artist, Minka moved to more biomorphic shapes and formed a connection with filament. “Originally I was working in natural materials. I grew up in a house where you made everything yourself and you were very frugal, and I loved the idea that you could seemingly make something from nothing. So natural materials were sort of free and easy to use, and all I needed was sometimes a needle and a pocket knife and four scissors and that was it. I loved the simplicity.”

Eventually, nature itself steered Minka away from natural materials. “I actually got really sick, and I became allergic to all the natural materials that I was working with. So one of my teachers, Bob Jennings, suggested working with plastics and metal. Once I got onto it, I was hooked and I’ve been doing it ever since.”

Minka never lost her frugality though, “It so hurts to have to buy materials. That’s why a lot of materials are found materials as well, because I hate having to spend money.”

Minka’s recent exhibition was Mind Garden, where viewers were delighted with an array of colourful woven suspended sculptures to explore from a distance and up close, getting lost in the details and fully immersing themselves in the experience.

“Mind Garden was in the incinerator art space in Sydney and was made up of over 120 individual sculptures that I hung in a format like a C shape so that you could walk into the installation and be surrounded by all this work.”

“It’s called Mind Garden because it’s my imaginary internal landscape. Having it so people can walk into it, that was me sort of allowing people to enter into my world, my brain in a way. Each sculpture was an individual sculpture in itself but put together it made more sense they’re each a sort of an emotion or a memory or sort of a playful experiment with materials. I wanted people to feel really enveloped by the artworks.” 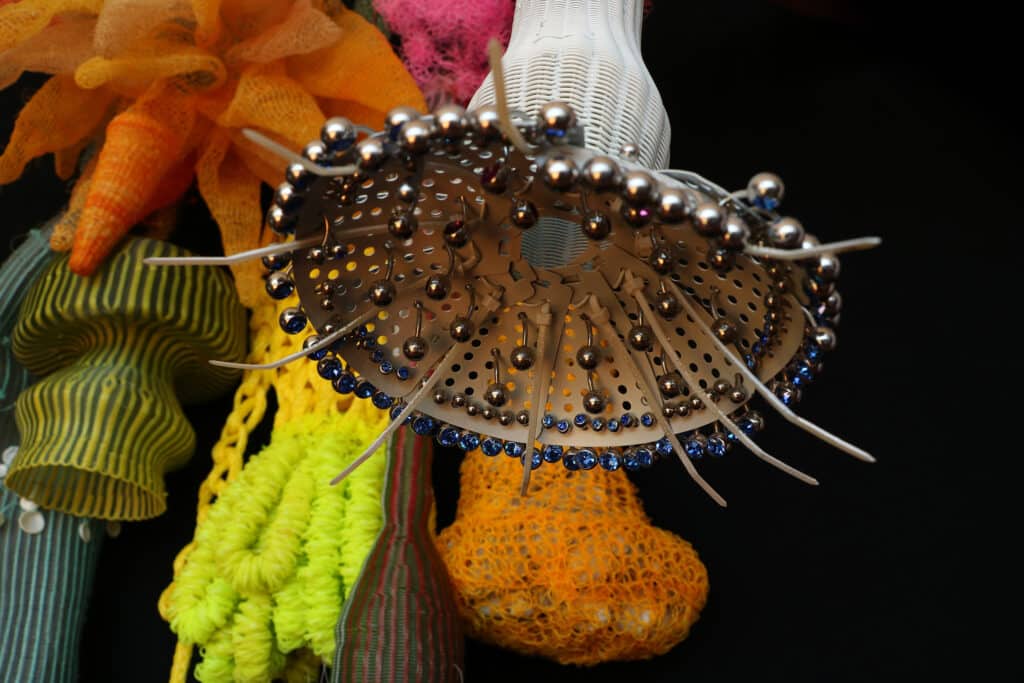 Minka’s art has a strong influence in religious iconography. “When I was maybe about fourteen or fifteen, I visited an uncle who was studying to be a priest. And he took me to an exhibition of Russian Orthodox icons. That had a really big influence on me and my painting.”

“Ever since then, I’ve been sort of a bit obsessed with halos and gold and sort of icon iconography.”

The impact of religious iconography has always stayed with Minka, despite not being religious herself. “Recently, all my drawings come out looking a bit spiritual or religious. And I’m not religious, but I think art is sort of my guiding light. It’s my religion basically!”

Five out of six

Some earthy words of wisdom from Minka; “There was something that one of my lecturers said to me. He said, for every six pieces of art, five will be crap and one will be good. So if you just acknowledge that at the beginning, then it takes the pressure off.

That’s a good quote for when you’re beginning. But as you get on, your chances of successful artworks gets better.” 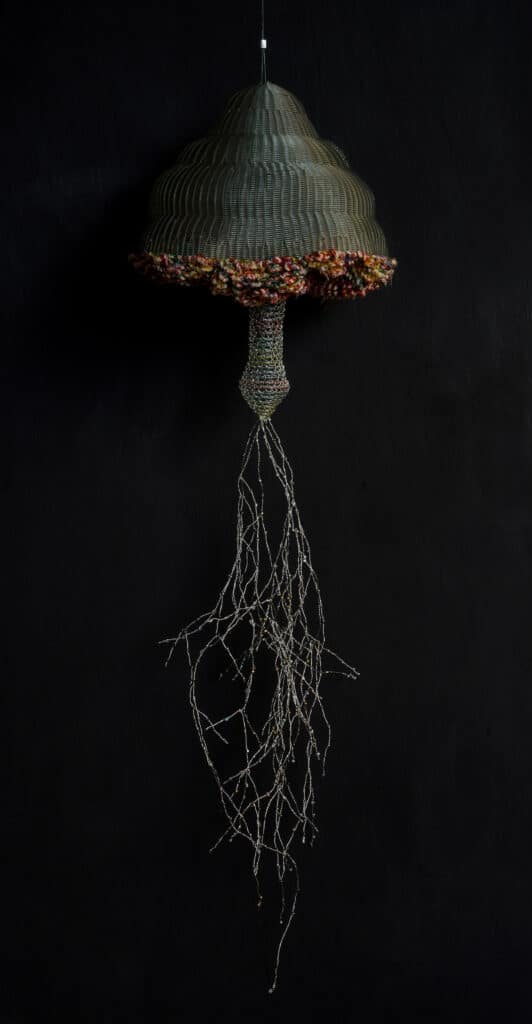 Minka’s work examines the nature of our bodies, our relationships to the synthetic and organic world around us, both physical and mental.  Her practice ultimately involves a mix of conceptual issues around the relationship of the human body to the world and aesthetic concerns that arise from these formal relationships.

Minka has been a practising artist for over 20 years.  Her work includes sculpture, painting, drawing, installation and public sculpture.  After spending considerable time in Hobart, Tasmania and Kyoto, Japan Minka’s studio practice is now based in the Central Coast, NSW. 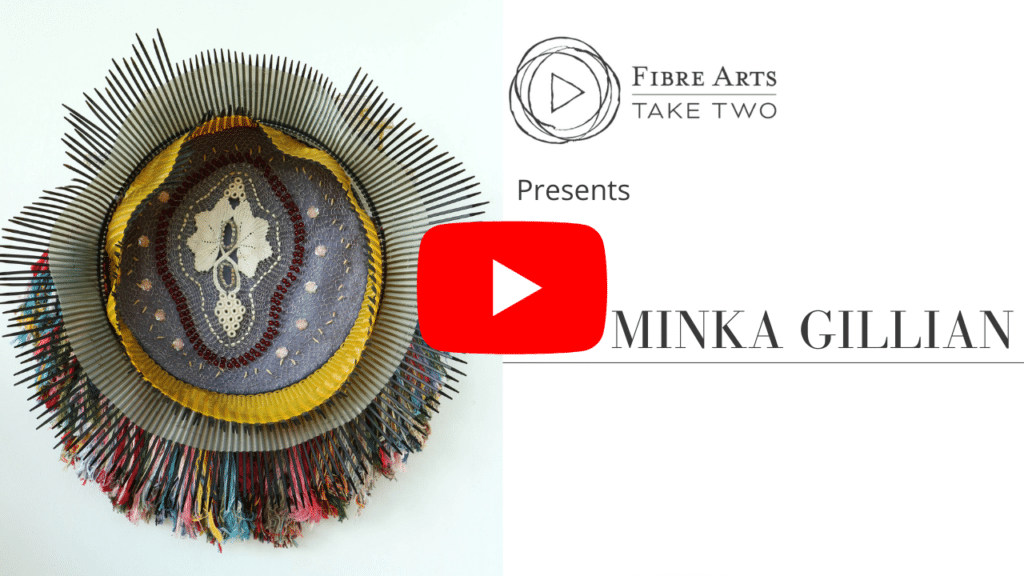