Bryony’s Friday Feature Artist Interview can be found at the bottom of this page.

Bryony Rose Jennings is a textile sculptor living on the beautiful Hampshire coast in England, working from home juggling her work as an artist with the mothering of her two young sons. Her beautiful works form an intriguing ‘textile menagerie’ of mice, monkeys, dogs and other animals recognised worldwide.

Bryony constructs her animals using stuffed shapes and wire armature, embellishing with precious fabrics and using pre-loved household detritus and trinkets to add the glint of an eye or a flash of a claw. She spoke with Fibre Arts Take Two about her career and work.

“I’m a magpie!” says Bryony. “I like gathering treasures and putting them together and playing with them. But I began my career by studying jewellery making and bashing metal. I became a jeweller and had a fantastic five or six years working in the industry, learning so much, building my confidence, and even travelling to India on buying trips. It was fab, but I learned I didn’t want to spend my life selling jewellery to people.”

Bryony started making animals. “I felt like I was supposed to put more of myself into that, and it allowed me to embrace the creativity and was the right thing for me. It also coincided with wanting to start my family and open a business… working with textiles made sense on a practical level. However, I use many of my metalwork techniques in what I do now.” 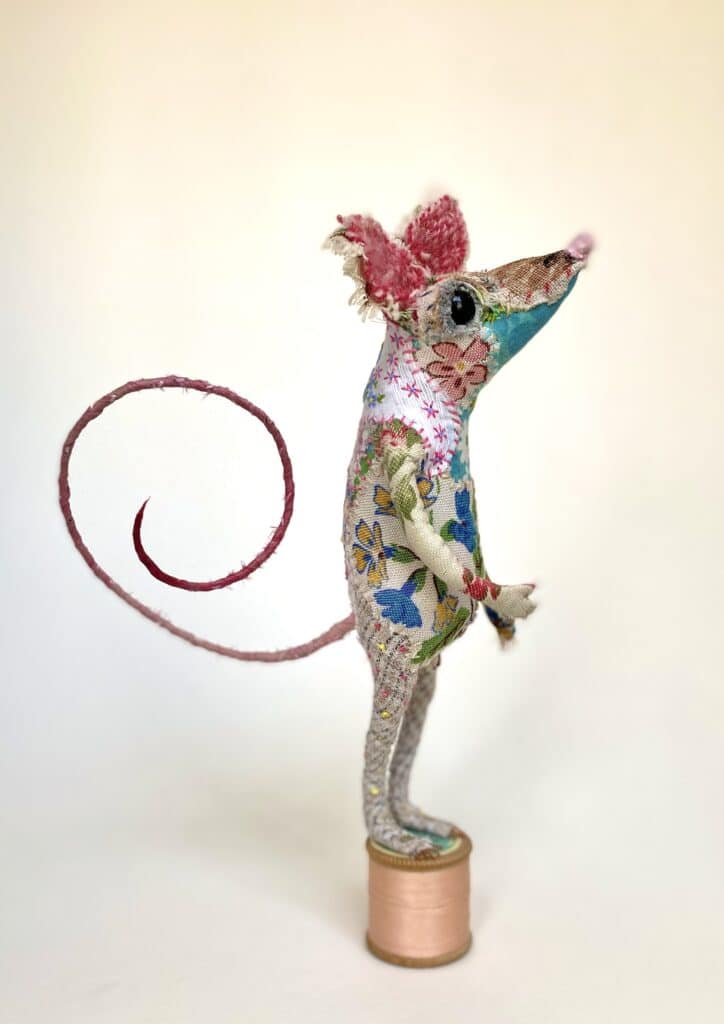 Fans of Bryony may have already heard the Flossie story and how it led her to create textile animals.

“My friend and I have made a fabric installation of beach balls in a water site in Folkston. We made about 50 or 60 fabric beach balls and stuffed them all in this waterside lift, which was really good fun.”

“Off the back of that, we were asked to make something for a beach hut. So we decided to make a life-sized fabric donkey. I think we had about four days so we just pulled all the materials we could find from our home, made a frame out of wooden logs from the woodpile, and leftovers from my partner, a builder and carpenter.”

“We made this frame. We wrapped it in old winter bedspreads and old sheets. And then we put patchwork on top of it with old clothes and fabrics we had gathered and just kept going until this animal emerged, which was wonderful.”

“And Flossie was born. Even the dog started barking when she came to life. And she just totally won my heart. She appeared in this haze of four nights and four days of extreme stitching and a little red wine. She came into being, and I just adored her and I wanted to keep going and making animals because I thought I had just found some real magic in that process.”

Flossie has since been dragged across the UK and now ‘lives’ at Bryony’s mother’s studio, often outside to entice people inside. “She has been loved in many ways by many people and now needs a little fixing up,” Bryony explains. “We never tried to sell her, and she has been everybody’s sculpture.” 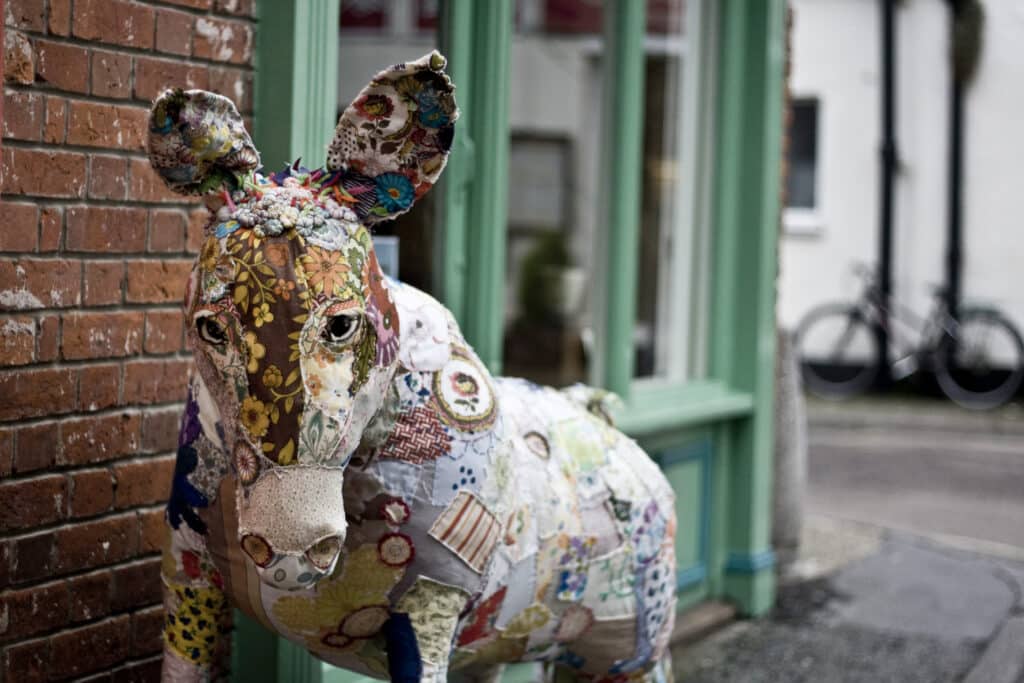 “With every sculpture, I get to the point where I can ‘see’ them,” explains Bryony. “It’s usually when I put the eyes in, which brings a realism. But that isn’t always necessarily the point where I feel engaged with the sculpture as a soul-bearing entity. Many of my mother and child pieces didn’t come alive until I realised a child was needed. It was like they were missing something or waiting for something.”

“You get to a point when you’re just trying to help them realise who they want to become. It sounds completely bananas, but when you spend most of your life staring at these cloth creatures, you want to find a personality. I want them to be able to trigger a response in the audience or find a way for people to be able to relate to them in some way. And to do that, you need to find an aspect of humanity or emotionality.”

Not every work of Bryony’s is passed to a new owner immediately. “I tend to keep some of them around until people get in touch and ask because some are waiting to find their perfect person, and I have quite a few stories of people uniting with the artwork and me finally understanding why I have kept it around. It goes beyond what I intended because some were waiting for the right person.” 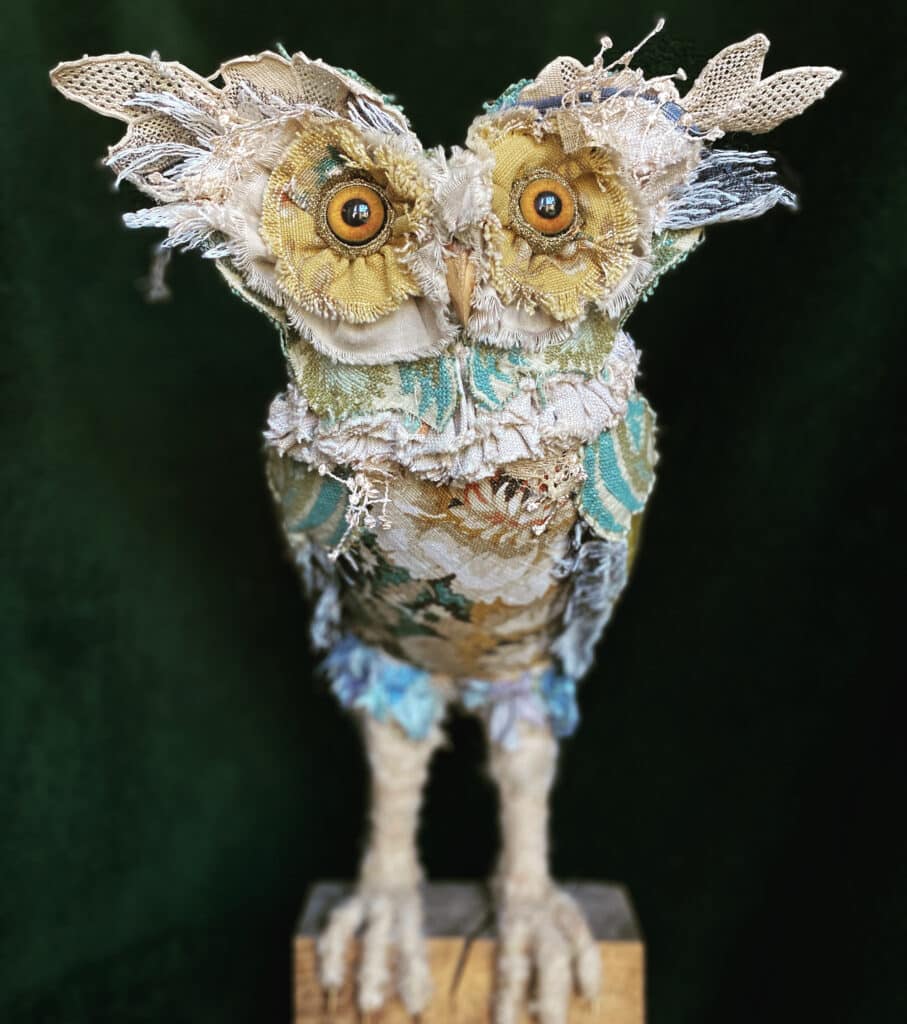 Bryony Rose Jennings is a textile sculptor living on the beautiful Hampshire coast in England, working from home juggling creature creation with the mothering of her two young sons.

Growing up in an artistic family. Bryony has been creative her entire life. Collecting and hoarding vintage fabrics and embellishments is part of Bryony’s nature. It is from this feathered nest of material that she creates her textile menagerie, creatures that carry a childhood’s worth of inspiration and imaginings. Manipulating fabric into form, Bryony’s creative process is slow and considered, allowing a personality to develop organically as she wraps, folds, stitches and stuffs, sewing a little soul and some magic into every creature she creates.

Her popular workshops sell out fast, with students being offered the freedom to create their own whimsical creatures under the expert guidance of Bryony. 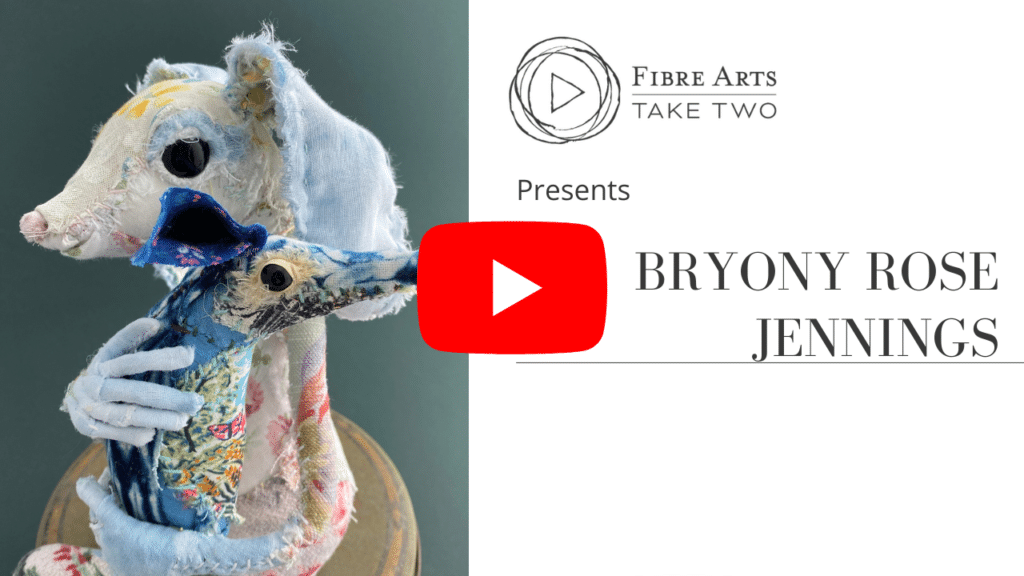