Ava Roth: In Collaboration With Bees

Ava Roth is an encaustic painter, embroider, and mixed media artist. Fibre Arts take Two was privileged to talk to Ava about her collaboration with bees.

Ava’s Friday Feature Artist Interview can be found at the bottom of this page.

Ava Roth is a Toronto-based encaustic painter, embroider, and mixed media artist, fundamentally guided and inspired by organic and local materials. She relies on Canadian beeswax, foraged wood, birch bark foliage, and horsehair to create her works. As an encaustic artist, the common thread throughout Ava’s beautiful mixed-media artwork has been Canadian beeswax for over a decade.

She is currently absorbed in an interspecies art collaboration with local honeybees. This project, like all of Ava’s work, explores the boundaries where humans collide with the natural environment and imagine a more beautiful outcome for our encounter.

Fibre Arts Take Two touched base with Ava to learn about her art and collaborations.

The journey to beeswax

Ava says that her journey to beeswax was not a direct one. “As a young person, I was really interested in making as many things as I could, and I didn’t really have a clear direction. I didn’t have a clear sense of what it was that I wanted to make. There’s this idea that an artist is supposed to know their expression and what they’re trying to express. There’s this irrepressible need to get something outside from inside of you. And that’s the definition of an artist we tend to have.”

For Ava, the experience was very different.

“My experience was wanting to make stuff but not really knowing what I wanted to make. And that was really confusing for a long time. I tried all kinds of strange things, making me feel like I wasn’t an artist because I didn’t know what that thing was that I was.”

Beeswax turned out to be part of what helped Ava find her direction, “I think it wasn’t just the beeswax; it was probably just the moment in my life where I had been doing things for long enough that everything that I was doing started to take some shape. But at that time, I encountered beeswax, and it was so beautiful and connected to so many things that I loved. I think you have to do something for a long time before you know what you’re doing, and beeswax was my way of figuring that out.” 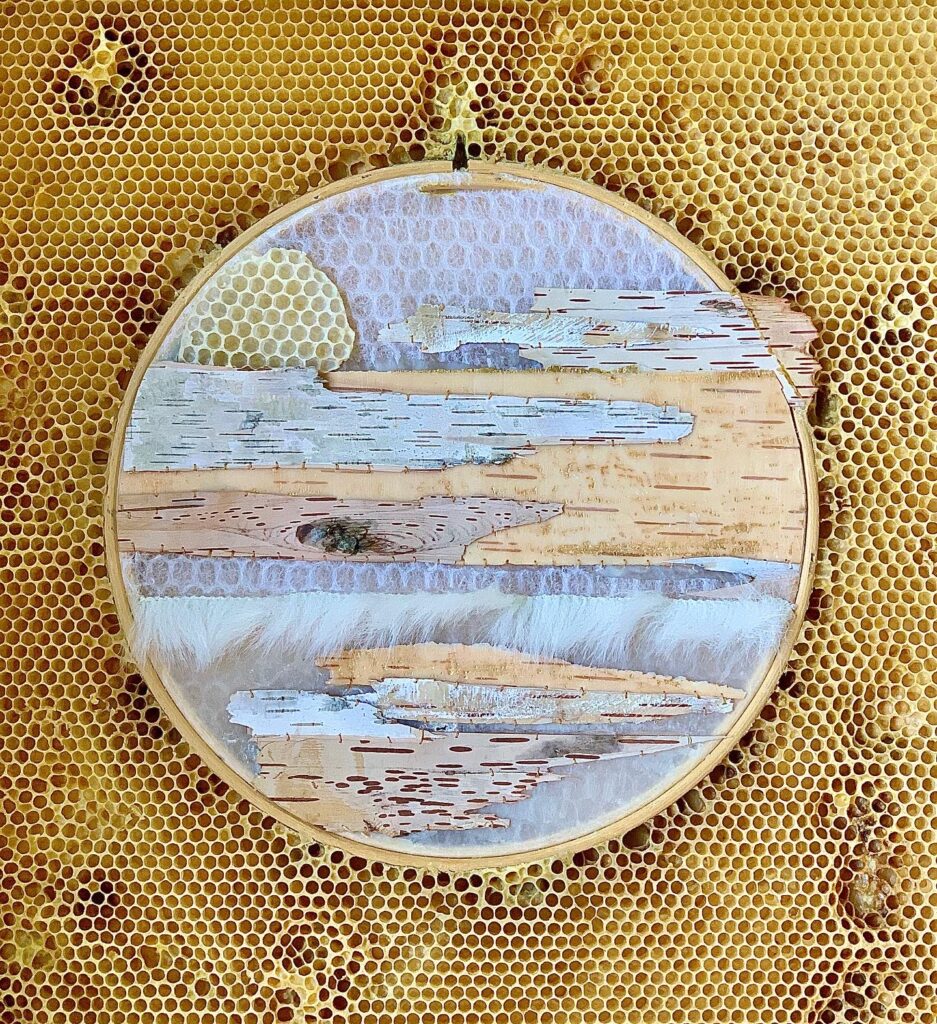 Ava’s work has included a unique interspecies collaboration with bees. “I started learning about bees, and then the more I learned, the more that informed my work. Then I started using little bits of comb, and then I made a relationship with a beekeeper.”

These incremental steps led Ava to an epiphany, “At some point, I was like, ‘wait a minute, why am I doing all of this work? Taking everything out? Why don’t we flip it around, and I can put some stuff in.’”

Ava takes her interactions with the bees very seriously as a collaboration, “I’m interested in the health and the wellbeing of the bees. I haven’t wanted to have this top-down approach of directing the bees of what it is that we’re going to make. I wanted to go really slowly and experiment with what the possibilities are on a very small scale by just putting something in, seeing what the response is, taking it out, thinking about, ‘what if we did this a little bit differently, and then develop something together based on what it is that they’re doing?’ It’s really like it’s a conversation with the bees more than anything.”

Working with bees does have its challenges, especially as far north as Canada, “The bees’ season is so relatively short here. My sister in Southern California has bees all year, but it’s very short where I am. At some level, that’s frustrating that I can only work on this project for a few months of the year. But on another level, it’s been really nice because enough years have passed that there’s this really seasonal aspect to my work. It’s not by design. It’s not that I wanted to work seasonally. But I have to because I’m plugged into their schedule.”

Despite the enforced seasonal nature of her work with bees, Shona finds beeswax to be an excellent medium to work with, “You can repair it really easily because you can take it out and put it back in the hive for a day or two.” She also finds beeswax to be a medium that transcends visual art, “Paintings that I have from years ago, you can still go right up to them, and you can touch them and smell them, and it’s really a multi-sensory experience.” 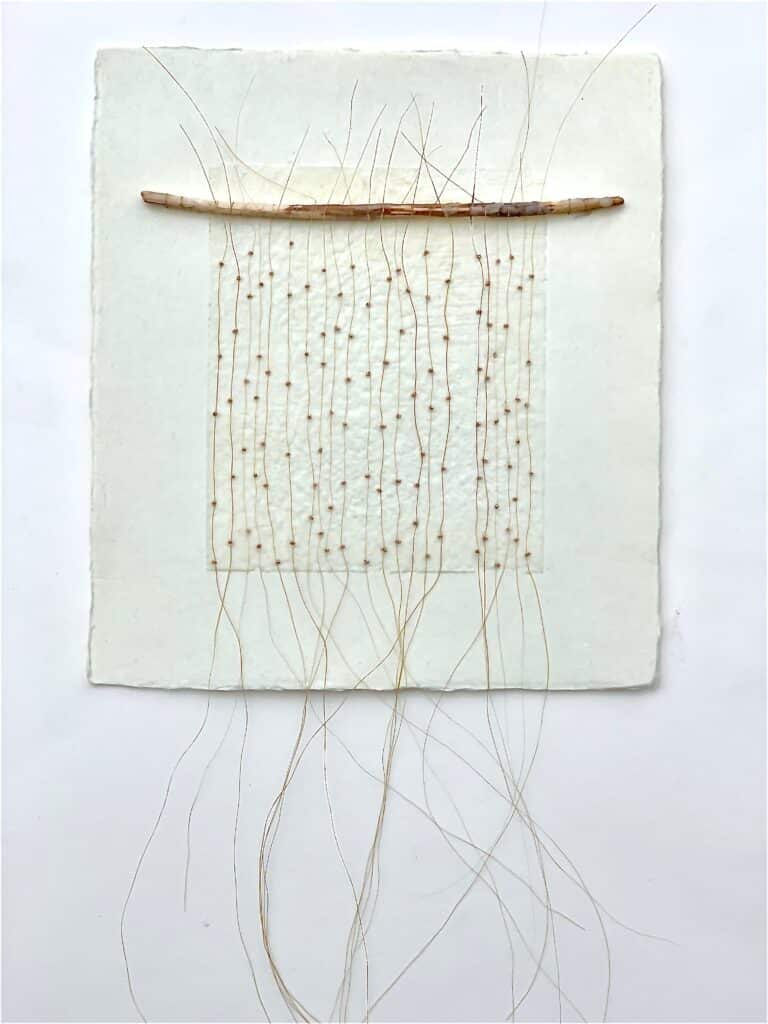 Lately, Ava has been experimenting with paper, “I’ve really fallen in love with this particular Japanese paper. I’ve really been enjoying working on paper. And it feels totally different. It feels like a new direction. But also like the same as what I’ve been doing somehow just like a new phase. It’s a lot more delicate. And I’m really enjoying that delicacy. Mixed with the beeswax it’s a beautiful combination and I love that I can sew through it. After spending several years just embedding the thread, I’m just pulling it through it now. It’s very satisfying.”

Permission not to know

“It seems obvious, but it wasn’t to me. I spent years before I understood that I didn’t have to know what I was trying to express before I started making something. You figure that out by doing it for a long time, and then it eventually drops in.” 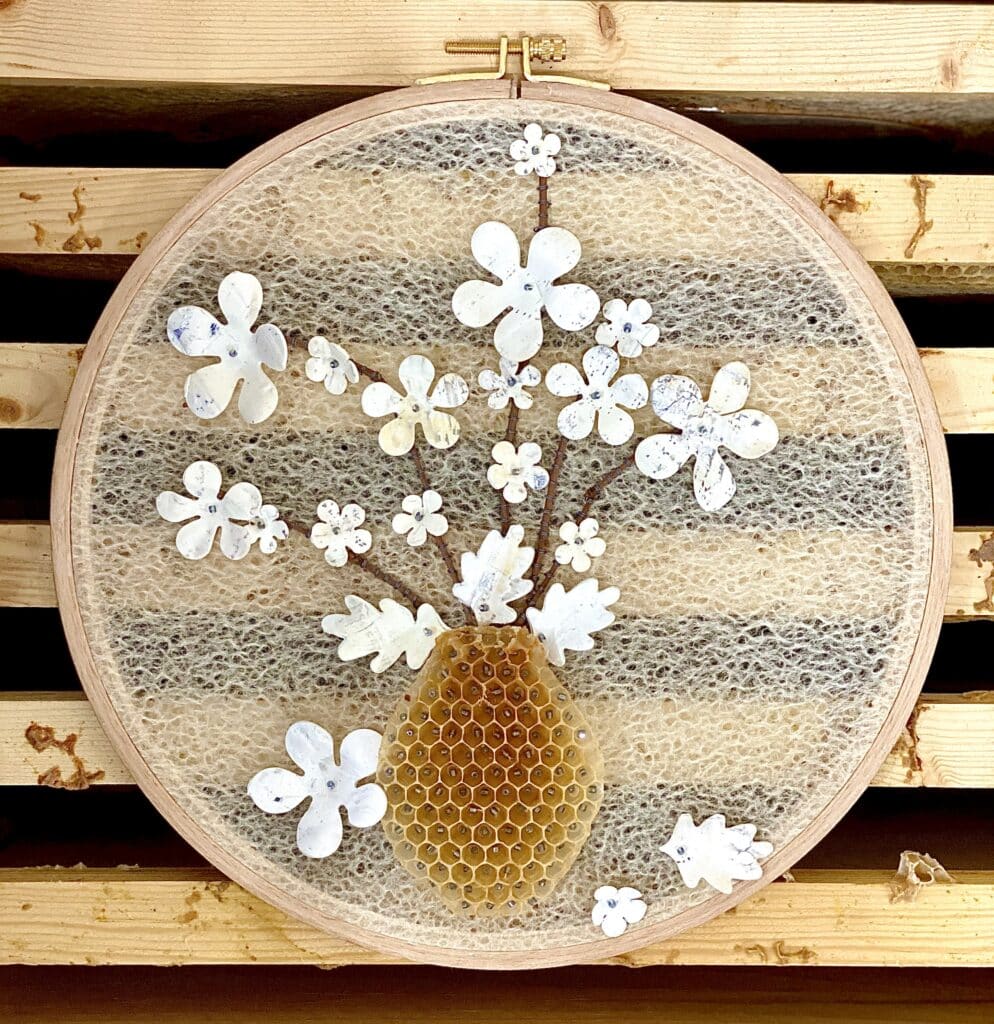 Ava Roth is a Toronto-based encaustic painter, embroiderer and mixed-media artist. She has been a maker her whole life but has spent the past several years working almost exclusively with beeswax. She is fundamentally guided and inspired by the organic and local materials that she relies on, such as Canadian beeswax, foraged wood, birch bark, foliage and horsehair.

She is currently working on an inter-species collaboration with local honey bees. This work begins in her studio with the creation of encaustic collages suspended in embroidery hoops. The hoops are then fixed to custom-made Langstroth hive frames and placed inside honeybee hives where thousands of bees embed the work in the comb. Like all her work, this project explores the boundaries of where humans collide with the natural environment and imagines a more beautiful outcome of our encounter.

She is represented by Wallspace Gallery in Ottawa. In addition to exhibiting in solo and group shows, her work has been featured in many online and print magazines. Ava’s pieces have been acquired by private collectors throughout Canada and internationally. 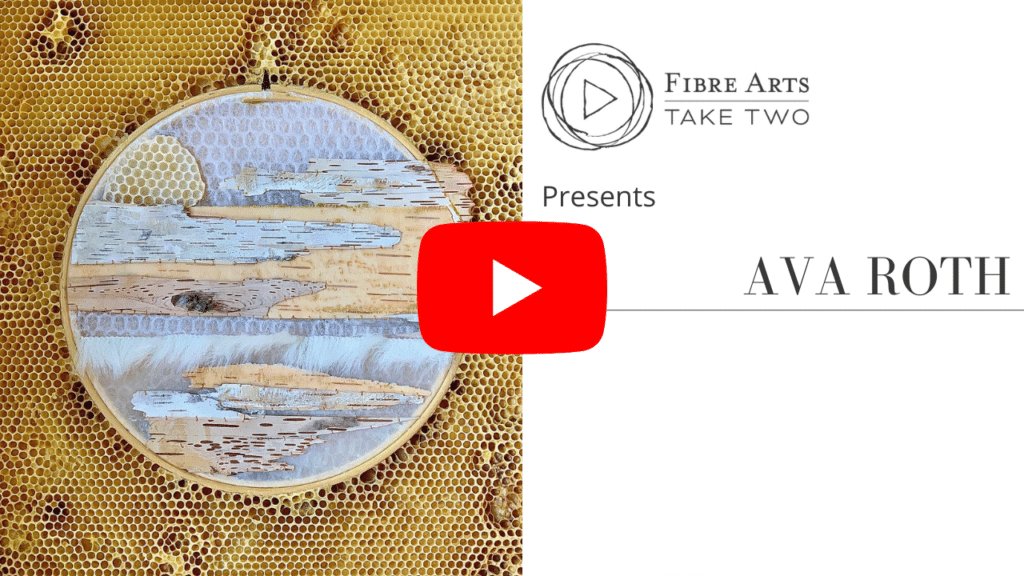