Hungarian textile artists Eszter Bornemisza explains her transition from mathematics to art and the importance of ‘doing’.

Eszter’s Friday Feature Artist Interview can be found at the bottom of this page.

Eszter Bornemisza is a fibre artist living in Budapest, Hungary, working with recycled paper, textiles, and other found soft materials. Trained and having worked as a mathematician, she began the transition to textile arts in the mid-90s. After making art quilts for more than 10 years, her interest has turned to creating transparent wallhanging objects and installations using ripped, overprinted newspaper with additional printing, dyeing and painting elements.

The choice of the newspaper as a basic material plays a central role in Eszter’s recent work as it provides further visual experiences by the femoral character. It also represents the overwhelming avalanche of fake and relevant news we have to distinguish day by day. Eszter’s work addresses issues related to past and present cultures of place. Fibre Arts Take Two had the privilege of hearing from Eszter herself and gaining further insights into her life and what it takes to become a world-renowned fibre artist. 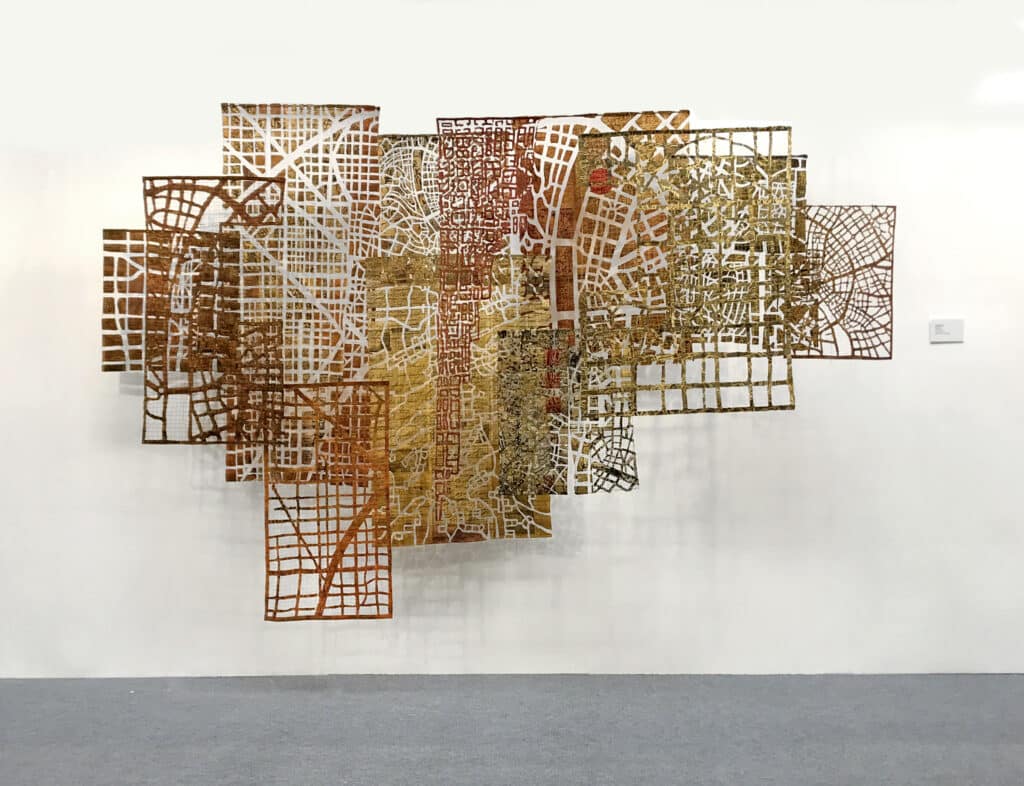 Growing up in a soviet country was difficult for Eszter.

“The theory was that everyone should be equal. But it seemed to me in my childhood that rather we should be uniform, we should think uniformly, we should talk uniformly and dress uniformly. And I didn’t really like it.”

She quickly learned though, that it was safest to stay quiet and play along with the system. “After a time I found myself talking the minimum, but it was very unavoidable that I talked about things at school. So, I thought that there are things which are safe and sure like mathematics that is proven and it’s evident.”

Maths became a more solid feature in Eszter’s life when she entered a competition to get out of a history test. “It was a nationwide contest held once a year. And actually, everyone could enter who was interested. And I signed up for it.”

After surprising success in the competition she pursued mathematics in higher education, “This thing led me to study mathematics at the university, but when I was there, I found that it was not really my cup of tea. But at that time, you couldn’t change subjects at the university.” Being stuck with maths, Eszter went on to a career as a statistical mathematician.

Eventually, Eszter’s artistic needs got the better of her, and she made the switch from mathematics to textile art. “I got a sewing machine from my father when I was 13, and I didn’t really know what to do with it. But I found an old chest with my grandmother’s old cloth things in it at the time, and I realised that I could fit them for myself.”

With the poor selection of clothes available in soviet Hungary, being able to make her own clothes was exciting for Eszter. “I could change my grandmother’s dresses to fit myself, and that’s how I started really stitching, and then I got a little bit more encouraged and then saw my own dresses. And then later, I’ve got a family and three children, so I was sewing for my family.”

Eszter soon turned her skills in textiles into her new career. “I applied for a juried exhibition in Holland, and I got in, and I got The Best of Show prize plus the best design prize. So first, it gave a big kick off for me. And second, I realised that from a faraway country in Europe, the way I could link to textile artists could be to apply for exhibitions. After a while, I became courageous enough to try to apply for solo exhibitions, and when I got them, it was like an avalanche slowly growing.” 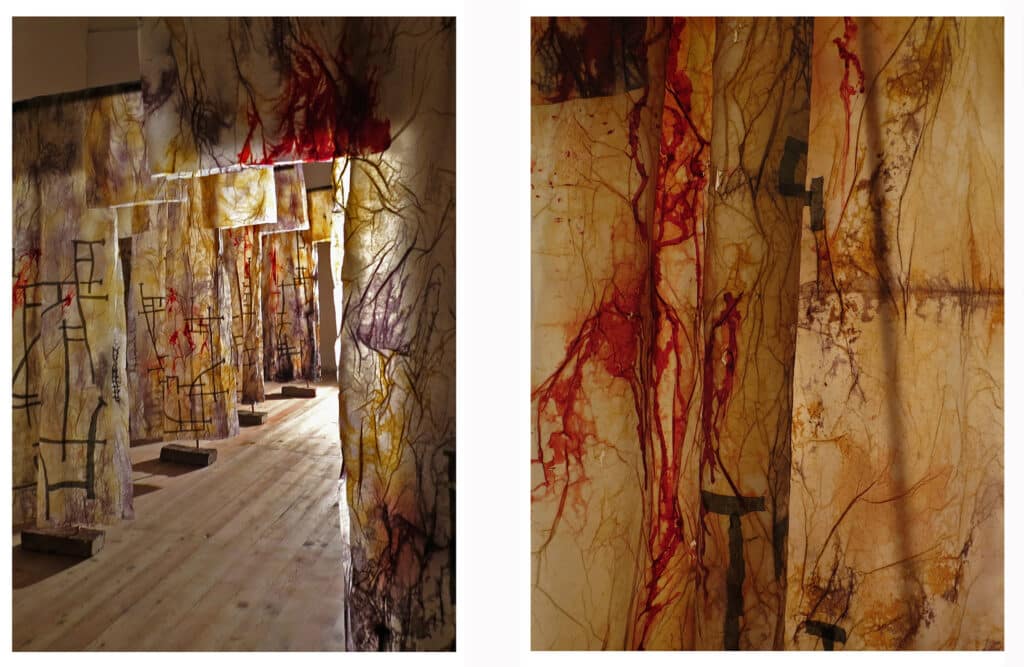 Eszter enjoys using paper in much of her work. She started with an interest in newspapers. “I love to work with newspapers because of its ephemeral character because the news that is in it is somehow not relevant at the moment when you read it, it is the past, but also, they have very significant traces of the near history. When I’m stitching with them, I love to read the headlines and find them so ridiculous that we had those little problems at that time, and what are they compared to nowadays?”

More recently, Eszter has started creating her own paper. “I blended up recycled newspaper, and I made my own pulp and got some books and read on the internet how to cast paper and make my own frame.” This was too simple for Eszter, though, “I thought, Okay, this is done, I can do that, this is boring, I should do something different. So I harvested Russian sage on the lakeside.”

She then added full leaves; “I wanted to have a rich texture, long fibres, and lots of them so I didn’t cut them up at all but cook them as it was prescribed.”

“Even if you don’t feel that you have a gorgeous idea that you want to try, just do exercises and work with things that you fell in love with years before. Go to the studio and do something, and usually it helps.” 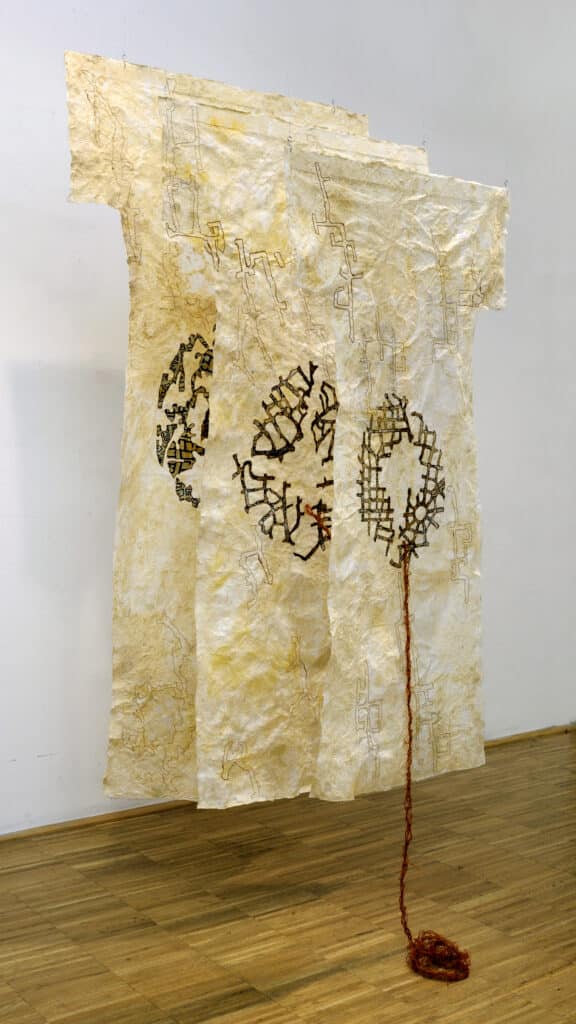 With experimentation and research being her primary tools for developing ideas. Labyrinths, like maps and many dead-end streets, have been a visual metaphor for a journey to find her own identity in the art field. Eszter’s work addresses issues related to past and present cultures that have placed the layers of existence. 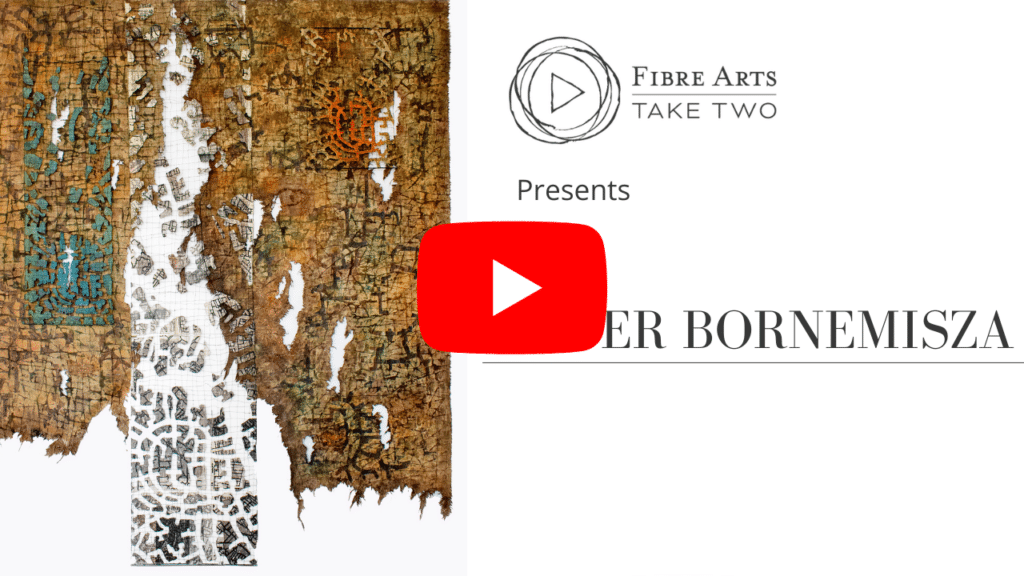