Ann Goddard’s Friday Feature Artist Interview can be found at the bottom of this page.

Edward de Bono said, “Creativity involves breaking out of established patterns in order to look at things in a different way.”

Concrete, wood, lead and bark are all materials used by textile artist Ann Goddard. Since she learned how to embroider, the assumptions of what a textile practice can be have changed radically. As she distresses fabrics by burning, waxing, rubbing, tearing, scratching, piercing and fraying, Ann pushes the boundaries of what we might consider the classic properties of textiles, referring to her work as constructions rather than sculptures.

This term describes exactly what Ann does; she builds up forms and surfaces by putting parts together. Ann’s work sits between fine art and craft, exhibiting all over the world with numerous shows across the UK in Europe. 2022 saw the release of her book Mixed Media Textile Art in Three Dimensions.

While textile tradition may have been the starting point, Ann is no longer concerned with categorisation but is motivated by the visual excitement of mixing diverse materials, and the challenge of finding new ways to join them.

Join Fibre Arts Take Two as we take a journey with Ann through her mixed media art.

Although Ann had always enjoyed art, and especially mixing materials, it was her masters that truly cemented her love of mixed media, “I initially started textiles doing a City and Guilds course,” she says, “which changed my life, and it was through that, that I submitted work to the Charles Henry Foyle Trust. It was actually a monetary award, which allowed me to pay to do a master’s and that completely changed my way of thinking. Previously, I’d loved mixing the different materials but more just enjoying the juxtaposition. I got excited when I mixed them together, and I really liked the aesthetic. Then, when I did the masters, it made me think more about how to use materials as signifying elements where you could choose your materials and their associations to whatever the idea was you’re exploring. And that’s what I’ve been doing since.” 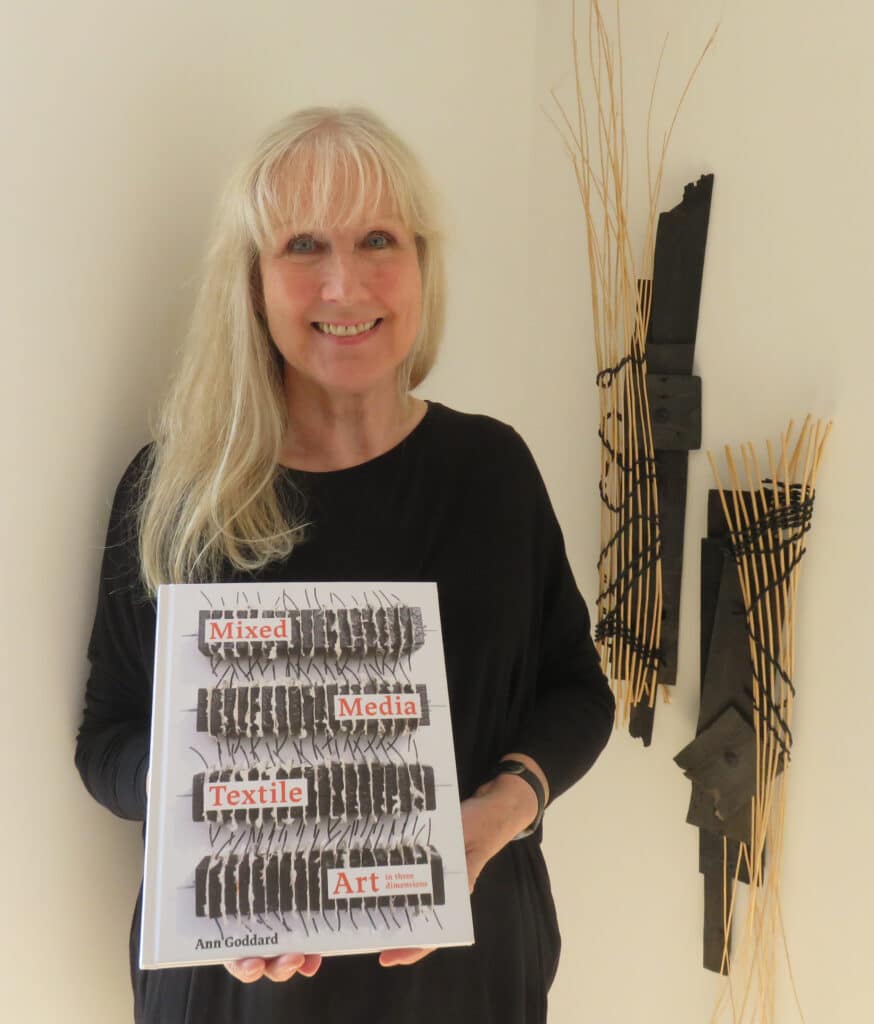 Ann chooses her materials for what they represent, “I choose bark cloth, because it refers to trees,” she explains,  “Other people may not get that reference because a lot of people don’t know what bark cloth is, but it’s actually made from the inside of trees. So I use that to try and suggest the idea of trees.”

Her artistic teachers taught her to think even more deeply; beyond materials to process, “I learned to use processes as well as signifying elements,” she says, “So if I burn something, it’s usually because I want to give a connotation of destruction, vulnerability, that sort of thing. So it did change my approach, although I think my aesthetic, more or less, stays the same.”

Ann also discovered a new way of looking at art, “I discovered that fine art was really all about ideas,” she says, “I don’t like to be categorised. It’s very difficult to categorise what I do because I realised that I am on the margin of textile practice. And although I mostly include textile elements, I like to do things with other materials as well. It’s all part of the story really to try and create the narrative.

Ann told Fibre Arts Take Two more about her award-winning piece, “Most of my work is environmental,” says Ann. “I’m really concerned with climate change, mass extinction and things like that and this piece was based on reading an article that was suggesting that 40% of insects could possibly be extinct within about ten years. And most of those insects would be pollinators, bees and butterflies.”

Ann decided on butterflies as her focus and set about creating pupa-like shapes, “I wanted to represent how not all of them would survive,” she says, “so the black ones were actually aimed at suggesting their demise. The bark cloth ones, the normal orangey-coloured ones, were the ones that were surviving, and the black ones represent those that would be lost.”

Creating the black pupa proved to be a challenge, “I don’t normally dye materials,” says Ann, “and I found it difficult to actually colour the barkcloth. I’d been burning the other orange bits because that was to indicate, would they survive, are they being destroyed? I thought I could try burning the barkcloth, But I couldn’t do it all black, all burned, because it would just crumble together, so I dyed them and not being used to dying, it was a bit of a disaster because they all shrivelled up. It took a lot of manipulation to pull them into shape. I thought that was better for the narrative because I didn’t get the more uniform l shape. Some of them were shrunk really small and others were sort of funny. It’s fed into the narrative.” 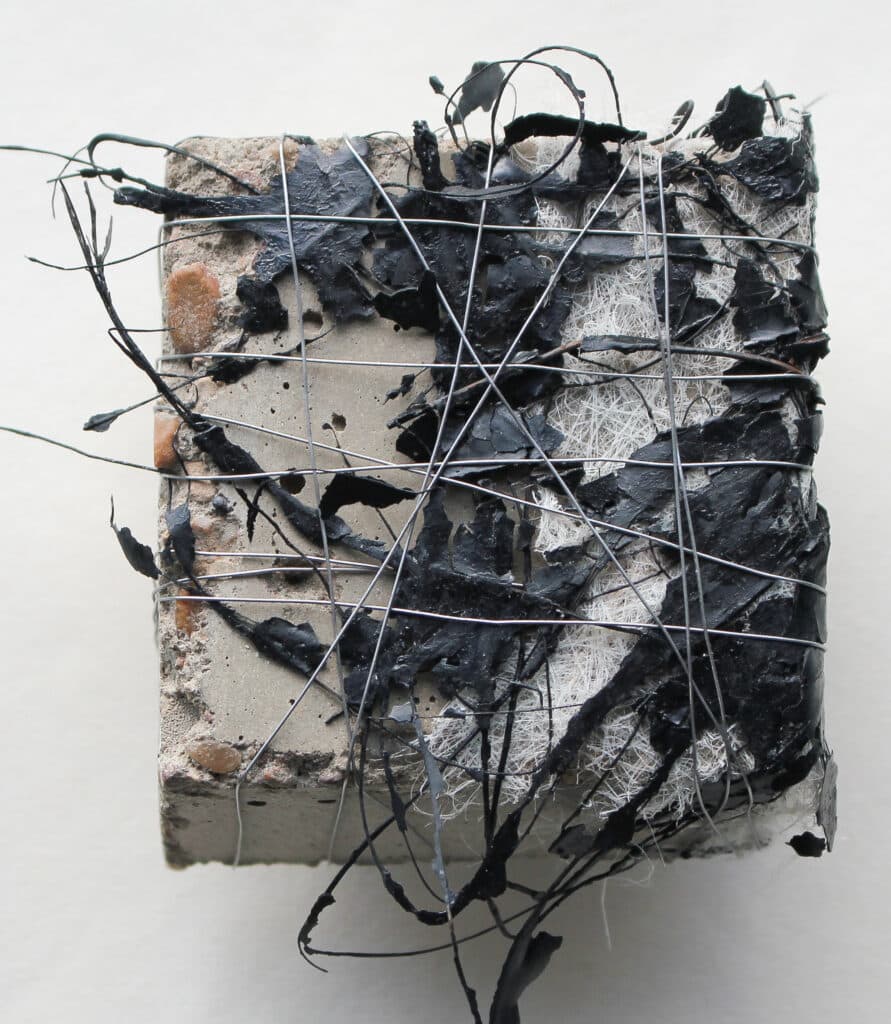 Penned In was a piece Ann did as part of her Boundaries exhibition. Ann explained more, “I Initially started Boundaries because I could tell I was on the boundary of textile practice,” she says, “and I became very aware of the hierarchies in the art world and that textiles is quite a long way down. Because a lot of women do it, it’s not so highly regarded as work that men do. Boundaries were restrictive for textile people actually trying to exhibit in the fine art exhibition, basically, like somewhere like the Tate, unless you would come from a fine art background.”

Penned In was Ann’s statement on the boundaries that textile artists have to break, “The work was basically trying to show this because it’s made of felted silk paper and layers of it are trapped between either burnt wood and slate sticks and I put them on rods. with wingnuts to sort of fasten them tight, to suggest that textiles are neglected.”

Ann now has a book out, Mixed Media Textile Art in Three Dimensions. “I just hope it can be of use to some people,” she says, “I know a lot of textile people think, you know, what’s this all to do with? But the book is for anybody who’s interested in maybe trying out a different approach.

I invited some other artists who work with mixed media into the book, and they give a different voice. They provided statements as to how they work and the materials they work with, and why they do it. I think it helps to enrich the book to have other people’s points of view because, obviously, I only do what I do. I’m not saying you must do it this way. Just experiment for yourself.” 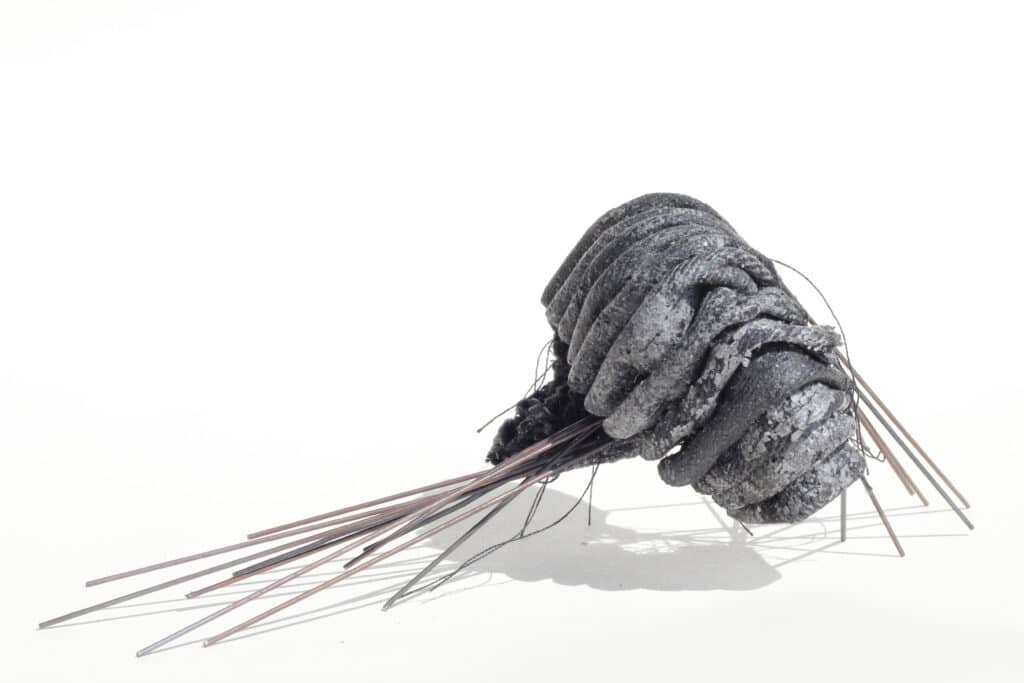 Ann’s practice straddles the boundary between fine arts and crafts and has evolved from her background studying embroidery, ceramics, and textiles within a Fine Art context.

A life-long interest in nature led her to research local and global ecological issues. Ann’s ongoing body of work explores the impact of human activity on biodiversity, the destruction of habitats and the extinction of species. The focus is on small endangered lifeforms and the vulnerability and fragility of nature. A consequence of this work has been the development of small format artworks that explore the possibilities of concentrating ideas into a miniature size.

Working directly with materials, Ann juxtaposes a diverse range of contrasting materials…fragile with hard, natural with man-made. The techniques used are as varied as her materials. Her preferred method of creating form is through construction. Rather than direct representation, she aims to utilise the intrinsic qualities of materials and processes to evoke associations and carry the essence of the theme. 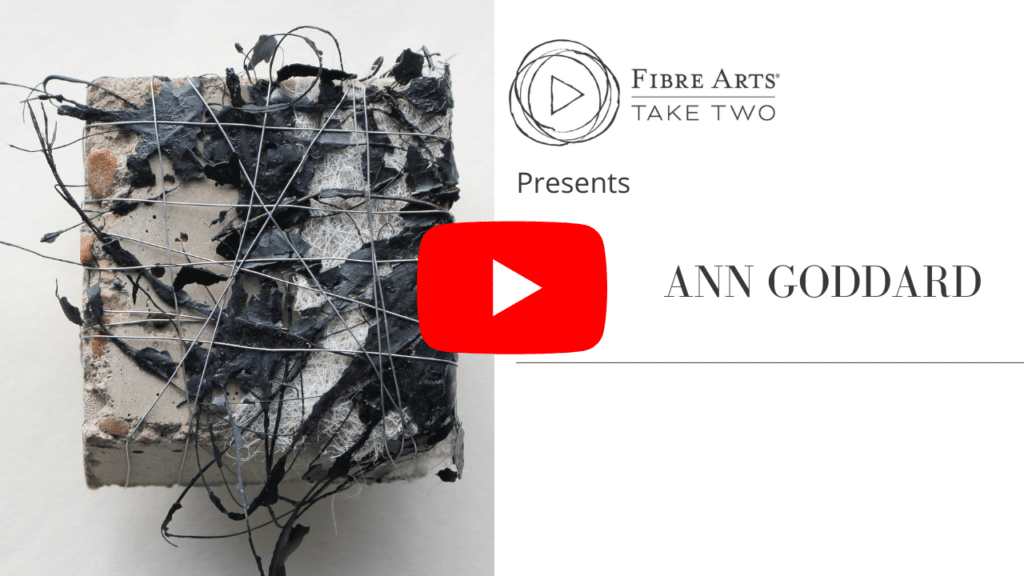 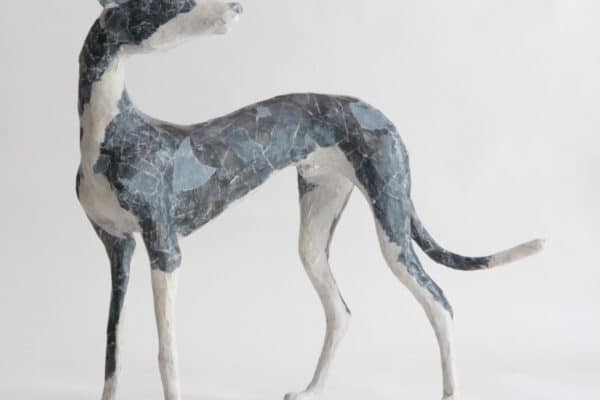