Drawing has been integral to Jody Graham’s life since she was a child. Fibre Arts Take Two talked to Jody about her mark-making work and how it has evolved.

Jody’s Friday Feature Artist Interview can be found at the bottom of this page.

Drawing is Jody Graham’s go-to. It’s how she learns about people, places and things. The recurring themes in Jody’s work have centred on the broken, the displaced and the forgotten.

Moving beyond pencil and paper, Jody often draws with utensils and tools she has crafted from a place or an event, such as using charcoal collected from the black summer fires, which she used to depict flying embers and birds escaping the flames.

This artist’s compulsion to collect found material, to rescue things and restore life and purpose can be seen in her use of innovative drawing tools. Jody has had many solo exhibitions, been a finalist in many major art prizes, and was the winner of the 2022 Adelaide Perry prize for drawing. Fibre Arts Take Two enjoyed talking to Jody Graham and learning more about what makes her tick.

Jody’s love of drawing is long-standing, “It’s always been there since childhood,” she says, “When you’re younger, and people say, ‘Oh, you’re a good drawer’, you feel encouraged to keep drawing, and I didn’t have that in the choir, for example, so that encouraged me. I liked spending hours just drawing, and I still do that. It’s how I think. It’s how I discover about the world and myself.”

Fibre Arts Take Two asked Jody if she believes it is something you can learn, “I do,” Jody answered, “I noticed when I haven’t drawn for a while, I’m rusty. And then I draw more, and I feel better. When I teach people, I’ve seen them grow and get better. So yes, I think you can.” 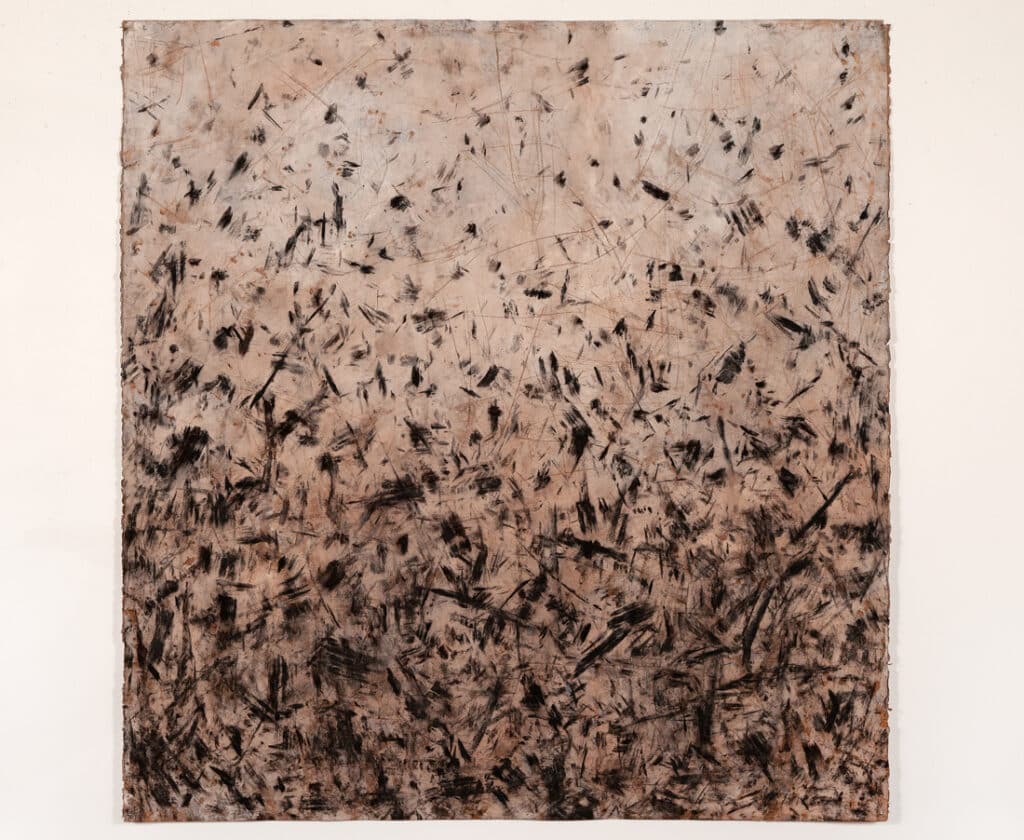 After interviewing people about Australia’s dreadful bushfires in 2019 and 2020, Jody made a suite of work about fire management. One of the works was called Cinder Dance.

“I wanted to get more involved with letting the charcoal make the mark,” says Jody about the creation of Cinder Dance, “I decided one day, ‘I think I might put it in the dam and see what happens’, and picked up a rock on the side of the dam and just started drawing into the paper. And it’s just such a beautiful experience. Underwater, holding a rock drawing into paper. I can’t necessarily see the marks I’m making, but I know it’s scratching into the paper, and it feels like I’m really connected to the drawing, the environment, and letting go. And then I pull it out and let it dry and what happens with those scratches is the charcoal gets into the grooves, and there’s sap on that as well, so it becomes impregnated. The work gets a depth about it.”

A significant part of Jody’s artistic journey involved a residency in Toulouse, France, “When I arrived at Toulouse,” Jody says, “I was so exhausted because it’s a big flight and lots of layovers, but the architecture just blew my mind immediately. The bridges and the arches and the cobblestones, and so I was overwhelmed. How I was going to do a full sheet a day? I just made sure I kept drawing every day. It took a few days to settle down, and then when I went to that empty room, I don’t think I was so overwhelmed.”

Doing a residency overseas proved to be a very different experience to residency in Australia, “In Australia, I’m here,” Jody says, “I don’t have to adjust to time zones. Whereas in France, I was like other people I’ve seen in residencies that are from overseas; it takes them a while to find their feet. I had to get a sense of the place and what was going to attract me. So I waited to look for an event or an incident and let it wash over me for a while.”

One of the problems that always hits a bowerbird like Jody is the accumulation of bits and pieces, “I overdid it,” says Jody, “I found an art shop in Toulouse, which was amazing. I took too much. And I was with people there that had been on overseas residencies, and they knew how to pack light. Just keep it simple because you’ve got to send it all home. I didn’t do that. I got straight into mixed media, and I had to resist collecting a lot of things.”

In 2021, Jody performed an artistic collaborative duet with musician Mark Cauvin. Cauvin provided musical accompaniment on the double bass in response to Jody’s mark-making. “Performing was new for me,” says Jody, “I think I’ve done it once before with a few other artists and maybe when I was younger. We practised for a week, and we had two performances. I learned a lot. I actually was surprised how much I liked it. When I do stuff in my studio, it’s only me, but when you present it in front of an audience, it becomes something else.”

Collaborating was an enlightening experience for Jody. “We were learning about each other,” she says, “I would make a mark and think ‘, Oh, I wonder what sound is his equivalent?’ And I think those performances, I ended up ripping the paper, so we push each other.”

Jody has some words of wisdom about the health risk of working with charcoal, “I was actually thinking of trying to get away from it for that reason,” she says, “because there’s charcoal dust everywhere, which means it’s in my lungs. I know that is because it’s in my ears, it’s in my nose, sometimes my hair gets grey from it, black gets everywhere. I try and put the mask on all the time now. I would advise people to mask up when they work with charcoal.” 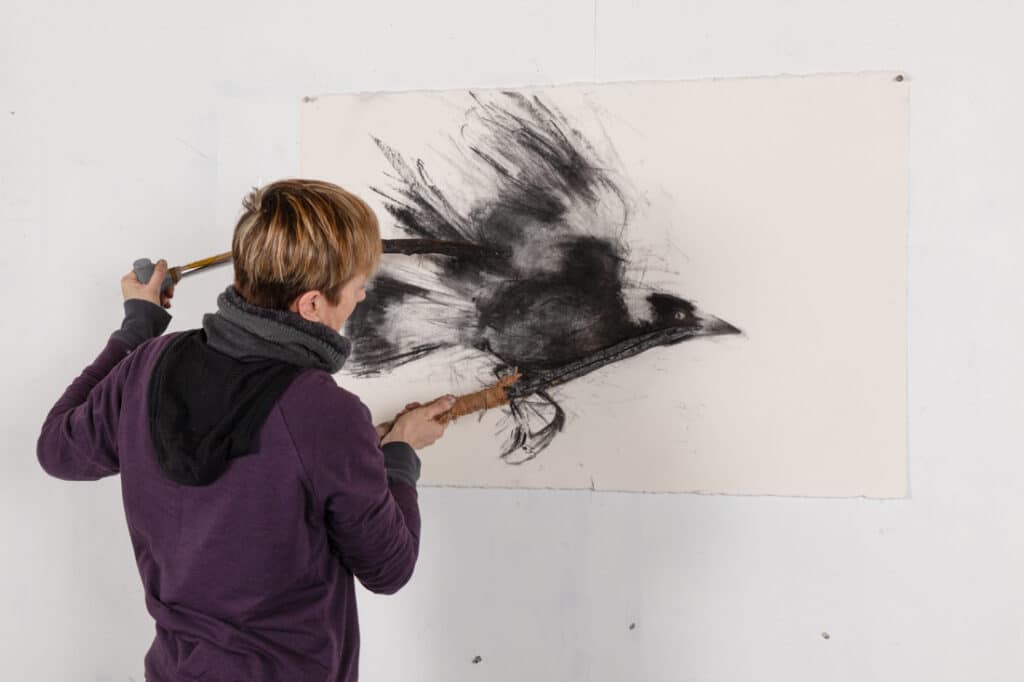 Jody Graham relentlessly explores new techniques and investigates contemporary drawing practice. To do this, she builds on and then moves beyond conventional drawing processes in search of new methods and tools that connect drawing with the fundamental need to make symbolic marks.

From the earliest days visiting scrap metal yards and her father’s factory in western Sydney – inspired by the action of machinery and the draftsmen’s tables where they drew designs for machinery by hand – the recurring themes in Jody’s work have centred on the broken, the displaced and the forgotten.

Whether expressed in drawing, sculpture, installation or performance, this speaks to her long-nurtured urge to rescue and restore, with the objective of recycling and repurposing materials and techniques.

Jody has had over ten solo exhibitions and frequently exhibits in important group exhibitions. She won the open Greenway Art Prize in 2017 (and the local prize again in 2020) and has been a finalist in many major art prizes, including the 66th Blake Prize, ‘Sculptures at Scenic World’ in Katoomba, and at the Muswellbrook, Paddington, and NSW Parliament’s Plein Air painting prizes.

Jody’s work is held in the Kedumba Collection of Australian Drawings, in Waverley and Blacktown City Council collections, at the Western Sydney Institute, in the Nepean Arts and Design Centre, and in private collections nationally and in the UK, USA, and New Zealand. 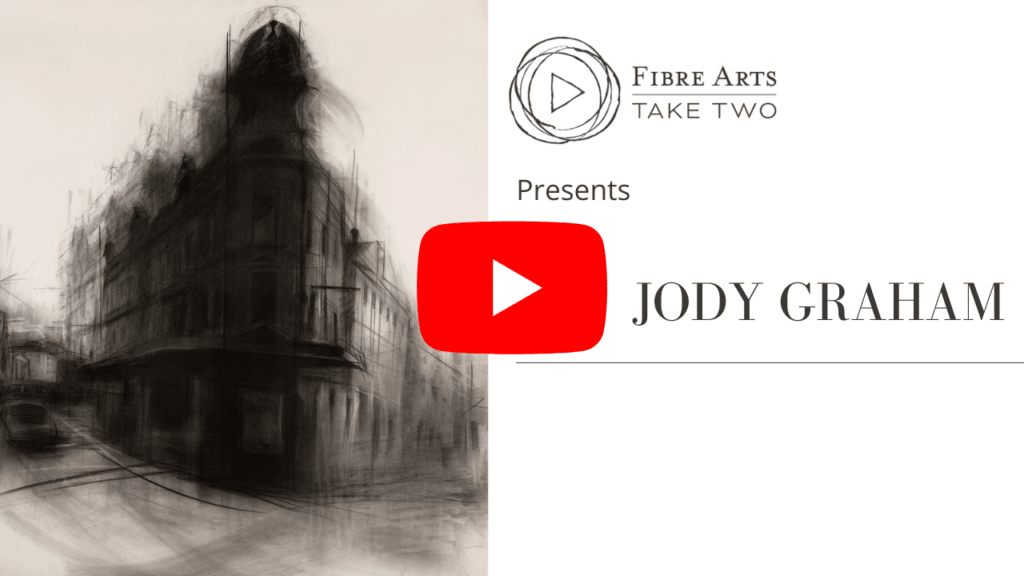