Put your hands to work: with Kristy Kún

Fibre Arts Take Two caught up with US-based textile artist Kristy Kún to talk about her incredible feltwork and her philosophy on art.

Kristy’s Friday Feature Artist Interview can be found at the bottom of this page.

After dedicating 13 years to building finely crafted furniture from reclaimed and historic wood, artist Kristy Kún turned her hand to something softer; wool. This transition fostered a quieter and gentle lifestyle, allowing Kristy time to work slowly through her own ideas, learn from others and develop a sustainable practice of her own in felt making.

Kristy can be found perching over her huge masterpieces on a workbench or working her felt in a pool or pond of water as only she knows how. Her work is mesmerizing, taking the viewer on a journey through many organic folds and forms that melt seamlessly throughout her pieces. Her past skills can be seen throughout her current pursuits in both obvious and discrete ways.

Fibre Arts Take Two spoke to Kristy about her love of felt making, her roots in woodworking and her artistic works. 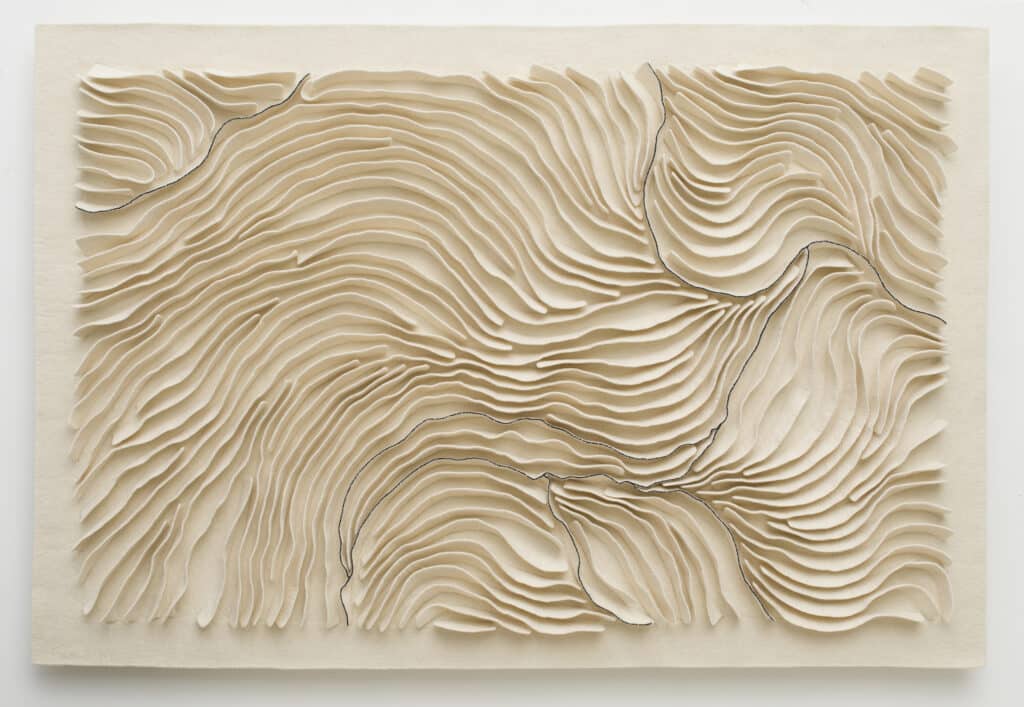 Kristy went to school for construction engineering for four years in Nebraska, where she grew up but always had an interest in woodworking. Eventually, she found a program in California, relocating to learn the craft.

Kristy began using reclaimed wood, including wine casks, redwood and timber from deconstructed buildings, to make furniture. This led to a 13-year career as a business owner, building traditionally crafted pieces, going to trade shows and learning how to manoeuvre sales/galleries etc.

After relocating to Oregon, Kristy had an opportunity to invest in a new business. Opulent Fibres was born, working with an Italian dye house and distributing for them. “I travelled a lot and hosted many workshops and had this incredible experience. Having instructors in my studio and being able to learn from them, even though I wasn’t in the classes, I was hosting the classes. And that’s how I learned felt making,” she explains.

Through selling fibre and yarn, Kristy discovered the sculptural potential of felt. “It opened up a whole new possibility in the material for me,” she says. “That’s when I decided to learn about felt making. I’m so tactile, and I really love the possibility of transformation into something totally new.”

“The process of felt making is warm water and gentle manipulation, but to create that dense textile can actually be very physical,” says Kristy, who makes a lot of her creations in a pond she built in her yard.

Kristy’s larger pieces take many days and weeks to create… so much so that she has stopped counting the hours involved with a project. “I don’t put so much attention on the amount of time that it takes; it’s more about saying, ‘Okay, this is this is the process, and it’s going to get there eventually’.”

Kristy enjoys collaborating with other people and mediums.

“I find that stepping outside your box, out of your own medium, and working with other materials or drawing techniques from other disciplines will enhance your work.

Part of it is learning to let go and see where it goes. And then emotionally detaching from it can also be a good thing to work on.”

When Kristy is commissioned to make a piece, she allows the design to evolve organically. “There is never a concrete idea of what the piece will be,” she says.

Kristy has also collaborated with her partner, Christian Burchard, combining his woodturning skills to create a beautiful series of one-of-a-kind felt sculptures inside Madrone shells, which you can see on her website. 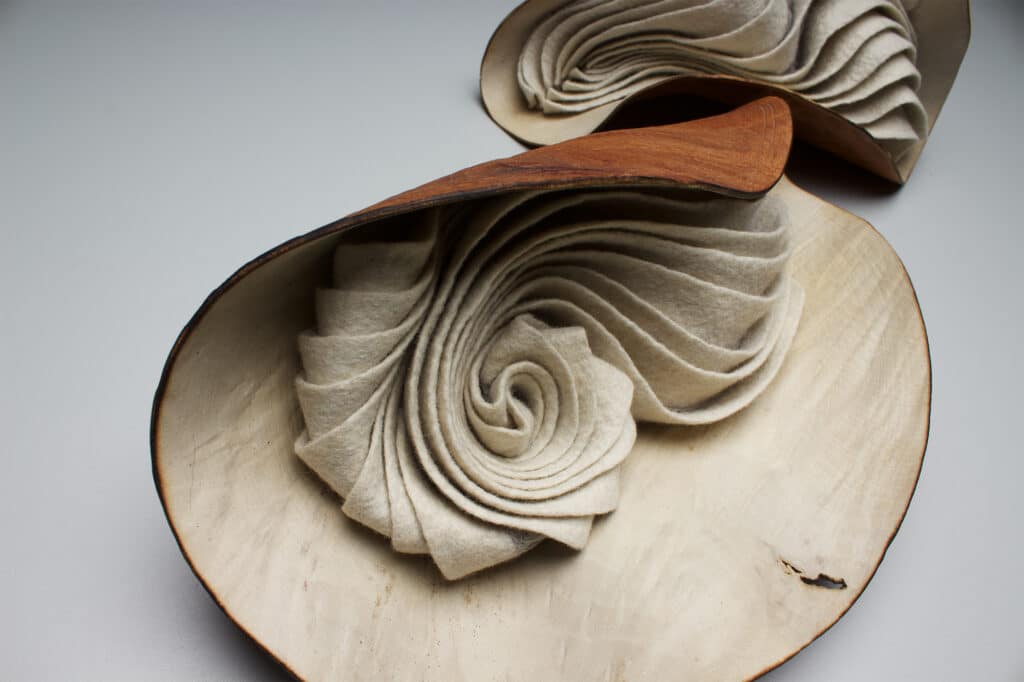 Visit Kristy’s website, and you will also notice her beautiful felt flowers. “These were a way to explore using felt and bringing the texture out of it. They are little mandalas, and it’s fun always to keep exploring new possibilities with combining materials.”

Some are small and light, so they can be worn; others are nine inches or even larger. “With the newest ones, I’ve started painting the silk. The shimmer on the surface of the petals is silk fabric that’s felted into the wall. And the tips are dye that’s painted onto the fabric before it’s melted into the wall. It’s a challenge of getting the placement right of all the colours before you start,” she says. “The final pieces are stiff enough to hold their shape but soft enough to be worn.”

To share her skills with others, Kristy also teaches workshops on making opulent, beautiful flowers.

“Everyone gets to work at their own pace. That’s the beauty of having these online workshops. Students can post photos of their work for comment or ask questions about something. And I can reply, and other students can come in and share comments or ideas. There is usually a period of activity when everyone is excited and working with their computer off, but anyone can come back any time.”

“Put your hands to work and give your heart to God.”

Kirsty believes that even if you’re not so much about God as a singular concept, being an artist is about putting your heart out to love and create something beautiful with your hands. 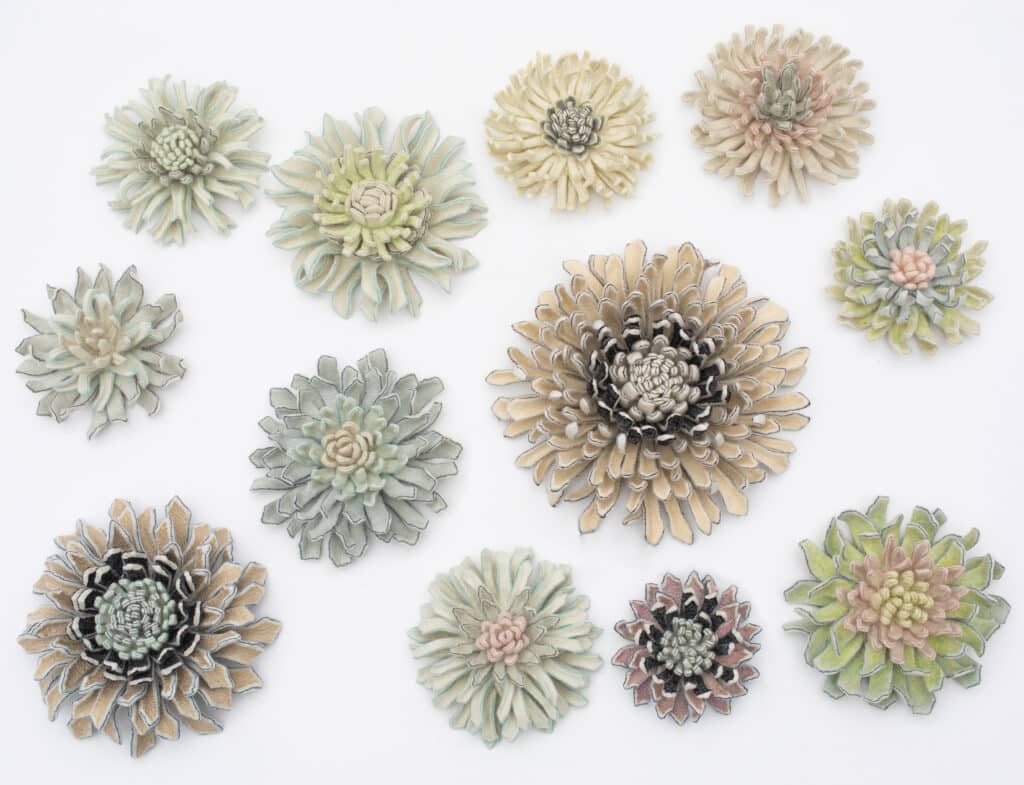 Kristy Kún’s experimental textiles advance the sculptural capabilities of hand-made felt through calculated, rising tangles of wool and plant fibres. Her richly textured surfaces, formed through a water and energy-intense process of rubbing and kneading wool fibres until they bond, are a contemporary adaptation of ancient methods in felt making. Compositions of disparate materials reveal artistic visions inspired by relationships and nature’s evolution and the materials’ fluidity.

She also offers a unique experience for felters to learn new techniques in textural felt-making from the comfort of their own homes. These home courses are supported with online video demonstrations, chat rooms for students to share work and receive instructor comments, and thoughtfully prepared tutorials containing tutorials and required materials. 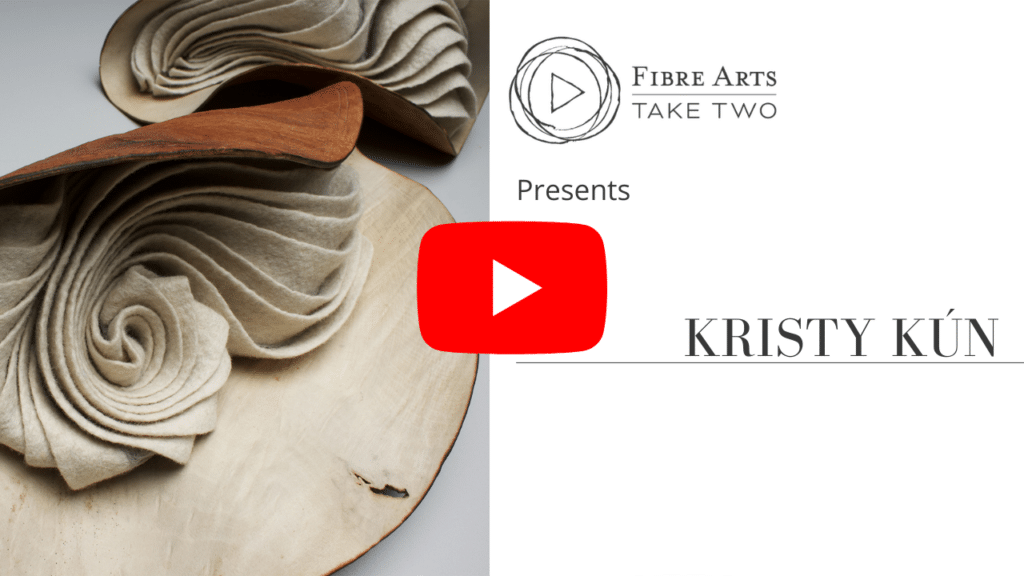