Richard Mcvetis: A stitch in time

Renowned textile artist Richard Mcvetis explains some of the story behind his well-known work 60 and discusses working the concept of time into his art.

Richard’s Friday Feature Artist Interview can be found at the bottom of this page.

Richard Mcvetis is a contemporary artist living and working in London.

Obsessed with the process, Richard uses traditional hand stitch techniques and mark-making as a way to make sense of the world by mapping time and space.

Properly probably best known for his monochromatic style and series of embroidered sculptures in the form of cubes, Richard has taken one of the world’s oldest crafts and transformed it into something astonishingly contemporary.

Richard is a self-proclaimed perfectionist, and his designs suggest a highly disciplined approach. But if you take the time to look really closely at his work, you may be surprised at the randomness and imperfection of each tiny stitch. It’s like a gift to those that take the time to slow down and really appreciate the time and tenderness that has gone into every piece.

Fibre Arts asked Richard a big question in our recent chat: What is time?

“I’m very interested in this idea of time and what it actually is, yet this sort of force in our lives dictates most of it. It’s so powerful in how it organises our lives, yet, it’s invisible, and we only see it through change. So I like to see time more as change. So we know things are happening because we get older, we get grey hair or the weather changes, or the seasons change. So for me, time is about change.” 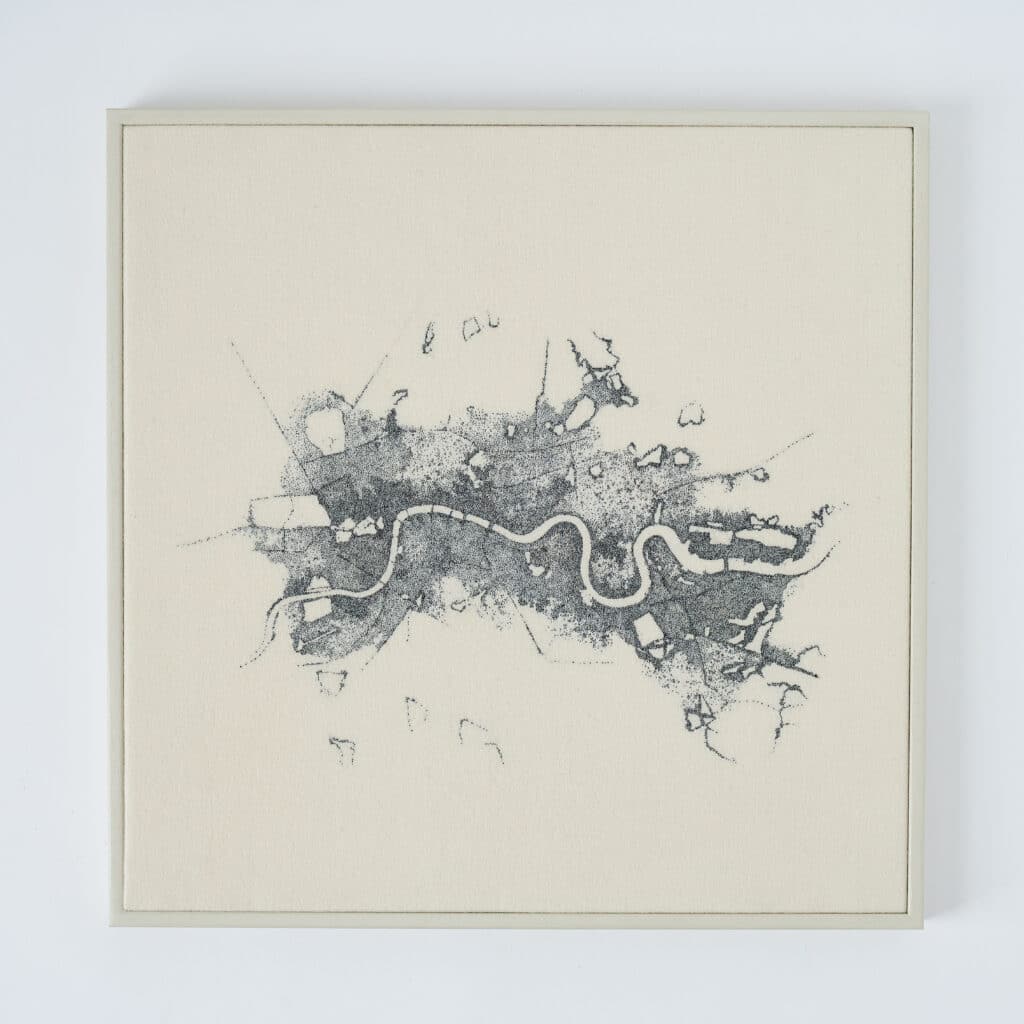 But Richard is very interested in what he calls “Subjective time. In a philosophical sense, time means different things to different people. I don’t think I’ll ever arrive at the correct answer. It’s an abstract idea, and I think about it in my work.”

Richard has always been interested in the idea of time, and he believes textiles are an interesting material to communicate time. “When you look at fashion, for instance, fashion immediately communicates an era or a point in time. You can look at something and say it’s 70s inspired, 60s inspired. So there’s that perception of time in terms of culture and how you look at fashion.”

“I also like the idea of this communication of the time. Quite often, my work is made in response to a specific moment. For example, I made a piece of work called five o’clock shadow, specifically in response to that idea of time. It’s my shadow on the floor at five o’clock, but it also communicates our idea of bodily time, when a man’s beard grows.

“I was really interested in sharing time, almost like little dots. So my processes use multiples of dots and lines and crosses, but the dots specifically are like punctuation. So they represent like moments of time like you would use a comma or full stop.”

Richard’s most famous work is ‘60’, five dozen variations of a stitched cube, each taking an hour longer than the one before. In its entirety, his cube collection represented over 1800 hours of work and was completed during the hours outside of his full-time job.

“It was a really epic project! I made it in response to the exploration of time and the magic number 60 that governs our lives. The whole piece is a reflection and investigation into this magic number 60. And then each of the cubes were 60 by 60; then I just kept on reusing this number and working in increments of 60.

“It was a physically and mentally quite draining project. If I was ever going to do it again, which I will not,  is work the other way around. So I started at one and worked my way up to 60. And what I should have done was start at 60 and work down!”

“The result was these very abstract patterns of time on each cube, each one different, so you can see how I made them all as flat objects. When I transformed them into three-dimensional objects, they turned into something completely different and unintentional. I love that sort of randomness, but the randomness is contained within this cube, and that’s what’s really comforting.” 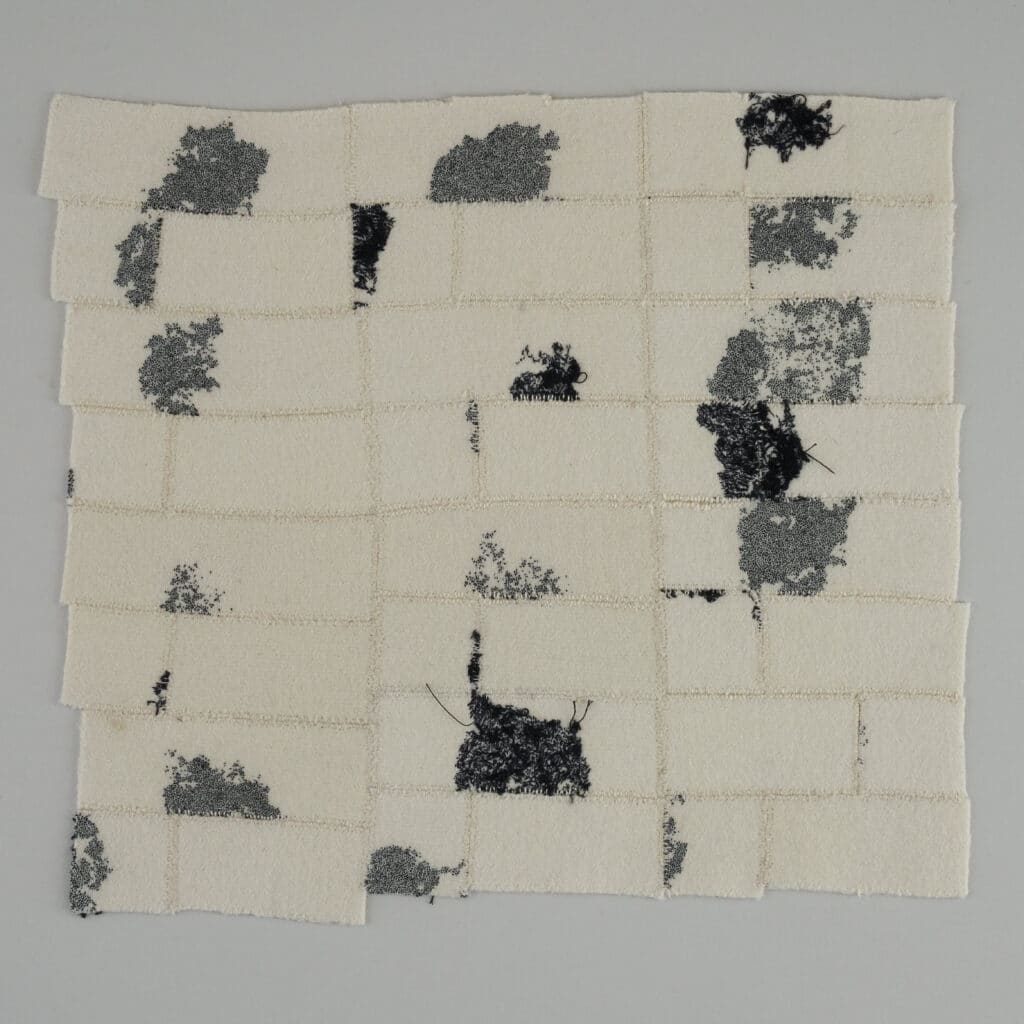 Richard researches his work with intensity and passion, explaining that, “I’m really interested in the way things work like how they function, both that in a physical world like how things come together materials and objects, but then also how things work at this very microscopic level, but also at this macro level.”

“We’re fundamentally made up of lots of little dots. So we’re all atoms, just all in these different formations and organisations, and I like how my stitches reflect this. It can be used as a metaphor for that, you know, I’m bringing all these stitches together to form something. But fundamentally, fundamentally, we’re all the same where lots of little dots put together in different configurations and all that, and I think that’s A really nice way to think about, like, we’re all the same, where there’s no gender, there’s no race. We’re all these dots just coming together randomly to form this quite unique thing, and it’s mind-blowing for me.”

Richard’s advice for artists and anyone else is to take notice. “Perspective is a really important thing to have in your life. I always say whenever you have an argument with someone, or you feel angry about something, let the world go round once and then address the problem because it never has the same energy. So I think that sort of distance and perspective is important.” 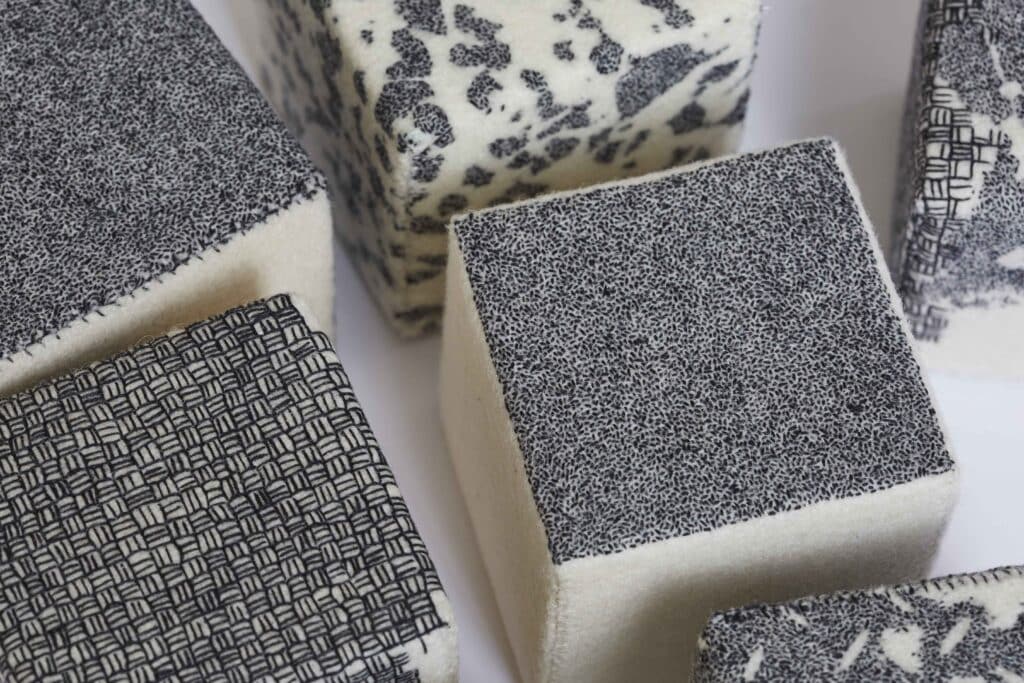 Richard’s artwork has been celebrated in galleries, art fairs and museums worldwide, including Iceland, Ukraine, Pakistan, and South Korea to name just a few places. He has taught extensively and has been invited to run masterclasses at a number of institutions, including the Royal College of Art, from which he graduated from in 2008. 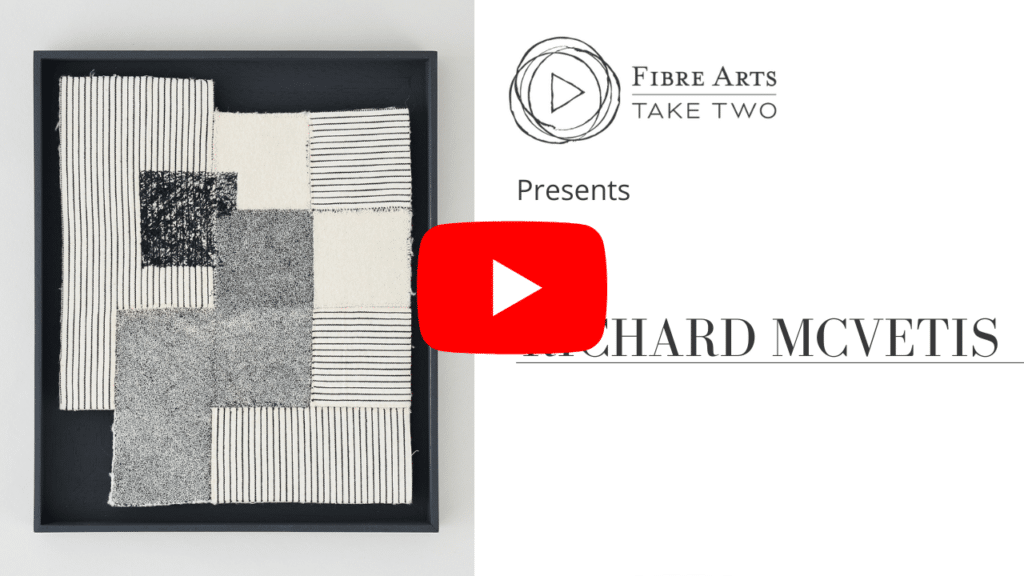