Lindsay Olson works in the space where art and science collide. Fibre Arts take Two had the fortune to talk to Lindsay about combining science and art.

Lindsay’s Friday Feature Artist Interview can be found at the bottom of this page.

Lindsay Olson is an artist who fell in love with science in the middle of a wastewater treatment plant. Art and science are deeply human endeavours, and Lindsay understands that scientific research communicated to the public needs imaginative, creative storytellers who connect scientific discoveries to human experience. Using her training as an artist, she creates engaging art that helps the public approach the intimidating subject of scientific research.

Lindsay’s work is a testament that artists and scientists both thrive on uncertainty and a sense of adventure. This very idea has inspired Lindsay to use her skills as an artist to understand unexplained science through her art practice. She does this by using textile techniques borrowed from high fashion to both connect with viewers and creates richly textured, stitched and beaded surfaces that reflect the research she invests in her artwork.

Lindsey filters the scientific inspiration through her artistic training to create artwork that is as diverse as science itself. Her unique pieces have been exhibited widely, and her works are currently touring Europe. Fibre Arts Take Two talked with Lindsay about her work and the bridge between science and art.

Lindsay’s discovery of her love of science was somewhat serendipitous, “My husband and I had bought a canoe and one day we were paddling down the channel,” Lindsay explains,  “And we passed this amazingly beautiful engineered waterfall. It was in the middle of nowhere, and I thought, ‘Wow, somebody invested, like, maybe millions of dollars to build this’. It was a lovely curved series of cascading waterfalls that come down and enter the Chicago canal. Finding out who built this amazingly beautiful but remote structure led me to the world’s largest wastewater treatment plant.”

Lindsay knew she had to get inside the plant. “It took about 18 months for me to get in there, but what I wanted to do was use my training as an artist to learn enough of the engineering in the plant to make art that would tell the real story about water in a dense urban area. I thought, ‘Wow, that would be a lot more interesting than these idealised paintings that I was working on.’”

Lindsay’s first lesson in merging science and art was the waste treatment plant. “Working on that project, I figured out that if I attended seminars, read books, and spoke with experts, I was able to learn. I would bring my drawing board to the pump house and try to decode which pipes’ colours did what function and everything.” 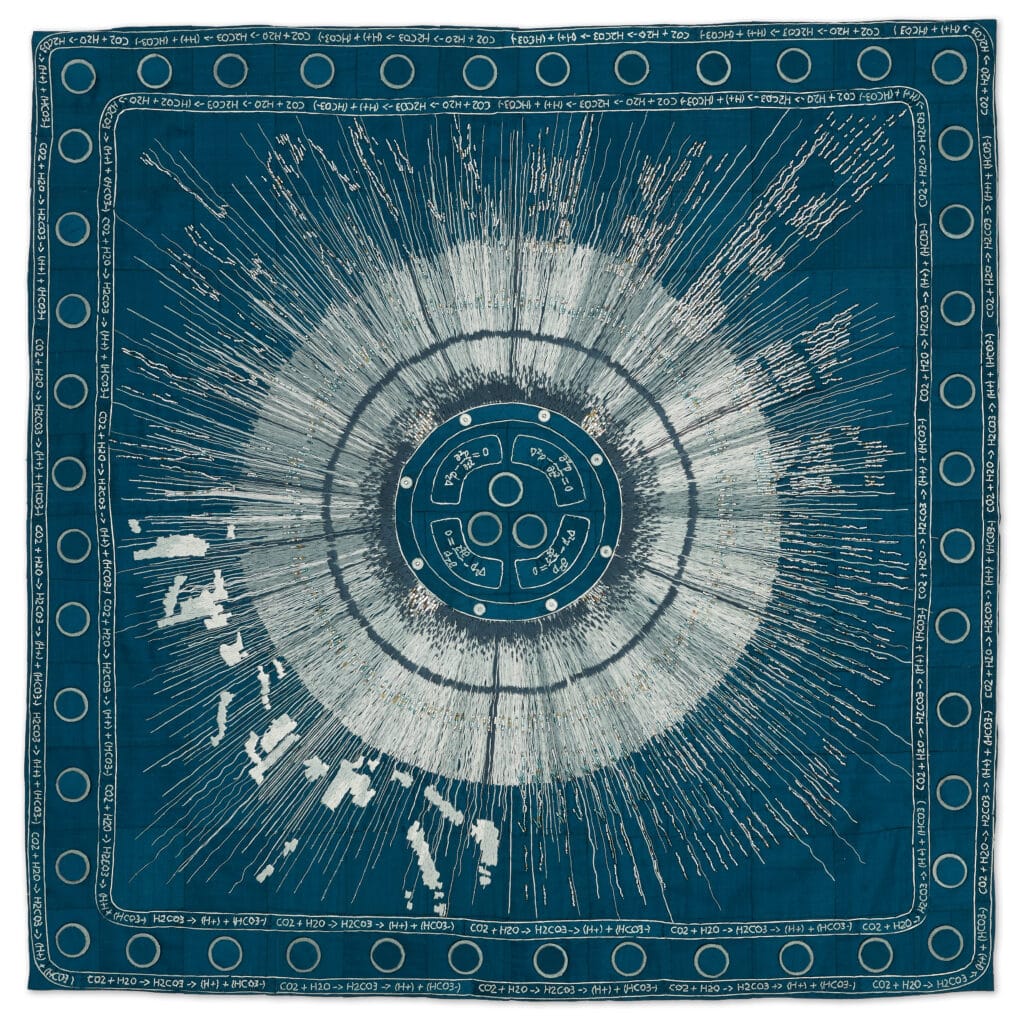 Lindsay’s focus ever since has been bringing two worlds together. “In our culture,” she says, “there’s a lot of separation between art and science, mainly because I think it feels awkward to go across those academic boundaries. Maybe artists feel uncomfortable with science because we don’t have as strong a pull to understand the world with that filter. And maybe scientists themselves feel awkward about art because, for some scientists, mine is the first artwork they’ve said they felt connected to. For me to be an ambassador for my profession, you had to bring art to people who wouldn’t ordinarily go to an art gallery or a museum.”

Lindsay uses her skills to catch people’s eyes. “If you think about print media, like Vogue, or any other really high-end home magazine, you have about three seconds to snag a viewer’s attention. This is very true of artwork as well. You can watch people at a museum or an art gallery, looking at art, or even a science fair where I showed work, and they’re going along, and then all of a sudden, they go, ‘oh, let’s take a closer look at this’. As an artist, I’m using all my skills that I learned in school for design.”

In fact, Lindsay advises less experienced artists to pay attention to print media, “If you as an artist want to learn how to do that better, study print ads because they’re trying to sell you something. Look at how the artists in advertising are using all of the stuff we get trained for in art school; to pull the viewer in and hold your eye on an image on an ad campaign.”

One of the pivotal occasions in Lindsay’s career was being invited to go to sea as a resident artist. “It was one of these really super serendipitous things,” she says,  “I was having a conversation with Dr Derek Olson, who happens to be my son. He is an ‘ocean aquastition’, who uses sound to study marine environments, particularly the ocean floor and surfaces of the ocean floor. He knew that I had done a few science projects, and I said to him at one point in the conversation, ‘You know, I’d love to go to sea for residency’. Derek looked at me, and he said, ‘I have a friend. She’s looking for an artist, somebody cancelled, and she wants to have an artist aboard this boat for a trip.’”

“I was invited to go to sea for three weeks with a group of ocean experts, which was totally amazing. The only reason I got on the boat was because I would be willing to work with the science team. So this was the first opportunity that I ever had to participate in science. It was a really intense, wonderful experience.”

Lindsay’s latest project, Land and Sea: Intimate Connections, is inspired by the ‘dead zone’ that is badly affecting the Mississippi River Basin. “I’m choosing blues and greens, and I’m using cotton because it’s vegetative. And I thought that’d be kind of a cool thing. And there’s a great big circle in all the pieces, and that’s to remind everybody that water is cyclical. There’s a water cycle that begins if you think about the ocean, water begins at the top of the highest mountain through snowpack and Glacier. That water trickles down the mountain to streams, the streams turn into larger rivers, and it ends up at sea level in the ocean. And then it’s evaporated into the cloud.”

For her projects to be successful, Lindsay has three parts that must all work together, “One, I want to make sure that the science is accurate. So there’s a lot of really sloppy science reporting out there. So make sure if you’re going to look at something that you dive deeply enough to go to trusted science sources. The second part is putting all my bag of tricks for art out on the table and choosing the proper colours. You want to pull in all your art training for the second part. The third part is bringing the project to the public. My art has a job to do. Its job is to help everybody understand that both science and art are required for a really rich life.”

For aspiring artists who also want to mix science with art, Lindsay advises having a sturdy ego, saying, “There are a lot of people who are just simply too busy with science. And that’s very, very understandable. You have to have grit, determination. I realised that even if I only understood about 10% of what these experts were telling me, I could do a lot with 10%. But it also meant sitting 90% of the time feeling completely lost and overwhelmed.” 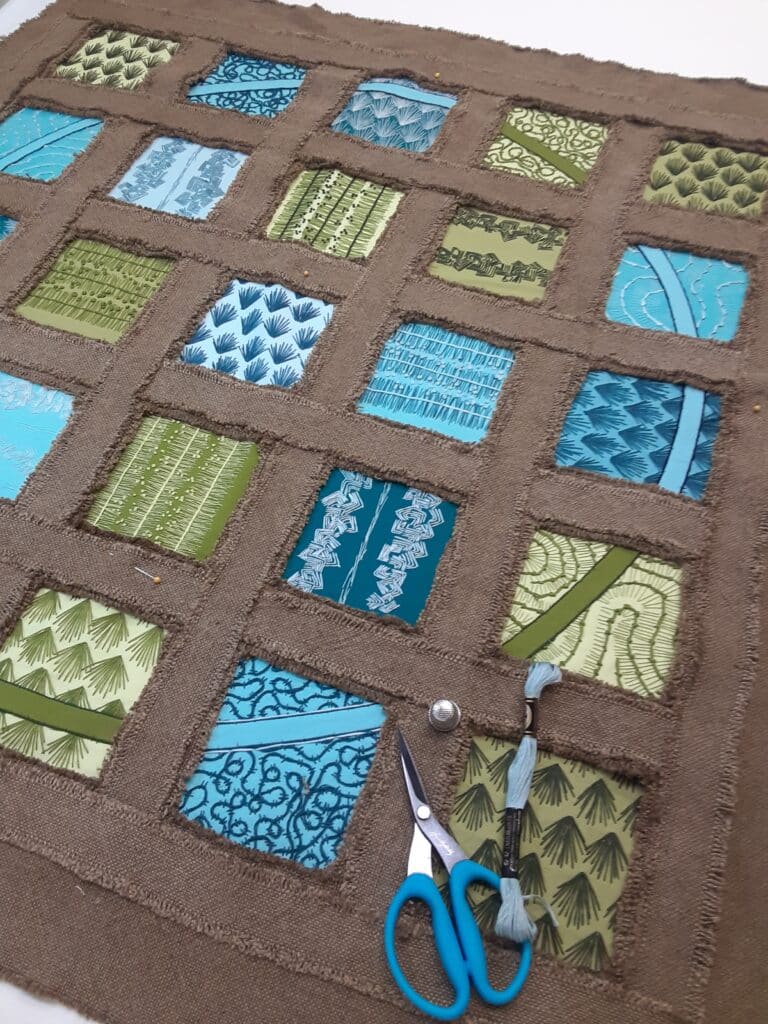 Both scientists and artists thrive on uncertainty and a sense of adventure.

Lindsay Olson makes textile art about science. Her work takes her out of the studio to exciting locations: an underground neutrino facility at Fermilab, the Large Hadron Collider in Switzerland, a research vessel in the Atlantic Ocean and the hidden vaults of the Field Museum.

Lindsay partners with scientists, laboratories, and engineers to learn more about the science that informs her studio practice and underpins modern life. She filters this scientific inspiration through her artistic training to create artwork as diverse as science itself. 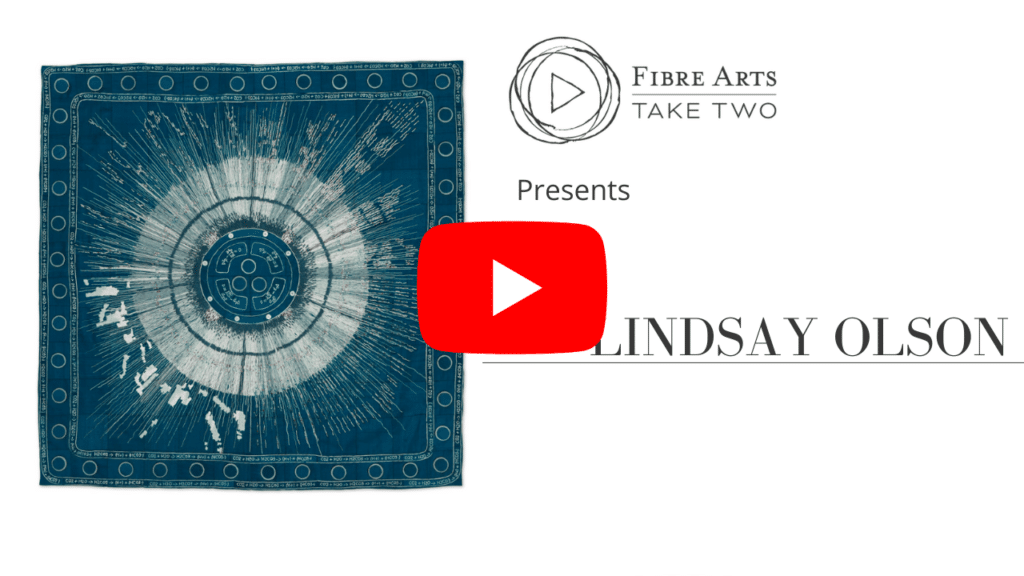