Wen Redmond: Making Art by the Seat of the Pants

Wen Redmond is technically retired but you can’t stop an artist from creating. Wen found the time to share her thoughts on art and the drive to create.

Wen’s Friday Feature Artist Interview can be found at the bottom of this page.

Wen Redmond is an internationally recognised mixed media and fibre artist, known for her unique use of fibre, combining photography, paint and stitch into one of a kind artworks.

It’s hard to pigeonhole Wen into one category. She is an artist whose work embraces several media including digital processes, surface design, blending of boundaries of photography, mixed media and collage. Each work is individual and a communication between her inner imagination and later the viewer.

Although technically retired, Wen loves sharing her knowledge with others, through her website, DVD tutorials with interweave publishing workshops, and through her popular book, Digital Fibre Art and Mixed Media, where she takes the fear out of working with digital technology and fibre art.

Wen has been published widely in books and magazines, and featured on quilting arts television. Her work has been included in many juried exhibits and collections, including Marvin Fletcher’s quilt national collection. Wen found the time to talk to Fibre Arts Take Two about her art and the drive to create.

Wen is technically retired but that’s not how things work for an artist. “You’re never not an artist,” she says, “I’ll be up, I’ll go on a walk, and I’ll absorb whatever it is the energy of the day, or I’ll be reading something online and a quote will come up, and I’ll absorb that. And the next thing you know, the stuff is churning around in there. And then if you don’t run to your studio and get it out, it can explode.”

Wen laughingly agrees with her husband’s assessment of her as ‘a woman possessed’. “I used to feel badly about it,” she laughs, “But I just finished reading a book by Matthew Fox called Creativity. And one of the major points I gleaned from the book was that creativity is something that you should honour that it’s not frivolous. It’s a beautiful gift.” 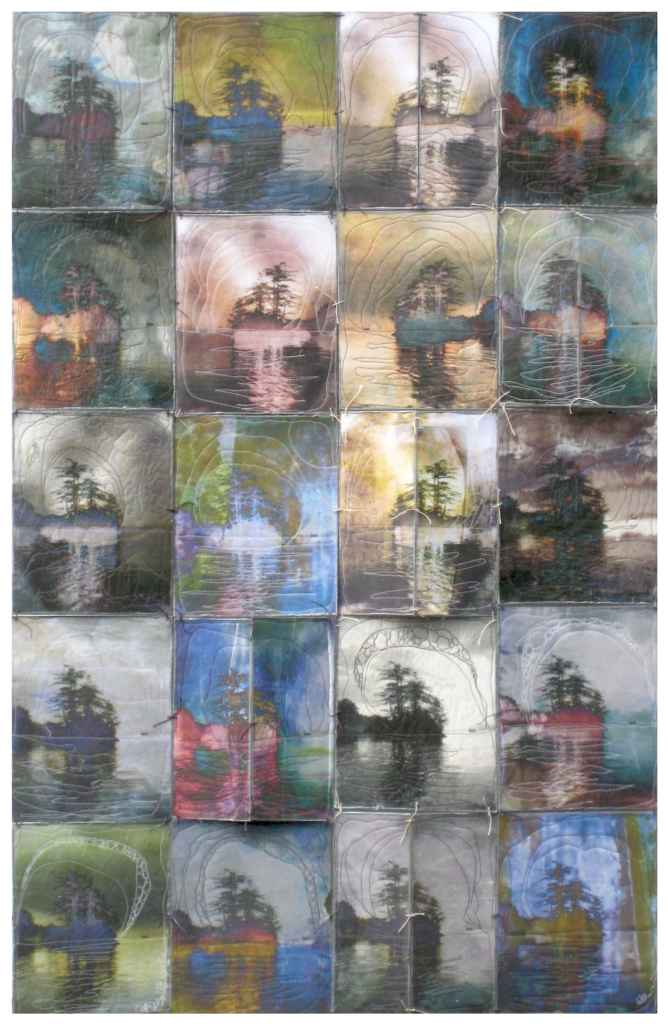 The power of mistakes

If Wen’s years as an artist have taught her anything it’s the power of mistakes. “You find that you make mistakes. I’ll print something, and think, ‘I don’t like this’. If you insist that something has to happen a certain way, then the art is forced. So I’ll make marks or I’ll do whatever technique, then step back. I put a sheet over the piece of work on the wall, on my working wall. And I don’t want to see it because it’ll haunt me.

A month later, I’ll look at it and somehow it’s not so bad. A lot of times my mistakes turn out to be really great.”

Making art by the seat of her pants

Wen has never been the sort of fibre artist whose work could be pigeonholed. She has never been able to stick to one style or medium. “I make art by the seat of my pants,” Wen says,  “When I wrote my last book, I was making a sample. And then it was like, ‘Oh, I can make this sample. Oh, look, that gave me this idea.’ And ‘why don’t I try that?’ I’m an idea maker, I seem to continually make ideas.”

Fibre Arts Take Two asked Wen about her process and her answer was characteristically thoughtful and insightful.

“I adore being outside,” she begins, “I absolutely love nature and that’s also a place where I go when I have a plan and it’s not working out. I’ll go for a walk and it will take 15, 20 minutes for the monkey mind, the chore list and the to-do and all those things to calm down. And then I start absorbing what I’ve absorbed already, I guess, subconsciously. An idea will pop in about how to resolve my art piece. It’s a percolation process. It doesn’t only happen when I’m out of my studio, but it happens often when I’m out and about by myself.” 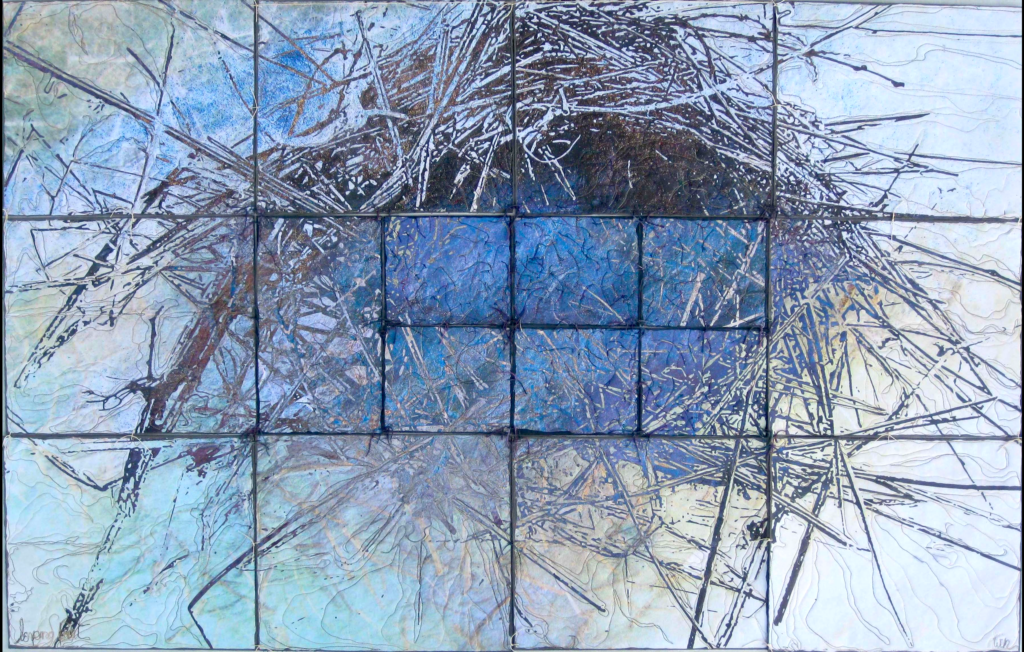 Wen will soon be adding a new book to her list of accomplishments. With her next book, she explores new avenues in fibre arts. “This is what I do; fibre on surfaces,” she says, “However, with the new book, I’m going to be working with newer substrates, some ways of putting the substrates together, and some new techniques that I’ve discovered since I published my last book. Some workshop experiences that I’ve never published are going to be in this book because it all builds on each other. When I was writing the first one, I kept having to go back, ‘Oh, well, this, this technique evolved from this’. And because I did that it all builds up. So that’s what I’ll write about.”

Wen loves to play with words as much as fibre. She wrote a beautiful poem especially for her interview with Fibre Arts Take Two, which you can read below:

Collected in my mind’s eye.

And revealed in my art.

I begin in the flow,

Bubble up from the unconscious,

Allowing the outside in,

And the inside out. 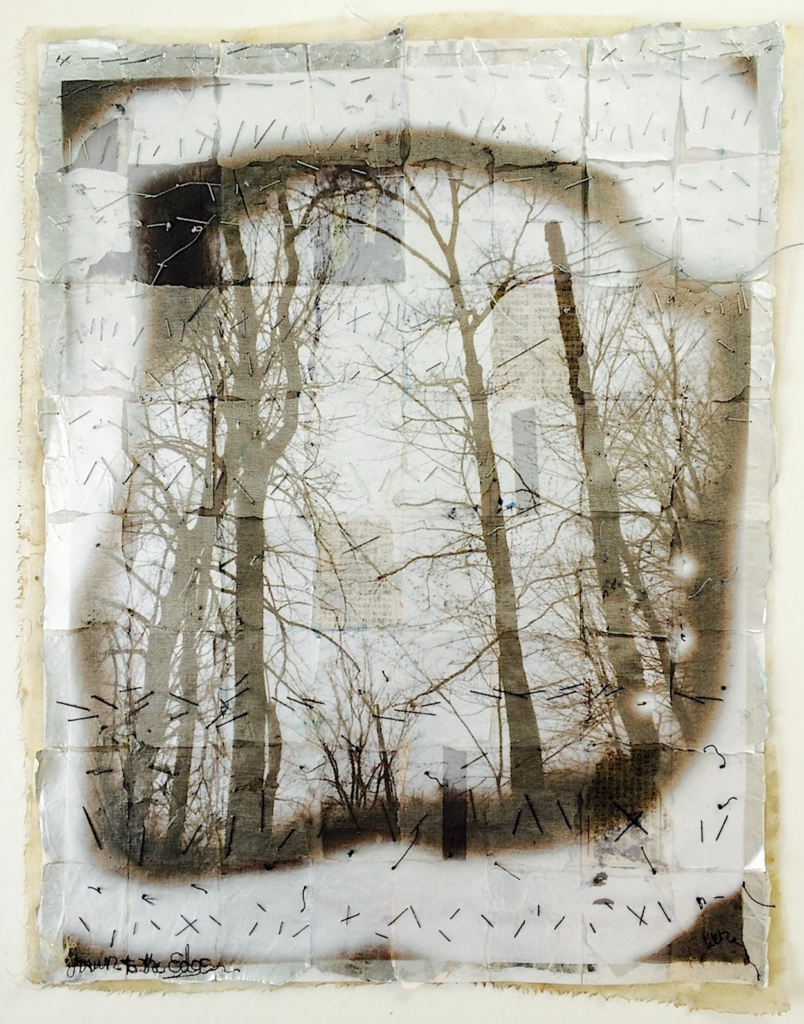 Wen Redmond, a lover of nature, delights in creating dialogue and changing perspectives of photographic art.