Julie’s Friday Feature Artist Interview can be found at the bottom of this page.

Fibre Arts Take Two caught up with Julie about how she ended up drawing from the scientific world to create stunning works of textile art.

“At school, I was totally immersed and focused on art. I really enjoyed doing it, but I didn’t enjoy my teacher that much. It was my biology teacher who had the impact, teaching me about nature and the way things worked.”

Julie’s early career saw her working in a veterinary laboratory and in medical laboratories, but she still missed the art part of her life. “I decided to do some night classes while I was living in London, and my love of art came back to me.” Returning home from her overseas travels, Julie enrolled in a textiles course to learn about dyeing, spinning and weaving. “I had a ball, and I haven’t stopped since,” she explains, looking back on her 30 years in the art world.

“I had a studio in North Melbourne and taught at RMIT Textiles. Eventually, I met someone and relocated to Canberra, which is where I am now. This has enabled me to continue my studies in the arts at ANU, where I started and completed a Master of Arts. These studies reconnected me with science as I found myself fermenting fruit onto fabrics and using a lab where I could carry out experiments. I came full circle and realised that my artistic practice is actually heavily aligned with science and that it is valid to merge the two.”

Julie creates complex works with many layers and messages that blend science and art. “I spend a lot of time doing research and jotting down notes to get a grasp of what it is I want to convey,” she says. “I like to learn new things. When I was researching Charles Darwin for a particular project, I came up with a series of glassworks engraved with hybrid creatures to represent the fears surrounding the publication of his book The Origin of the Species.”

After researching Charles Darwin, Julie decided to pay homage to the unknown female botanical collectors of seaweeds in the 19th century. This became part of an exhibition called ‘The Hidden Sex’, celebrating the women who worked for male scientists but were never acknowledged for their efforts.

One of Julie’s works, ‘Submerged’ is created from collected seaweeds to represent the women collecting seaweed from the ocean while kitted out in boots, petticoats, crinoline, gloves and hats. “I cyanotyped the work in different shades of blue, so the viewer feels like they are moving, but the name reflects that women were submerged and seen as decorative items even when they pursued careers.” 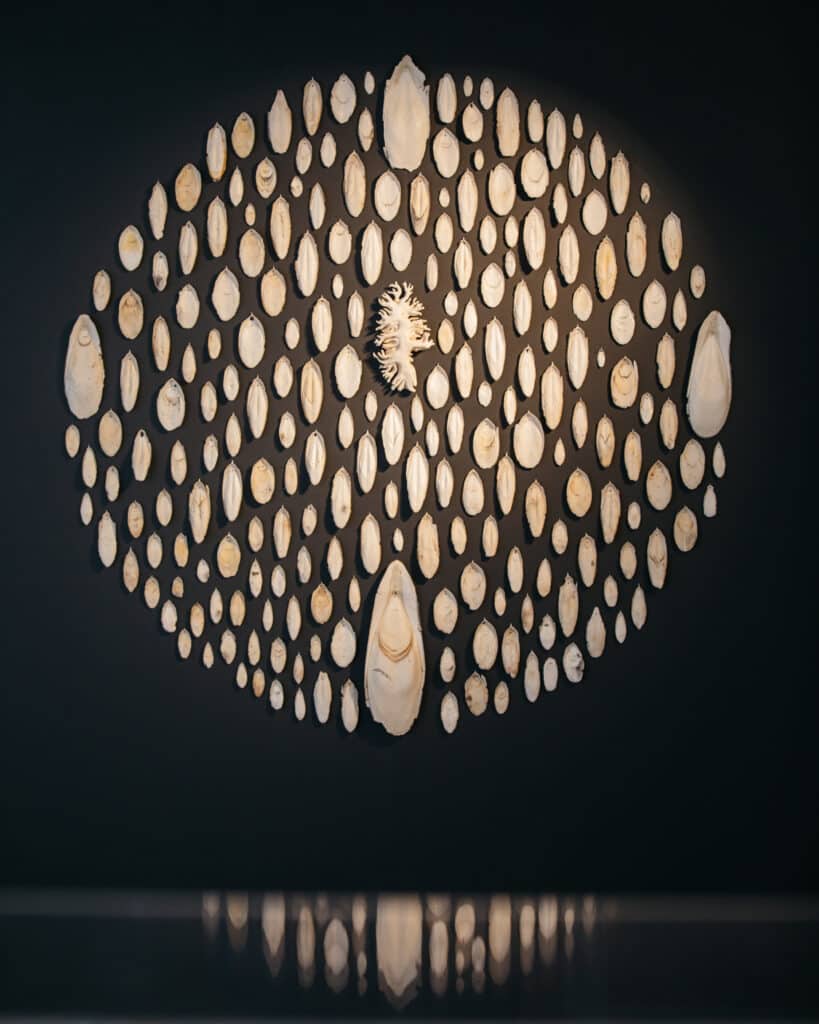 The aforementioned work came from a residency at the National Australian Museum in Canberra.

“Once my kids had grown up and left home and I had formally moved on from teaching I was able to apply for residencies. Over eight or ten years I have managed to get to a lot of countries, with a plan in mind of why I want to go for a certain residency. I do the research; I know what I want to get out of it and most importantly, what I want to give back to the community.”

In 2016, Julie focused on female botanical collectors. Chance led Julie to meet the curator of the National Museum of Australia and the application to be an artist in residence.

The Museum has botanical collections, which made Julie an ideal fit. “Museums have a lot of botanical objects and specimens. I looked and identified a few things I wanted to research, then applied for funding through the Australia Council, which was granted.”

Julie came across two albums filled with seaweed, made between 1854 and 1888. She spent three months researching the images from the album to figure out who had collected the specimens. “I kept researching for 7 to 8 hours a day, trying to find out as much as I could about 19th-century seaweed collectors and towards the end of my residency, I was able to find who had collected for the album and even to discover more of their work. The collector was a ‘citizen scientist’, and I have found 15 of their albums so far. The museum was overjoyed because they couldn’t display objects if there isn’t a story. My work meant they could get the album out of storage and put it on display. I ran a workshop for children about nature collecting, and we were able to track down a relative of the person who made the album. This has been the highlight of my career, connecting people with objects from the past, retelling stories and reconnecting them back to the future.”

Julie even travelled back to Ireland to meet the descendants of the collector. A documentary about her journey and the resulting story of discovery has been made. 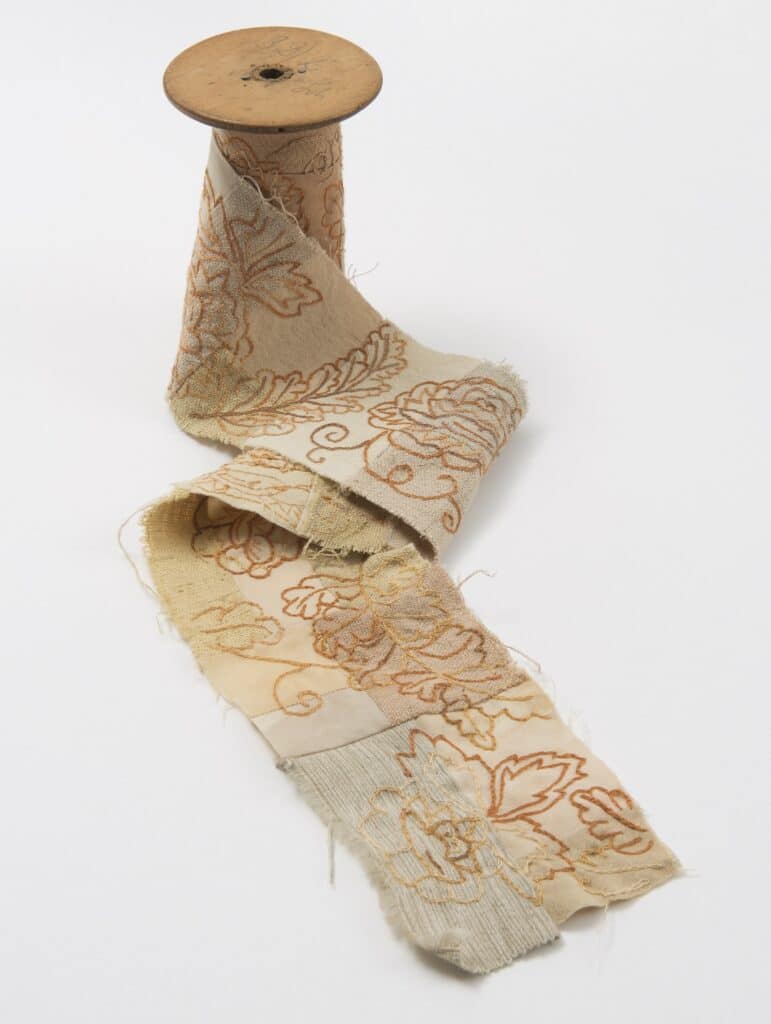 Julie’s unique blend of experience in the art and science world has positioned her to make wonderful discoveries and to connect the past with the present. Despite this, she has experienced her own struggles as an artist.

“It is really hard to find your own voice. But keep going. It’s all about repetition. You will fall into a groove if you stitch or do something long enough. Put the voice that says ‘you can’t do it’ back in a box. Make yourself draw or create every day, and you will improve amazingly. It is important to get out of the way of your own negativity.”

Julie reflects on her ‘two worlds collide’ experience as an artist…

“Nothing you have done or will do in your life is wasted. It’s all experience. For me, it just comes around in the circle. I didn’t think about art so much when I was working in science. But when I got back into art, all that science, knowledge and practice helped me to become an artist that was different from everybody else by using it together.

So it doesn’t matter what you’ve done. That is how you bring your personality and your own take on things by your experience, whether that may be emotional, or physical, workwise, or whatever. Life is a circle. It goes around and around. Your life is completed by all the things that you’ve done.” 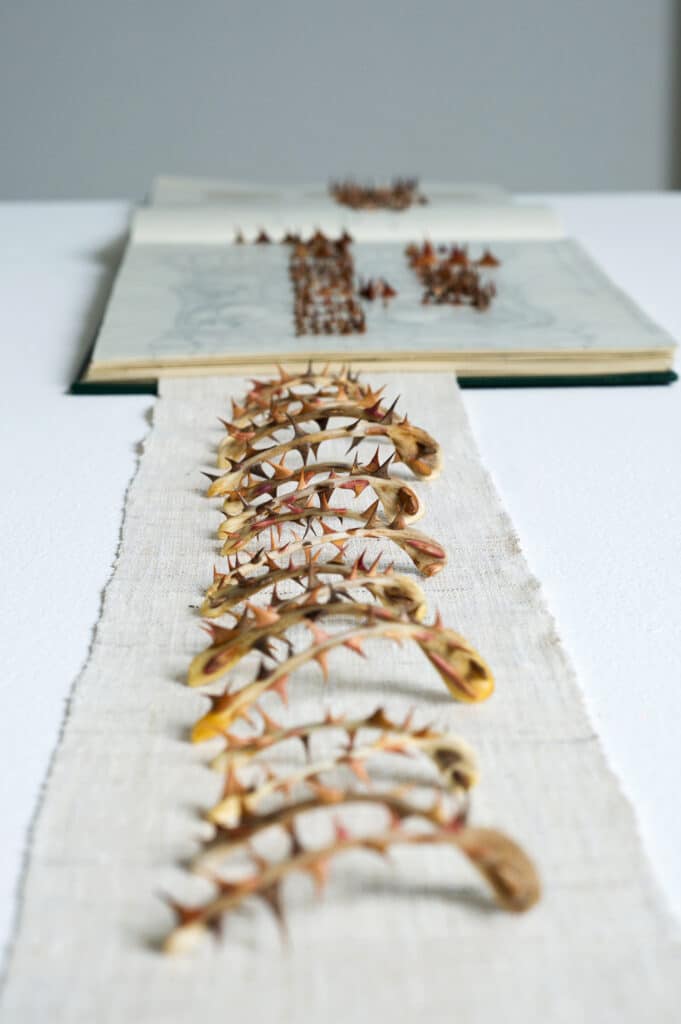 Julie Ryder is a Canberra-based textile designer who has gained national and international recognition for her work. She is a practising textile artist, designer and educator. Originally trained in science, Julie retrained as a textile designer at Melbourne Institute of Textiles and started her own design studio focussing on designing and hand-printing fabrics for home-wares, fashion and interiors. She completed a Master of Arts (Visual Arts – Textiles) at ANU in 2004.

Her hybrid practice combines her knowledge of science with her love of textiles, and she uses nature as both muse and co-collaborator. Natural materials are used for dyes and as materials for paper-based artworks.

She has been the recipient of many awards, grants and commissions, and her work is represented in numerous public and private collections. 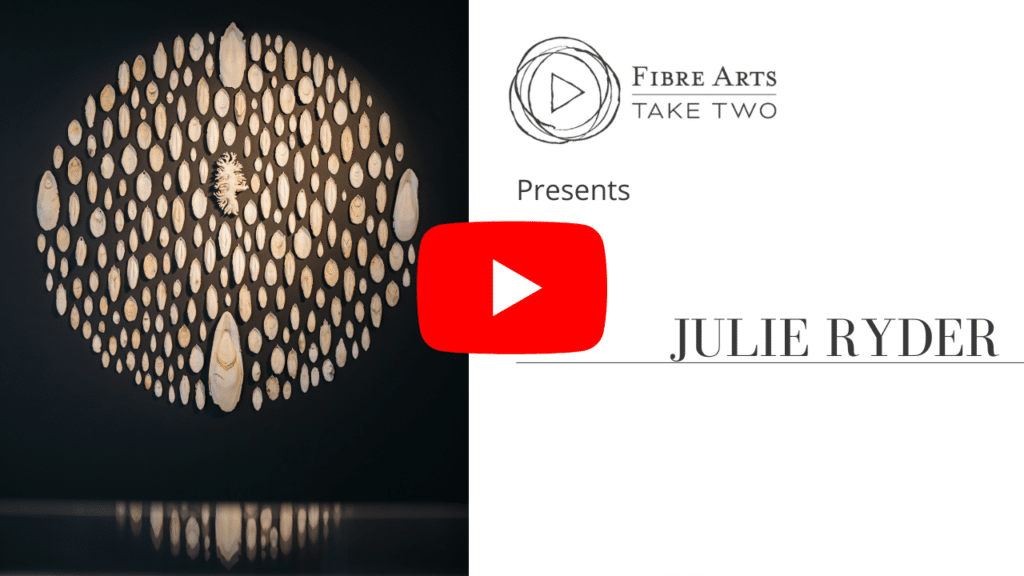