Barbara Schneider: The unseen and the in-between

Wabi-Sabi is the Japanese philosophy of seeing beauty in imperfection. We spoke to Barbara Schneider about Wabi-Sabi and other parts of her artistic journey.

Barbara’s Friday Feature Artist Interview can be found at the bottom of this page.

Barbara Schneider is an artist who uses nature as the starting point for creating abstract, sophisticated interpretations in mixed media. She began quilting in 1996 and discovered the pleasure of working with cloth, paint, dye and thread. Her ongoing interest in the Japanese concept of Wabi-Sabi and finding beauty in the things that are imperfect, impermanent and incomplete is at the core of all her artwork, capturing the essence of images made of light and movement, images that are infinitely variable.

Barbara started her career with training in design, “I went to college at the Institute of Design in Chicago for visual design and came out of that with a degree in visual design, and worked for quite some time in the publishing industry. Along the way, I did a Master’s degree in art and also an awful lot of business stuff. I worked for an educational publisher for close to 20 years and went from designing to heading up that department. I ended up with a broad background in all educational publishing.”

In the end, Barbara felt the need to express herself more creatively. “It was in 1996 that I decided I really wanted to get back into doing something more tactile. I had been doing some papermaking but by the time I got things set up and got something done, the weekend would be over. So I decided I was going to do something each day, just a small quilt piece or explore a technique, one a day, and they just continued to accumulate until I had 365 days. When I stepped back and looked at that, there was nothing in any of those 365 days that spoke to me about my work situation. That made me stop and think about maybe it was time to figure out how to change my life. I took a lot of workshops and gradually developed a style and tried to combine that with my interest in Japanese art.” 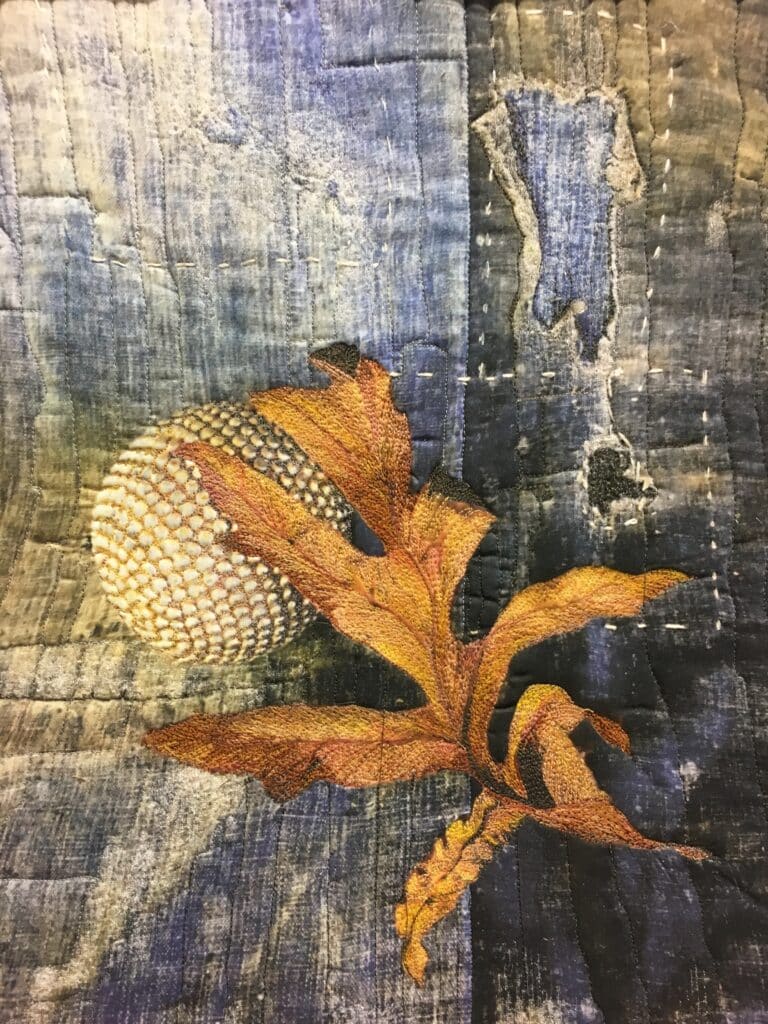 The inevitably of textiles

Despite the time it took Barbara to find her way to the world of fibre art, in some ways, it was inevitable. “I think it probably was always there, even as a kid and young adult. I did a lot of sewing, and I always loved the feel of fabrics and stuff.”

Barbara likes to produce work in series, a tendency that has its roots in her love of Japanese arts and crafts. “I do like to work in series. It all falls under an umbrella. I think of that as an umbrella of that Japanese concept of Wabi-Sabi and really finding beauty in things that are imperfect or ephemeral.”

“There’s something about that whole concept and how much I like Japanese art and craft that became kind of the overarching thing, so if I was going to explore something, it fell under that. This helps to at least keep a little focus. I’ve just really committed myself to working on things that fall in series so that there’s a depth that happens in terms of that exploration, and what you’ve learned from one piece you then play out in the next and the next in the next. It feels very centring.”

Barbara finds walking in the woods gets her creativity flowing. “I do a lot of walking in the woods. I started photographing not only the leaves, downed trees and tree stumps, which, going back to the Wabi-Sabi concept, most people would just walk by and think it’s a dead tree. But if you photograph them, there’s an awful lot of beauty in the patterns of those stumps.”

With her keen eye for finding beauty in perfection, Barbara’s photos transform into stunning art. “I take those images and manipulate them in Photoshop to emphasise things and play out the ideas of how they might become a large quilted piece. Then, after I’ve manipulated them, I send them to be printed, and when they come back, I do more surface design techniques to most of them, not all of them, and then a tonne of stitching to create another layer of patterning.” 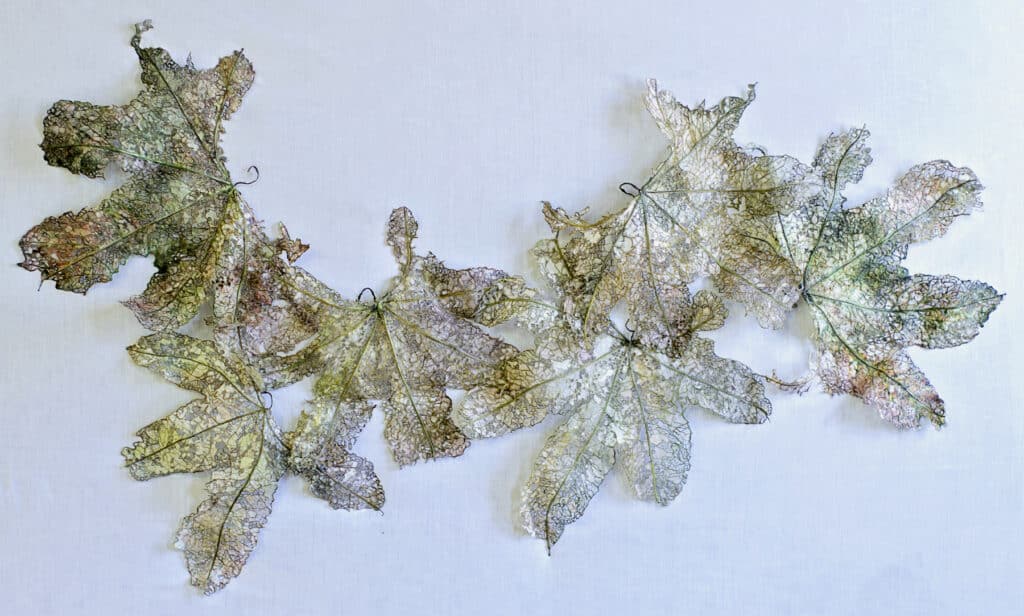 Seeing the unseen and the in-between

Barbara left our chat with a beautiful quote from Leslie Sutton. “The Gift the artist offers to share with us is the mindful and prayerful act of seeing where, in order to make material from their thoughts and ideas, they have to spend time noticing, looking intently, making careful observation of that minutia of things.

The negative spaces between objects.

The expression and emotion of faces

The effects of light and shadow.

Shades of colour, variety of texture, shape, and form.

This act of seeing slows us down and invites us to pay attention to the moment, to be still and not to rush. This is a form of prayer where we become detached from our own limited perspective and make way for a wider, more compassionate understanding of ourselves, others and the world we inhabit.”

This perfectly sums up Barbara’s approach to art, nature, and life and her incredible eye for the in-between and the unseen. 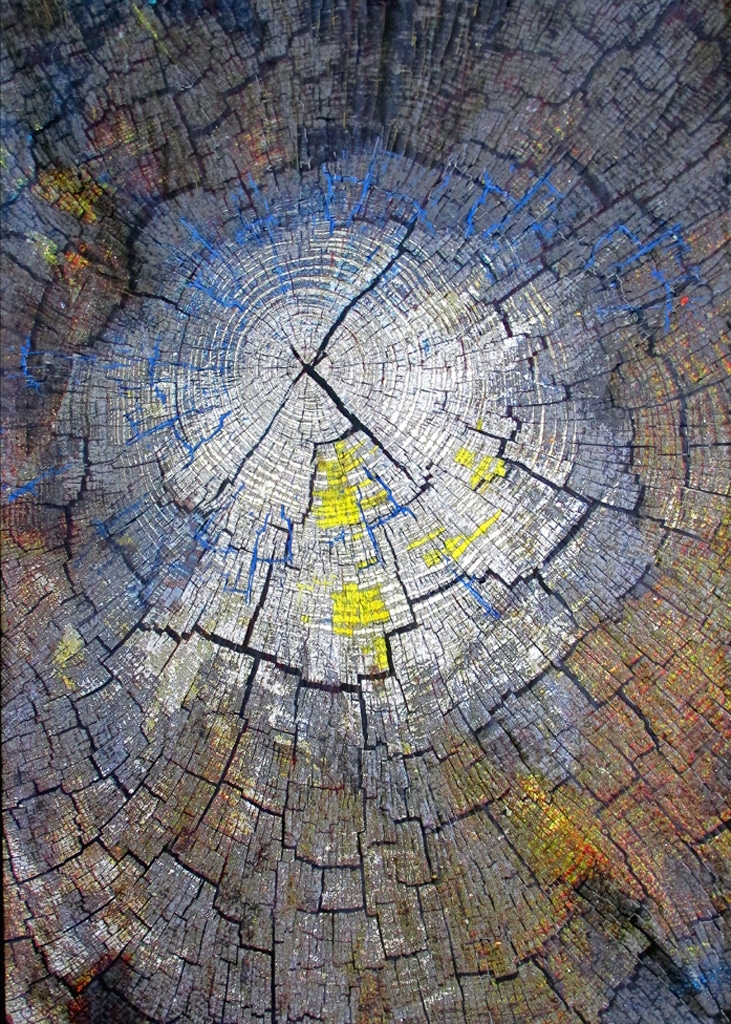 Barbara Schneider is an artist who uses nature as the starting point for creating abstract, sophisticated interpretations in mixed media. Her work is meant to make you view nature with new eyes.

Barbara Schneider began quilting in 1996 and discovered the pleasure of working with cloth, paint, dye, and thread. Her interest in the Japanese concept of Wabi-Sabi strongly influences the work. She has an extensive surface design and teaching background and exhibits nationally and internationally. Her artwork is in both private and public collections. 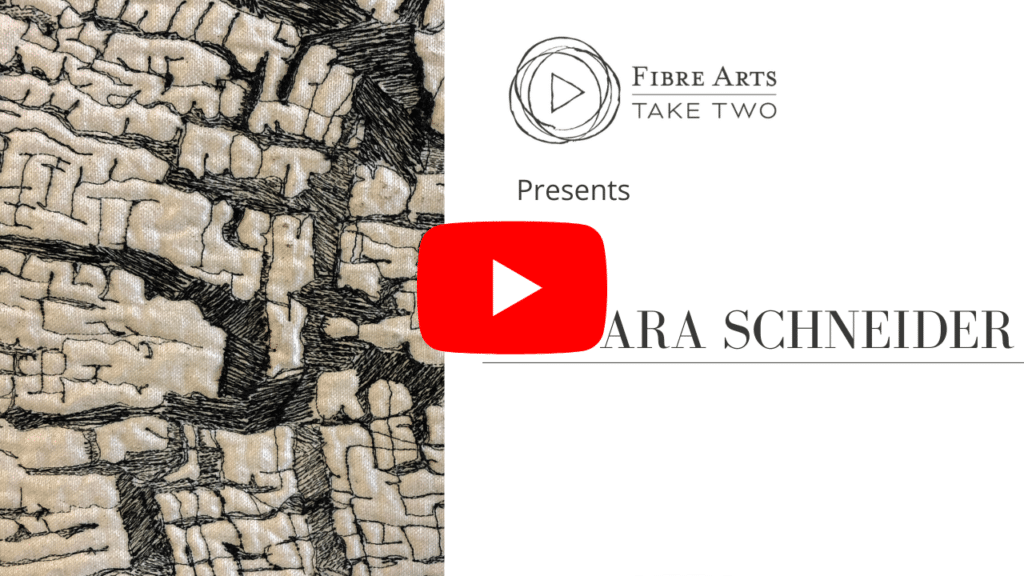