Gizella Warburton: What Isn’t There

Artist Gizella Warburton is as interested in what isn’t there as much as what is. She took Fibre Arts Take Two on a journey into her visceral artmaking.

Gizella’s Friday Feature Artist Interview can be found at the bottom of this page.

Gizella Warburton is a fine artist whose practice is infused with texture, intuition and reverence. Mark making is an intrinsic part of Gizella’s practice, shadowed, scratched, stained, scarred, pierced, wrapped, stitched and woven.

Her work has a raw and simple materiality with layers of detail that are revealed or hidden as light and shadow pass across and through the surfaces. She describes her relationship with making as visceral.

Gizella feels where the work emanates from, as much as she can see it. It’s no surprise that Gizella has exhibited globally from Paris and Italy to the US and China. And in addition to making exhibition work, she has been commissioned to deliver numerous creative learning projects in partnership with galleries and museums and heritage organisations.

“I started by just building very simple layered stitched collage pieces,” explains Gizella on how she discovered vessels, “Almost like patchworks that reference a lot of things that resonate with me like ancient crafts, warm cloths. I love the raw simplicity of them and the fact they were absolutely imbued with the hand of the maker, the dust of their travels. I felt they were very powerful.”

Gizella’s inspiration was also highly external, “Things came out of noticing,” she says, “I live in a rural area so landscape and the seasons, particularly in the changes, really get under your skin and into your sensibility. I was responding to light and space and shadow and what I was absorbing.” 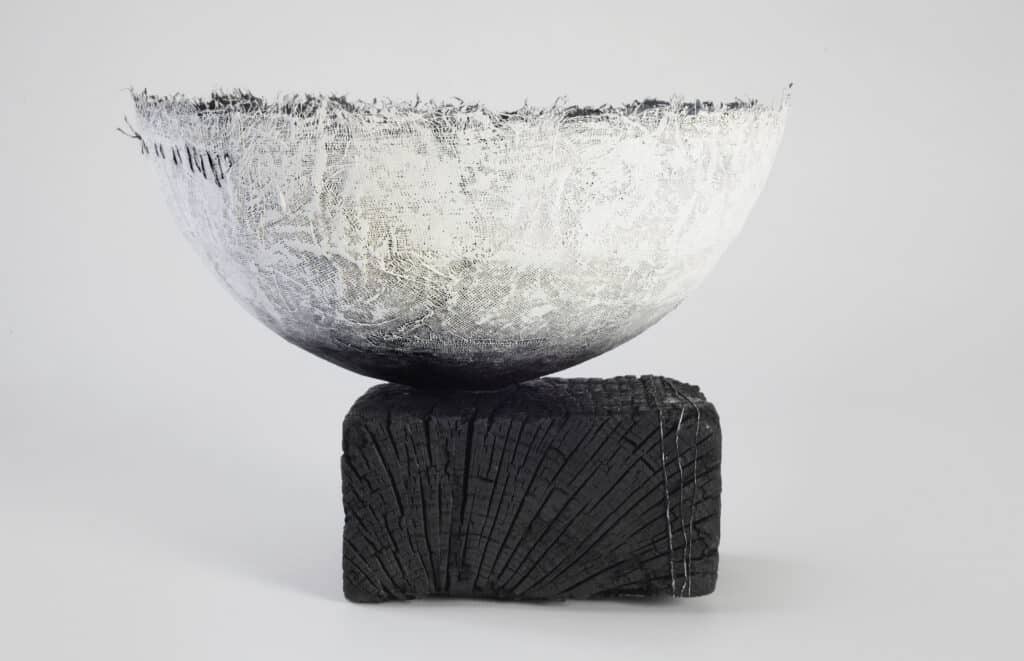 To Gizella, vessels are so much more than a simple object. Rather, they present a slew of symbolism, “There is a real thing about containment,” she says, “and what isn’t there as much as what is there and what they symbolise. I wanted to take on my layered wrapping into three-dimensional form, and again, that containment, that sense of presence.”

Despite her poignant interpretations, Gizella’s art did not appear overnight, “It evolved over many years. I tried different ways of doing it. I had a sort of an idea in my head of what I wanted it to feel. And so it’s a case of getting there. But the vessel, I think, is just hugely symbolic.”

Gizella’s process may vary but time is always essential, “Sometimes I begin with forms,” she says, “and sometimes, I can focus on the flow. You get drawn in different directions, but they do take months. There is a process, and things need to rest in between before you can do the next bits that you want to add or take away. You can’t rush them… they will not be rushed.”

Taking time means Gizella has more than one piece gestating at a time, “I also have works in progress,” she says, “I get to a point, and then they will just be in my studio. And then I will pick them up and start them again and again. I think a lot of it is where you are with yourself as well as what you’re working on and why.”

Gizella uses burning as one of her primary ways of mark making, “The burning came when I first started creating vessel forms,” she says,  “but I wanted to juxtapose them with the ground because I collect and gather and also I love wood and weathered wood. I was looking for some old large boards. Where my studio is, there is a guy who works around the place. I asked him if he had any old floorboards, and he came up with the most amazing old boards. He dragged them out of the bottom of a bonfire because he was just about to burn them. They were huge, and I had to clean them up, but I think the symbolism of saving them from the fire was quite interesting, and it permeated into why I started. It’s quite a primal thing burning, it’s an elemental thing. 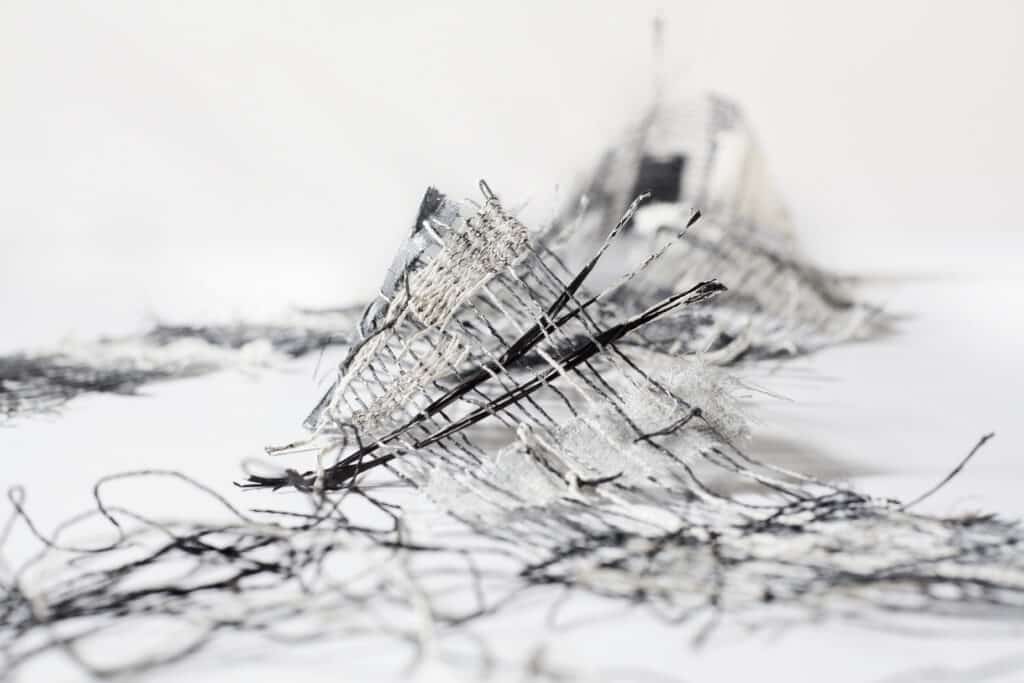 In creating her vessels, Gizella landed on one of the simplest yet elegantly intimate methods, “It’s a very physical process. You are very intimately engaged with the material. It’s a very tactile thing. When I was beginning to think about vessel form that I felt reflected what I was doing, I tried several different things. But in the end, I found that actually, a very simple balloon format is a really good starting point because it’s so simple.”

The application of her own breath creates a delicate intimacy for Gizella, “The other interesting thing, for me, was that because you are inflating the balloon with your breath, it’s actually, a very intimate process. The fact you are often having to use several forms, and you’re supporting it at various stages, it’s a really quite visceral thing and connects to the way I evolved the work.”

Led by the piece

Part of the visceral process for Gizella is never knowing quite how a piece will work out, “You’re doing the physical making, and I have an idea where it might be going, but I am led by the piece I’m working on because they will all bring their own characteristics, and you respond to what’s happening as much as have a fixed plan. It’s not really a conscious thing. I never set out to think, ‘right, I’m going to do this many’, and then work out, ‘well, what am I going to do?’”

When asked what she is most grateful for, Gizella says she is honoured to make a living as an artist. “I suppose when I think, ‘Gosh, I’ve been doing this so long’, and that I do sell work and people do collect my work is lovely. That people respond because that isn’t the reason you make the work. The work just comes.” 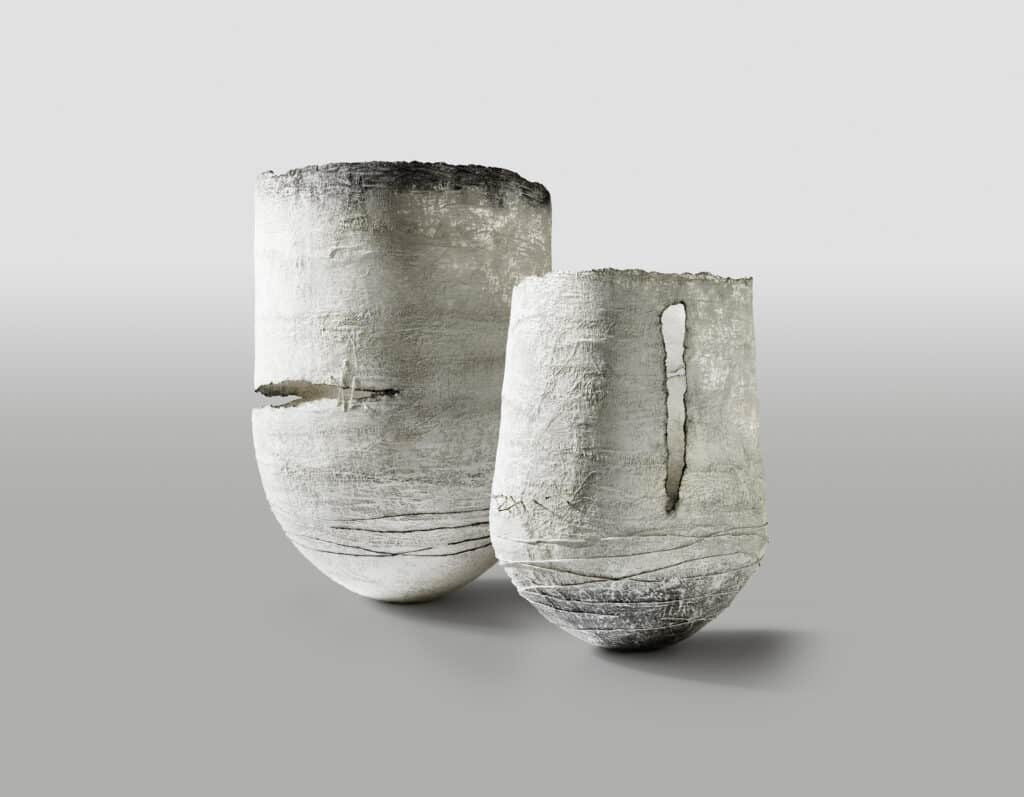 Gizella Warburton studied Printed and Woven Textiles at Manchester Metropolitan University, and Her current practice has its origins in stitched cloths. Though undoubtedly rooted in ‘embroidery’ and ‘patchwork’, Gizella experiments with and refines processes in a search to describe the way elements have imprinted themselves in my mind.

Fragments of materials are brought together in a similar way to collage or assemblage, with tiny holding stitches to capture layers. Gizella creates gestural marks with threads, paint, charcoal, and other media, and printmaking, felting, papermaking, and woven techniques may be involved.

She has always found ancient and humble textiles and primitive vessel forms particularly compelling;  the raw and worn simplicity of the weaving, stitching, binding and repairing bear the patina of our human histories. Gizella is drawn to materials which suggest a fragile balance; strength and legacy, yet susceptibility to wear and tear, permeating them with their own intrinsic tactile qualities.

Unique objects include framed, hanging and sculptural artworks and installations. Developments include works on slate and weathered wood grounds, printed and woven elements, and sculptural forms and vessels. 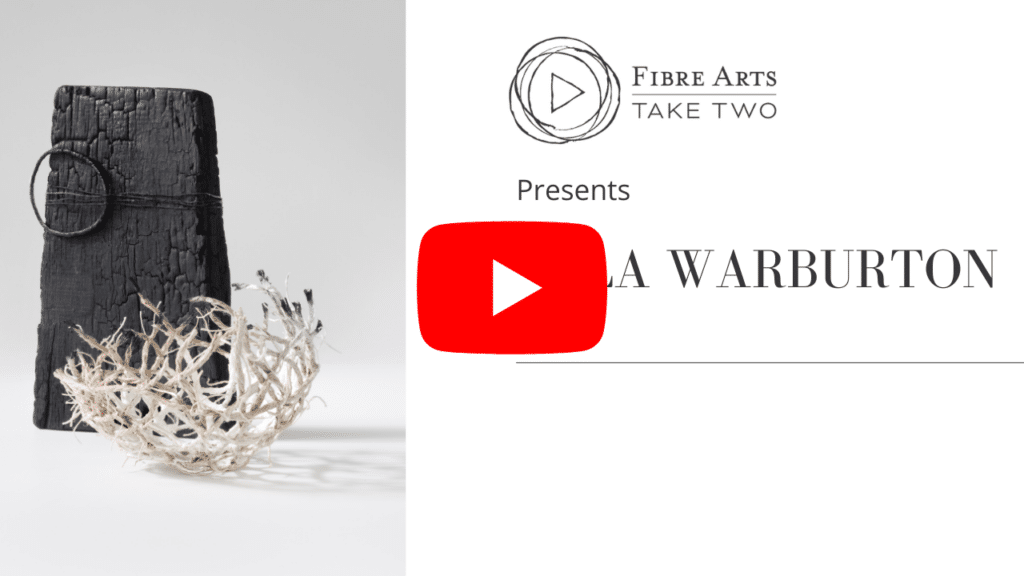 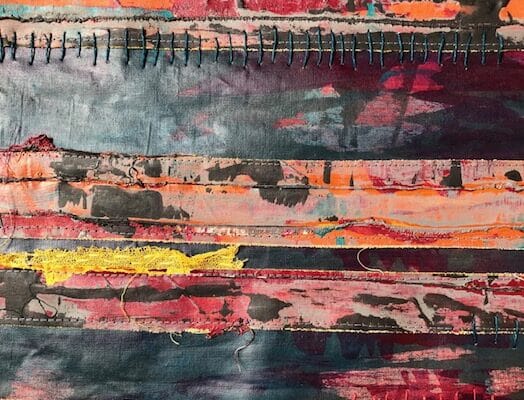 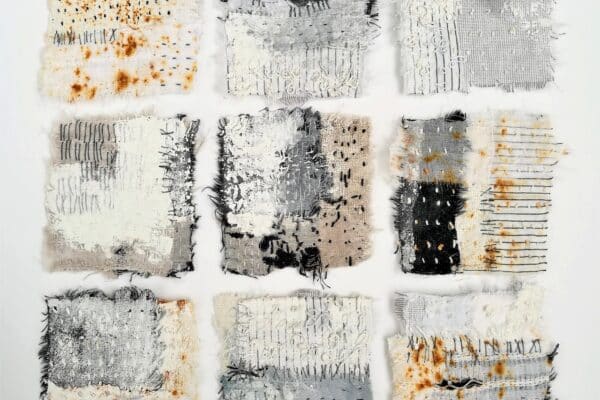 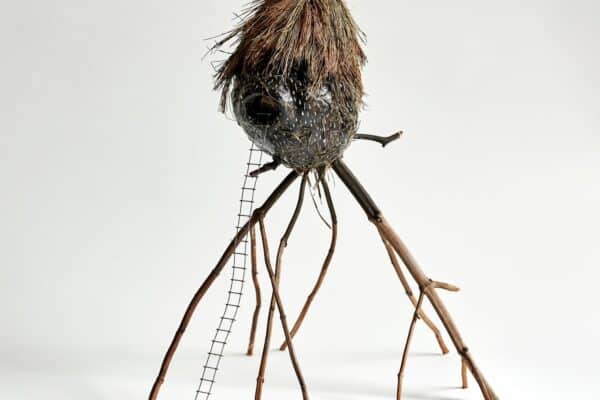