Shona Wilson is an Australian visual artist with an affinity for nature and small spaces. Fibre Arts Take Two chatted with Shona about her long career.

Shona’s Friday Feature Artist Interview can be found at the bottom of this page.

Shona Wilson is an Australian visual artist who lives on the New South Wales mid-North Coast. Her career producing commercial and exhibition artwork have spanned 30 years. In recent years, Shona has returned to her roots by creating one ephemeral artwork per day and has found both freedom and joy in the gentle, consistent collaborations with Nature Project. In the process, Shona has discovered the extraordinary in the ordinary, the magic in the everyday, generously sharing her insights and calm curiosity with students in her popular outdoor workshops.

By combining her love of small-scale assemblages and miniature installations as a springboard into potential large-scale public artworks and sharing her process publicly through live workshops, Shona has formed a well-rounded art practice that sustains her creatively and spiritually. 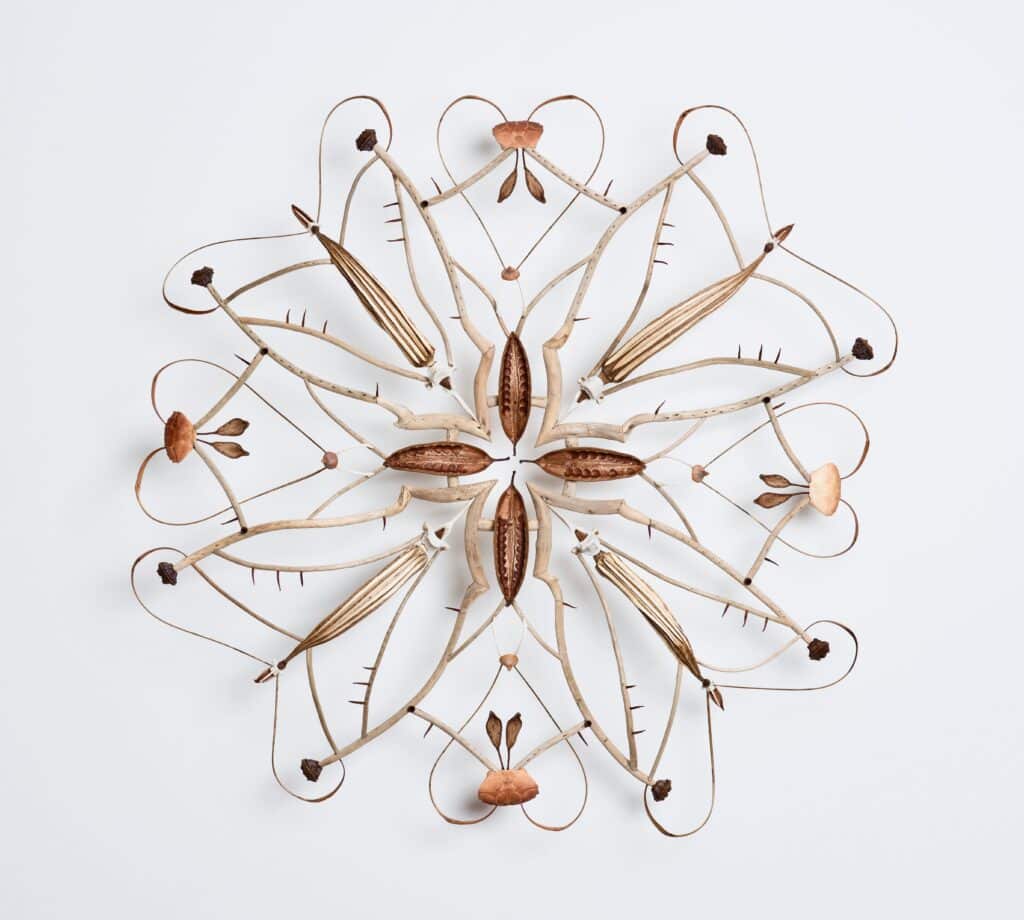 “Like everything in life, it’s a combination of hard work and persistence, but also some luck and fate,” Shona says of her journey to becoming an artist.

“My mother was a bush regenerator and a plant lover. We would go for bush walks every weekend when I was a teenager. And she would always be pointing things out in nature. Not just plants, but the clouds and small things and what’s beneath your feet and what’s above your head. She had a great curiosity, and she passed that on in those childhood years. My father was an architect so I watched him draw up these scale drawings and I think you can see that sort of architectural reorganising of the chaos of nature in some of my works.”

With a well-developed love of nature, after school, Shona pursued a career in the arts. “I studied at Sydney College of the Arts, majoring in sculpture. And then, in the third year of that course, I went to Nepal. I was on my own and I arrived in Kathmandu and was very out of my depth in this sort of ancient Gothic world. And I was walking along this street, and there was this tiny niche in a brick wall, and there must have been a deity or some symbol or icon in there, but it wasn’t in there anymore. I stopped to look inside this little dark hole, and as I did that, I realised the effect of looking at something really small and close up and how everything around me sort of dissolved and disappeared.

My focus was really tuned into this very small space, and that space actually took over my whole consciousness. So that was an ‘aha’ moment for me. When I started walking, then in the Himalayas, I started looking for small things. And they became my trademark.”

When Shona found the niche with its missing god, she went on to fill that void with nature. More specifically, with small spaces in nature, “I was looking for them, noticing them, sharing them and recontextualising them in the artwork, so people were able to see nature in a new way or with fresh eyes and with the same wonder that I saw.”

Shona still finds deep spirituality in her work. “It’s a very different experience when your whole body isn’t involved. If you’re not there in your body, if you’re just there mentally, then you’re not having a whole experience. You’re just having a mental experience. For me, I need all of my senses to be lit up to have that inflow, feeling connected with something other than myself. Time stops. That’s what I live for. That’s what I make work for, to experience that.” 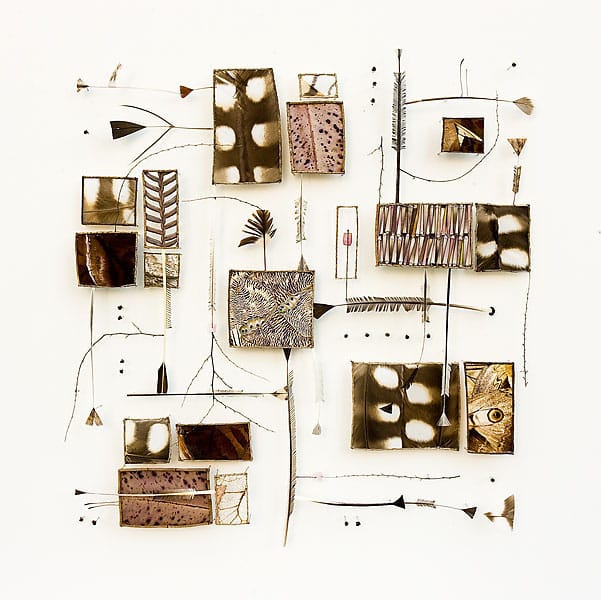 A large part of Shona’s work relies on collecting from nature. Recently, she has begun to rethink how she borrows from the natural environment.

“My boundary has really shifted over time. What I felt comfortable collecting early on, I would not necessarily collect now. In fact, I am not collecting anything new to bring into the studio except for wood that comes up onto the beaches. Everything else, I’m just trying to use up what I already have because now I realise that everything that I take is probably a home or part of a system.”

Her deep love of nature has helped Shona to consider the ramifications of human interaction with the world around us. “I think it’s good that it starts the conversation about what is reasonable. What is reasonable to take, and how much effect do I have on nature? We are also part of nature. How do we interact in ways that are maybe restorative, so the impact we have is a positive one? These are the questions that I’m more involved with in my practice these days.”

Shona is finding ways to continue collecting but maintain her ethical stance. “I collect from car parks. When you’re collecting natural materials in an urban environment, I think it’s less of an issue or a problem ethically. The environment isn’t pristine. We don’t really have any pristine environments left anymore anywhere in the world but that’s not to say that we can still just take willy nilly, in fact, it’s a reason not to take.”

At the same time, Shona believes that collecting can still be very rewarding. “I don’t want to frighten people from wanting to engage and wanting to collect because that’s part of our natural impulse, we see some, something beautiful in nature, we want to pick it up, we want to handle it, we want to, we want to take that little bit of beauty back home with us. And maybe we can do that, but then have it for a little time and return again or work ephemerally and just take a photograph.”

Shona advises aspiring artists to go with what they’re attracted to and to keep their faith.  “I am very choosy about what I collect. I go with what I’m attracted to. That’s, that’s my biggest tip, when anyone’s working with anything, to start with what you’re attracted to, what makes your heart sing a little bit. Or what makes you curious, because that will keep you interested in the work. It doesn’t have to be natural materials. It can be painted, or whatever your medium is, just the subjects, the things that you want to talk about. Stay with your heart and have faith in the process, that if you keep going you’ll get somewhere.

“There has to be some faith that something good will come. There are a lot of moments of unknowing. That’s the place, the creative space, where growth can really happen.” 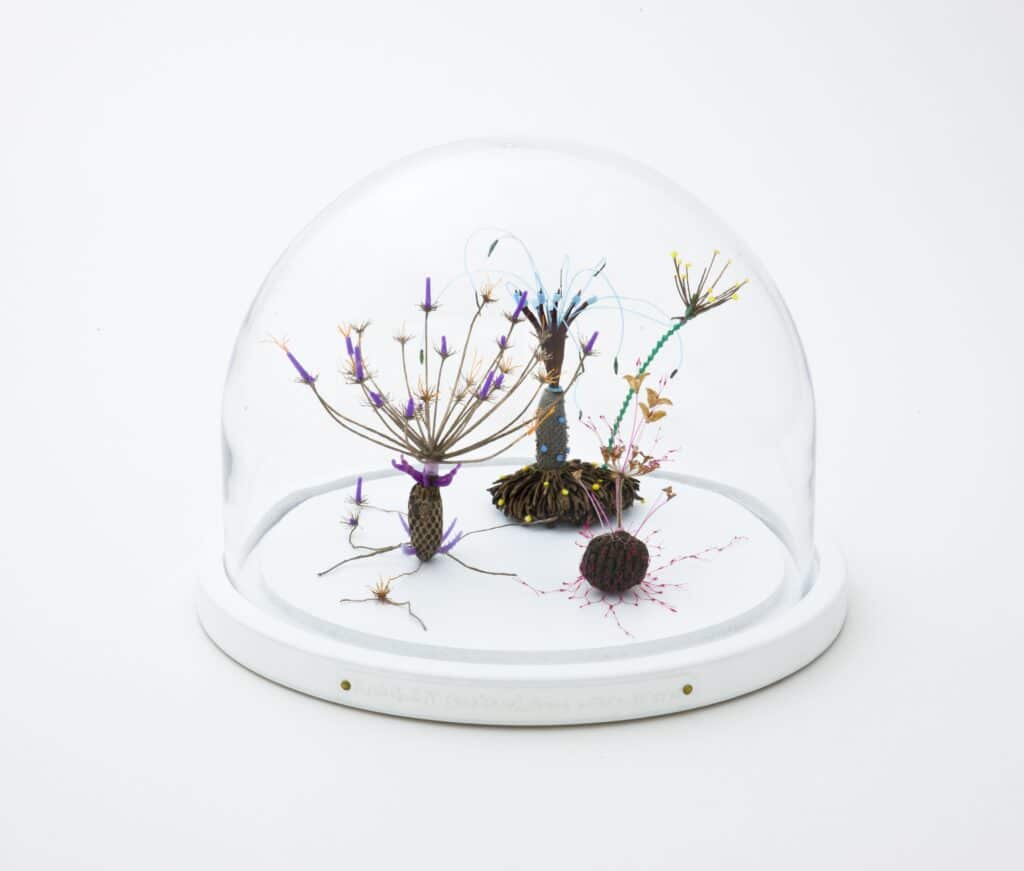 Shona Wilson is a contemporary Australian sculptor who has engaged with naturally found material to create abstract and representational 2-D assemblages and 3-D sculptures for over 20 yrs. Shona is the creator of the One A Day Ephemeral Art Project which has inspired people worldwide.

Shona currently lives and works on the NSW mid-north coast – Worimi Country – and is represented by Arthouse Gallery in Sydney and Artvisory in Melbourne, Australia. 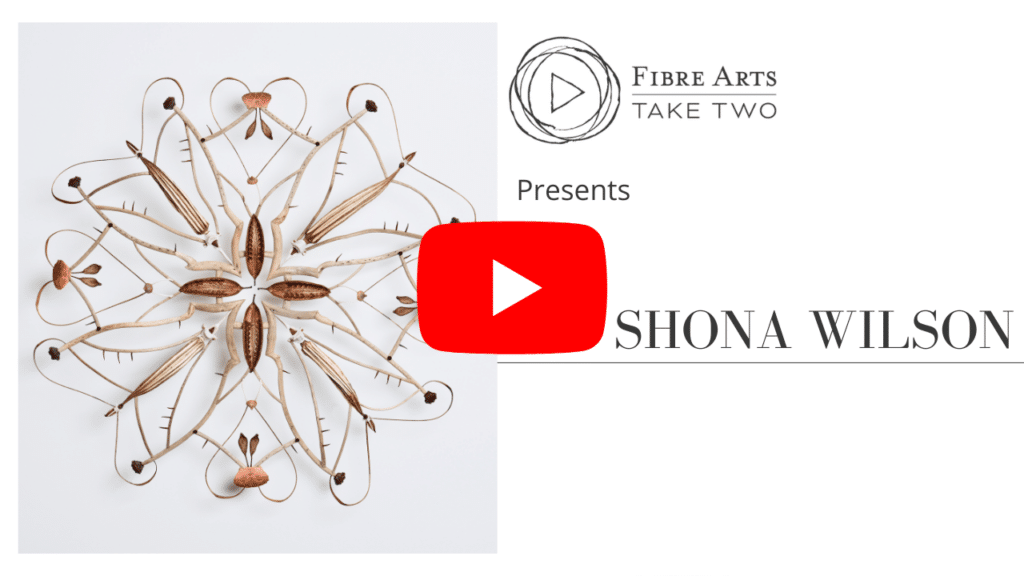