Ana’s Friday Feature Artist Interview can be found at the bottom of this page.

Artist Ana Žanić’s watercolour works evoke fluidity and calm yet also convey a dynamic rhythm and energy. Ana was born in Croatia and has double degrees; a Master of Fine Arts and art education from the Academy of Fine Arts University of Zagreb.

A series of Ana’s works with titles such as Flow, Earth, Migration, Origin, Cloud Trail to Arcadia, and Voyage take you through imaginary landscapes sometimes with a bird’s eye view, sometimes a macro zoom, but whatever the viewpoint is, the washes flow.

Ana has been living in the United States for the past 17 years and joins Fibre Arts Take Two from the suburbs of Chicago, Illinois, to discuss her work, life, and the joys of spontaneity.

As with so many artists, Ana found art early in life, “Part of it is just genetics since we have 12 professional visual artists who have degrees in our family, and we’re quite a small family. Some of them are painters, some of them sculptors, some of them printmakers.”

“My mom and dad have degrees in maths,” Ana says, and although her mother was an artistic soul, her own home was not full of artists. All the same, Ana says, “I was always surrounded by relatives, and it was just always present in our life as something normal. For me, that was a very natural organic path.” 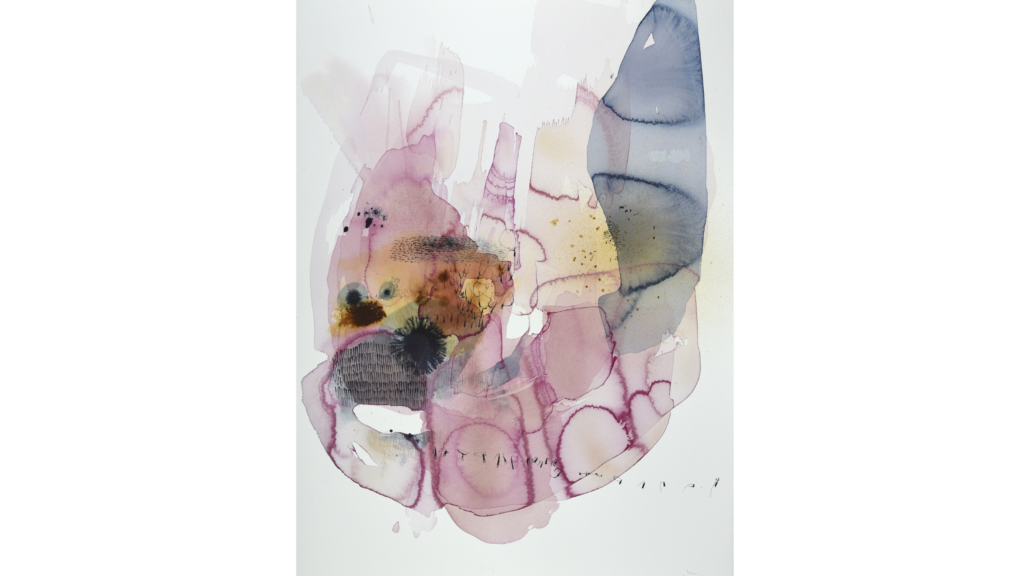 The joy of spontaneity

“I always like to embrace things that happen spontaneously,” says Ana of her artist process, “I like to play. That’s very important to me because I feel my work is soothing for me. It relaxes me, and it makes me happy, and it’s always important to me for it to be spontaneous.”

After her initial bursts of spontaneity, Ana likes to let her work breathe, “Once that initial part is done,” she says, “I usually will come back, and I will add maybe one more wash or two washes or some accent somewhere. Then I will start adding marks. And then, once I start adding the marks, I like to do a little bit and then let it sit and come back. I like them to build and give it time. It would be very hard for me to create one piece from beginning to end and then go to the next. I usually create several pieces that have the same feel and have the same palette.”

One exception to Ana’s spontaneity rule has been her very personal series, Migration, “With this series,” she says,  “I really did something different in terms of making a decision that I wanted to make some kind of note of the fact that I became a citizen because it was a very long process. When I moved to the USA, I was 26, and it was a cultural shock. I was thinking about this interesting situation where my husband and I moved, and it took us a long time to become citizens. And what it really means and what are we, and what is nationality? And what does it mean to be both Croatian and American?”

Ana feels her mark-making produces marks that are abstractly reminiscent of fish or birds, and this tied in perfectly with her migratory theme, “People migrate, birds migrate, and fish migrate”, says Ana, “It may be complicated and hard for us, as humans, to change entire continents but it’s a natural process. So that series when I made it was not in any way negative or, or nostalgic.” 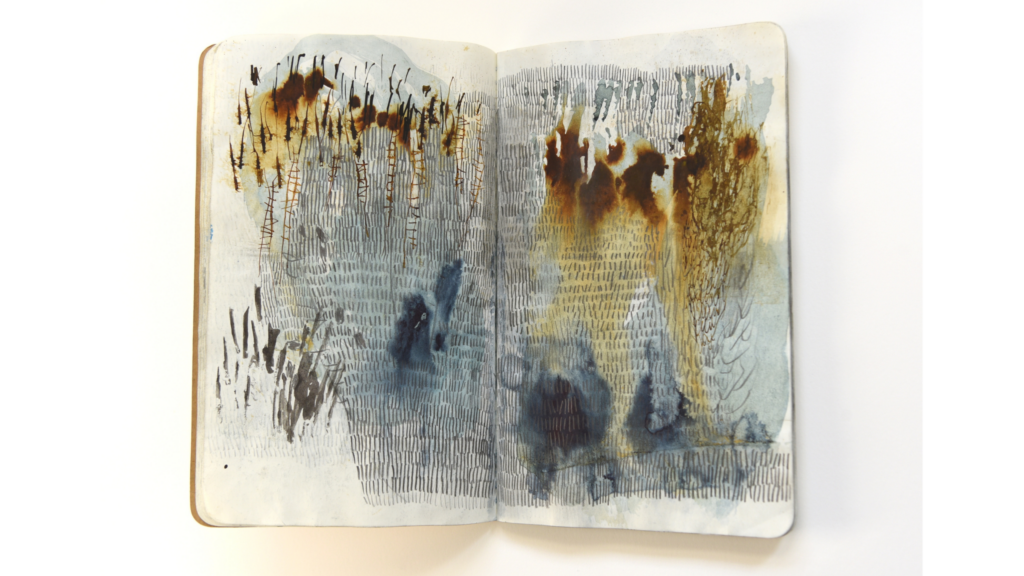 Migration may have been planned, but the story of how Ana discovered her recent burning technique, on the other hand, shines with her trademark love of spontaneity, “I was working on my Migration series,” says Ana, “And they were all on wooden panels. I wanted to add another component to the wood by burning it a little bit, so I used the torch to burn it. Then my son was playing with the neighbour, and they started playing with a big magnifying glass and burning paper. So I said to Albert, my older one, ‘Why don’t you use my watercolour paper just to see what kind of mark it’s gonna make?’ and it made this fabulous mark that was just like the burnt umber that I use anyways that was just beautiful.”

Go to the basics

Ana has some experience with working under pressure. “When the pandemic started,” she says, “My children’s school switched to online learning, so they were at home, my husband worked from home, and I was at home. It was challenging, especially since my younger one was just started kindergarten. I started doing these small sketchbooks with lots of marks and lots of mark-making that I could do throughout the day. Then once school started, I would grab a pencil. I didn’t need any complicated tools. I didn’t need any setup. I could go from one room to another, or even if we had breaks and went outside our doors, I could just carry this with me. I simplified the process.”

And this is Ana’s advice to aspiring artists when feeling under pressure, “When things are complicated, that’s what I do. And that’s what I would suggest. To always simplify, always go to the basics and to what feels good.” 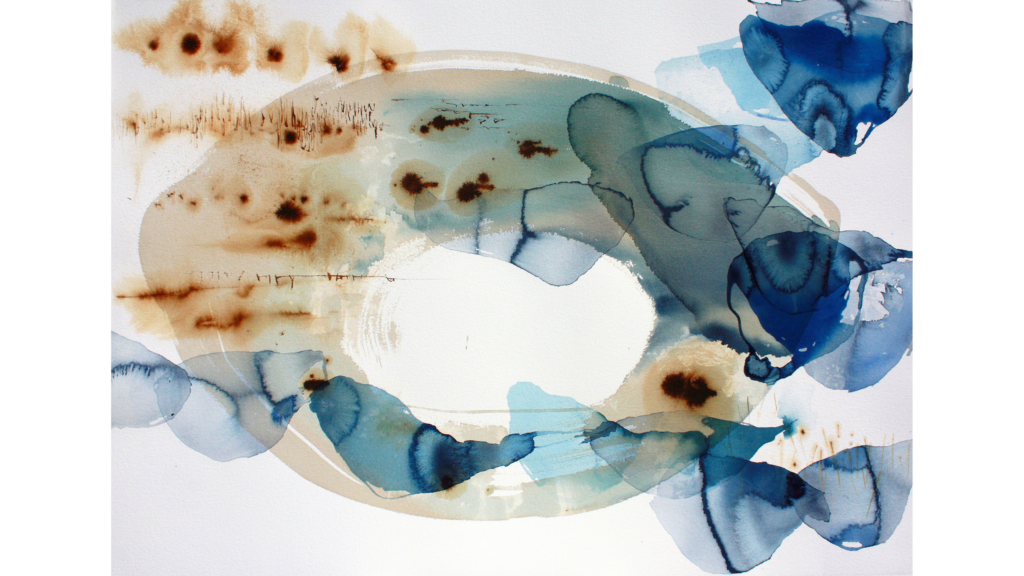 Ana Žanić’s art practice is an exploration of the formal visual elements, as well as her personal feelings, through an intuitive, spontaneous process.

Ana’s watercolour paintings are often reminiscent of imaginary landscapes and evolve through layers of washes, emphasising mark-making. There is a quiet tension between the watercolour’s fluidity, softness and calm versus the dynamic, rhythm and energy of drawing. The spontaneous and gestural activity of mark-making in Ana’s work is closely tied to calligraphy, language and symbolic communication.

In her process, Ana sees a metaphor for the duality of life, where certain things can be controlled while others happen spontaneously.

Ana has exhibited in numerous solo and group exhibitions, with her work in private collections throughout Europe, the USA, Australia and Asia. She is represented by several well-known galleries and was recently chosen among 66 women artists out of 1000s by axes tutorial team for their women artists to watch list. 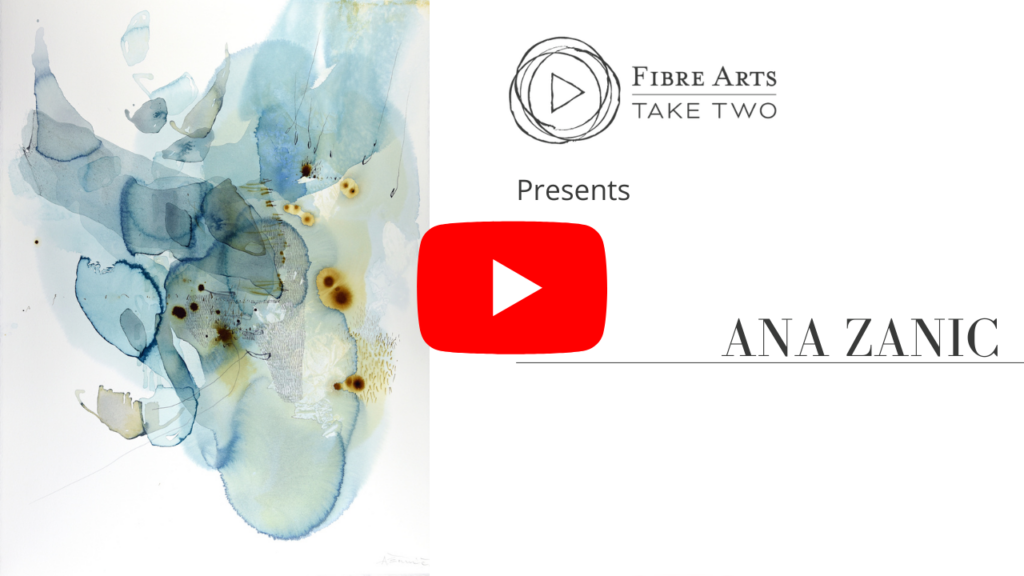